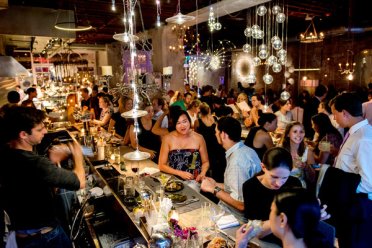 Jean-Georges Vongerichten’s ABC Cocina might be more rustic and noisier than its big locavore brother ABC Kitchen, but it takes itself a lot less seriously too. On one hand the impressively lavish menu seems to steer solidly in the direction of Iberian-inspired tapas, but then a sudden sharp turn suggests we’re on a runaway taco truck with no brakes, picking up a litany of multi-culti hitchhikers as we perilously head for the border. With a chipotle pepper here or a chorizo there, here a taco, there an empanada and everywhere a salsa…Vong has created the ultimate pan-Latin kitchen comedy, by masterfully staging a telenovela right in the middle of a bullfight.

Many of the usual suspects are re-imagined with new and exciting textures and flavors like adding hearty eggplant to the Spiced ground Beef Empanadas or laying landmines of crispy chicken skin with lemon zest into the Arroz con Pollo giving the otherwise mundane staple some unexpected crunch and purpose.

I was initially suspicious of the 24-karat gold roasted Patatas Bravas that were nested next to a pool of mysteriously dark and picante sauce suspended in the heart of an ivory aioli, but after mixing the liquids together and then dribbling them over the crispy nuggets, I found myself pleasantly overwhelmed in rosemary rapture.

Even though the woody-smoky-charcoaly Grilled Maitake Mushrooms were crowned with melted herb goat cheese, their tart Fresno pepper vinaigrette might have shifted the earth on its axis by a hair. 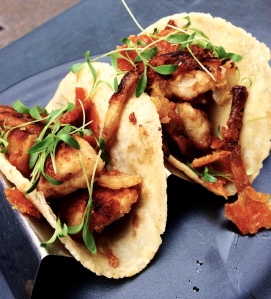 Of all the gourmet Taco options, the Chipotle Chicken seems to have done the best job at already establishing its own fan club and Twitter account. But as delectable as it might have been, with just the right amount of fuss you’d expect to find inside a floppy masa shell, something was definitely missing. Too dry? Too crunchy? Turns out the grilled Jalapeño salsa was left in the kitchen and only arrived after we had digested the final morsels. Oops! But the sublimely moist and flavorful Grilled Chorizo sausage arrived with all of its parts fortuitously present.

While things may have changed slightly since former chef de cuisine Dan Kluger left the ABC’s to start his own venture, his footprints for success are still well-entrenched in these polished-concrete cocina floors. ¡Esta bien!