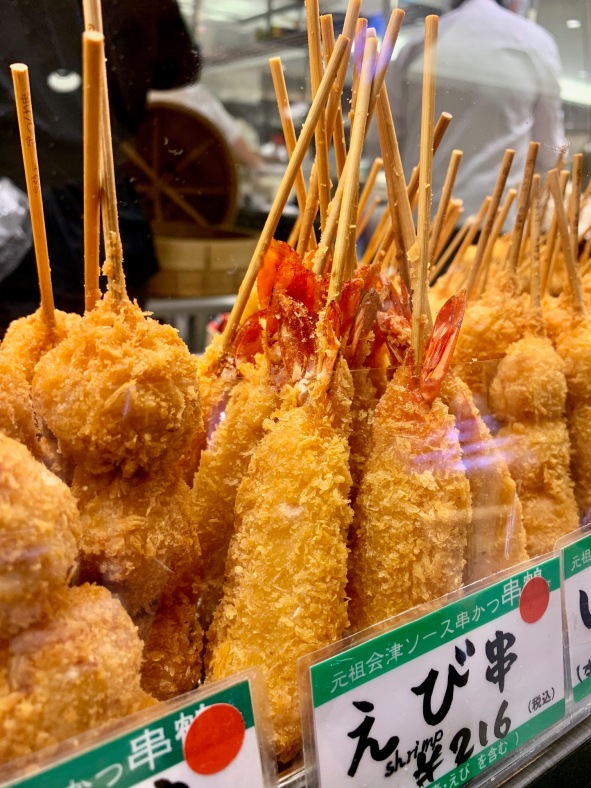 Tempura on a stick, Mitzukoshi Ginza

Just because Tokyo has the most restaurants with the most Michelin stars in the world, the unknowing traveler might feel bullied into enduring a quizzically vexing and rather fruitless reservation maze in trying to secure high-brow, high-cost, high-demand tables – assuming that’s where the best food must be, right? Wrong! The overall standard and quality of Tokyo’s food is so high, that even low-brow options are quite simply and utterly magnificent. This includes street-side establishments and those several feet below.  For just a few Yen, you can enjoy the best meal you’ve never had. 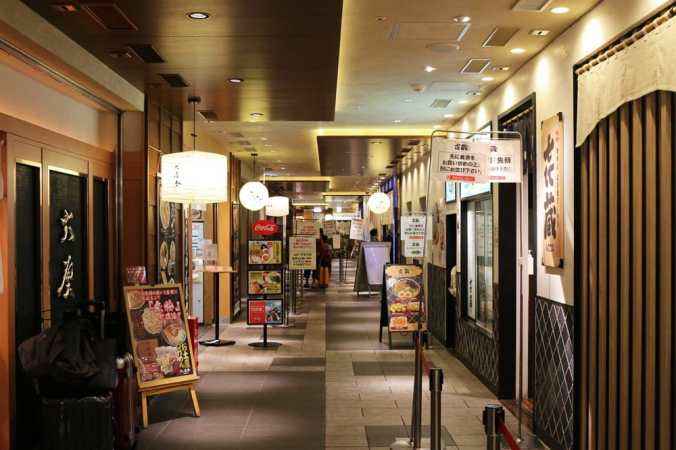 Subterranean food scares most people. And in most cities, it’s warranted. The carte blanche invitation for pigeons, rats and other vermin to indulge in the culinary trash of their choice so conveniently located next to the subway system is hard to ignore. But for Tokyo, not only do the spotless stations offer the freshest and best tasting options, the longest wait lines are actually one level below. Ramen Alley and Kitchen Street, both located beneath the train tracks of Tokyo’s main station are a hive of popularity from 11am to 11pm every day. Some of the countless establishments are so coveted that foreign travelers – still pasty and stale from an international flight – will endure the barrage of humanity to schlepp luggage down long corridors just for a bowlful of sheer deliciousness as their very first Japanese priority.

If you’re in the mood for noodles, head down Ramen Alley. The line for each of the stalls ends at a giant ATM, where you insert cash, punch in your order and hand the ticket to the staff. Then, a steaming bowl finds its way to wherever you are sitting in under 4 minutes. 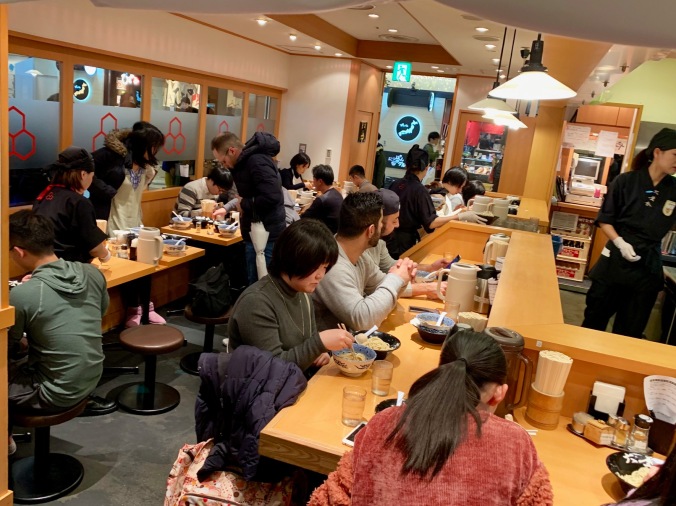 After an eternity of inching forward in the longest line of them all, I finally noticed that I was standing on a large sticker that read: Rokurinshu Tsukemen – 30 minutes from this point! 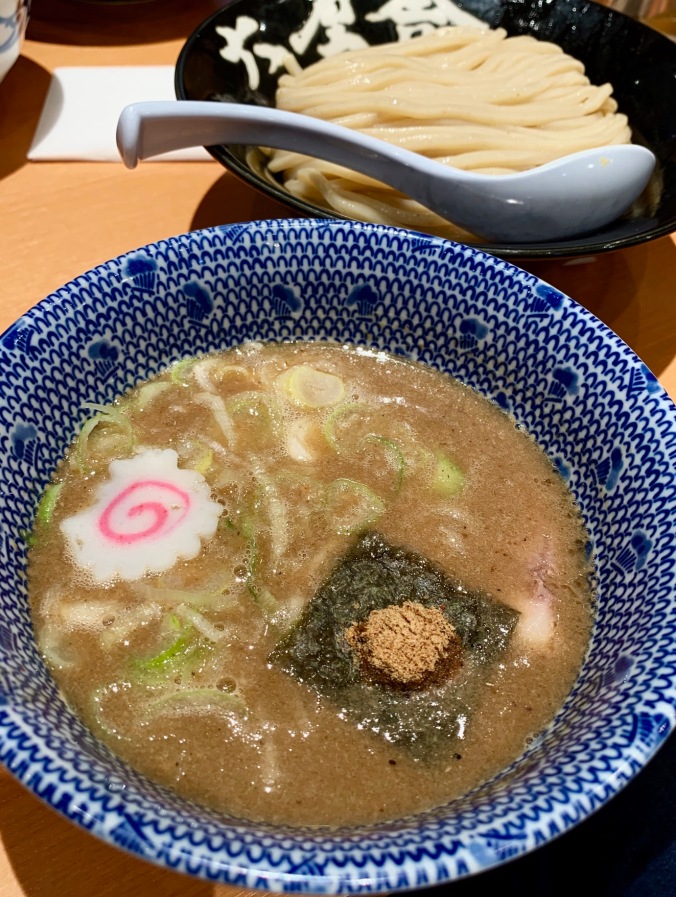 Quick lesson: Ramen usually consists of noodles, meat and vegetables served in a clear or creamy meat or fish-based broth. Tsukemen, (a warm weather favorite) has slightly thicker, cold noodles served separately from the pork and chicken bone-based broth. The idea then is to dip the cold noodles into the hot broth, thereby warming them up as much or as little as you prefer, and then slurping them down with a symphony of surprisingly encouraged sound effects. Mouthful after mouthful of pure umami bliss. 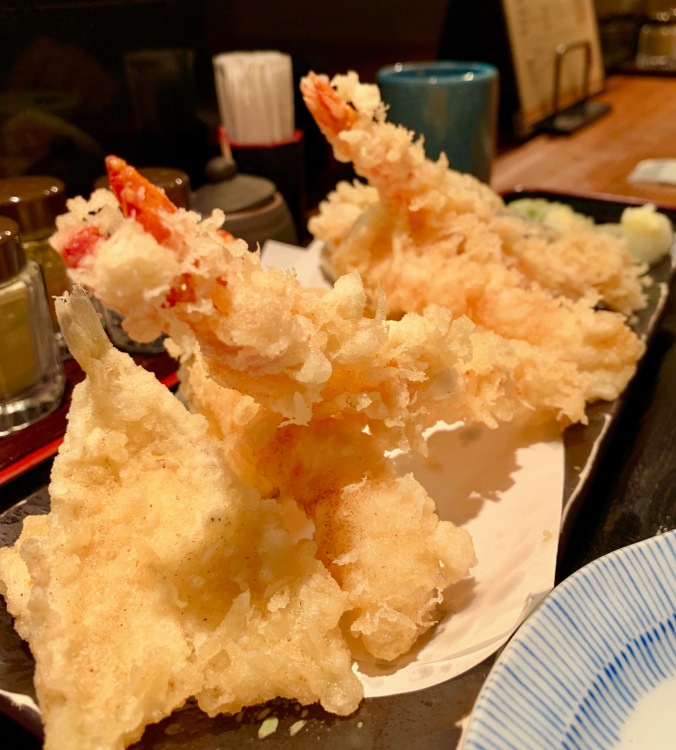 Kitchen Street on the other hand has a wider variety of Japanese (and some western) snacks. One of my favorites is Tempura Keyaki. The house-blend of sesame and vegetable oils gently cooks large shrimp, Japanese eggplant, beans, cuttlefish, eel and lotus root to a spectacularly crunchy and un-soggy, golden crisp right in front of you. After you baptize each steaming item into the dipping sauce, your taste buds get a delectable workout in contrasts between soft and crunchy, hot and cold, sweet and salty, yum and yummier.

Still within the station campus but a little closer to the high-speed train platforms, are a warren of Bento Deli’s that produce the most ridiculously appetizing wooden lunchboxes of all shapes, colors and sizes that feature multiple geometric sections containing a bright and colorful smorgasbord of Japanese delights: Sashimi, pickles, edamame, omelet, sushi rolls, breaded meats…and an even more handsome variety of cookies and chocolates all smartly gift-wrapped for your upcoming voyage. 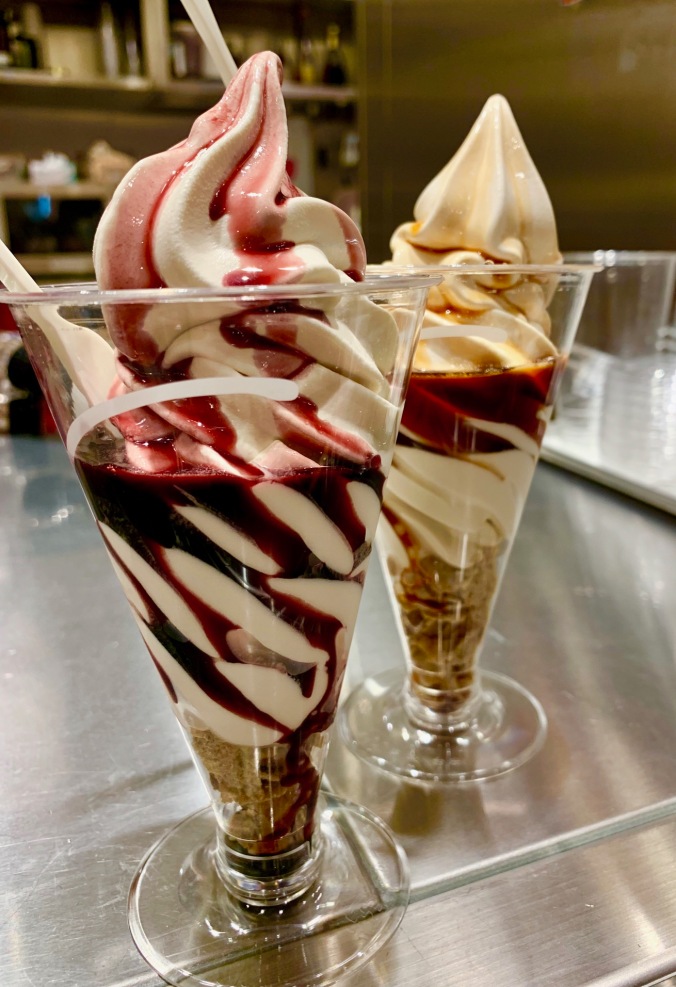 After a veritable sampling session from east to west, we stumbled upon a rather peculiar dessert bar serving soft-serve ice-cream topped with your choice of something called Fruit vinegar. Expre-su offers a variety of sour dessert syrups including Yuzu lemon, Cocoa, Blueberry, Strawberry and something called Christmas. Talk about an explosive wake-up call for the taste buds when your sweet center recognizes (and appreciates) the ice-cream, but your sour center simultaneously goes into shock mode as the vinegar hits the back of your throat. Yet another sensory delight that had to be repeated. Daily. 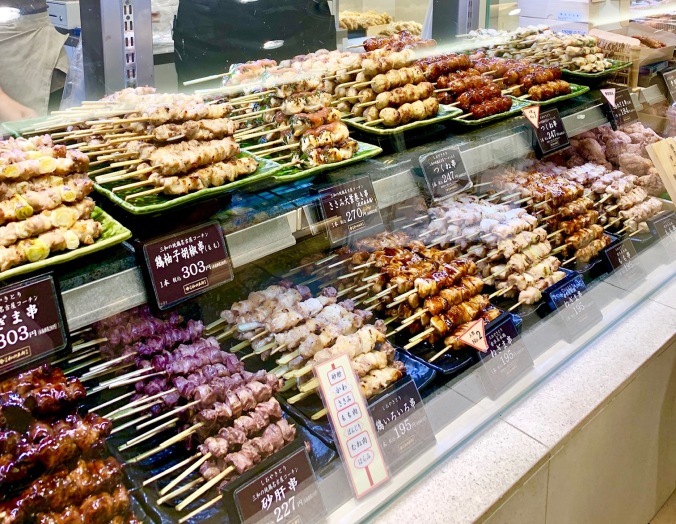 Moving beyond the train station, but still well below ground level, are the food halls that anchor each of Tokyo’s major department stores. Daimaru, Isetan, Sogo, Matsuya and many others all compete for the most tantalizing display of fresh and cooked foods to lure the lunchtime crowd, but none are as opulent as the Mitzukoshi flagship in Ginza. Row after row of the most salivatingly cravable bites from abalone to yakitori and everything in between. 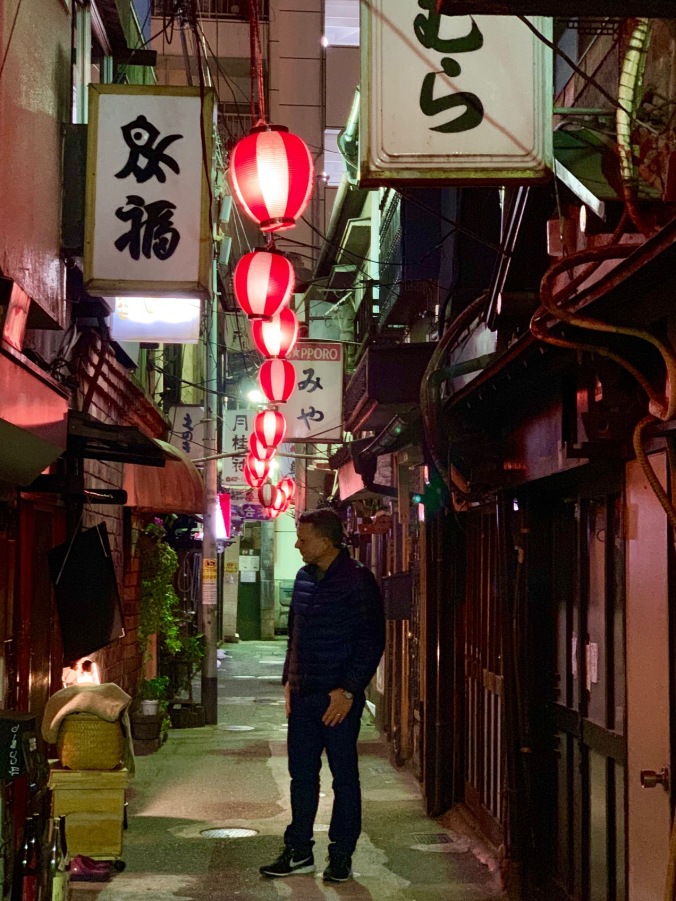 Just around the corner from the crush, noise and lights of Shibuya Crossing are a series of lantern-lit back alleyways called Yokocho, with 5-10 seat snack bars that date back to the second world war. Among them, the Golden Gai, Omoide, Harmonica and Sankaku Chitai often feature bars that only permit locals, but we ambled through Nonbei (drunkards) Alley to a room no larger than an elevator called Appre Yumiko Sasame. 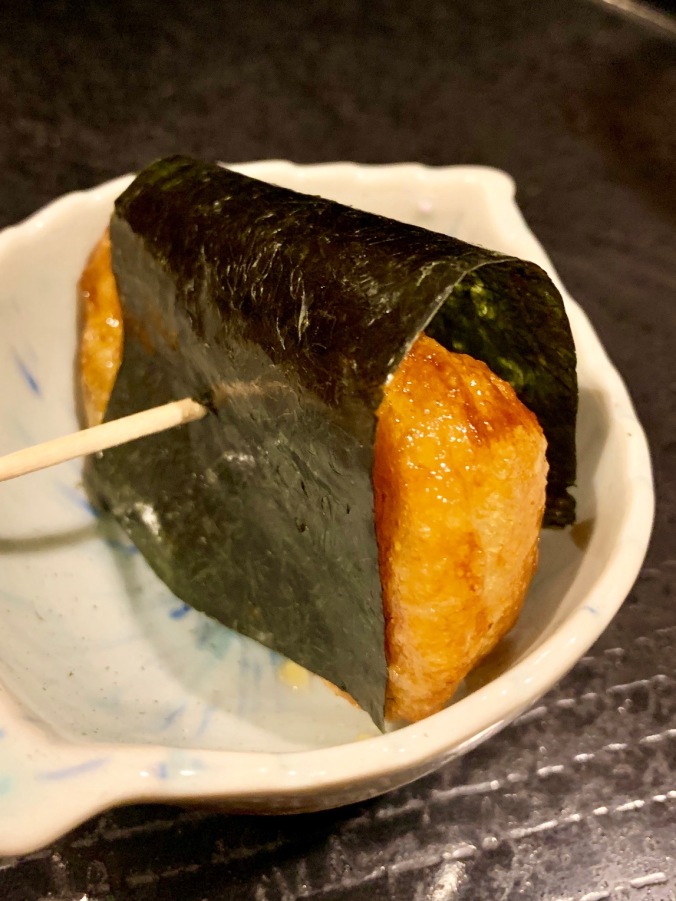 The two charming proprietors went to all sorts of trouble to try and translate the names of each dish of Kyoto style appetizers that included pickled Japanese carrots and sweet potatoes, the most delectable slither of fried rice-dough wedged between a strip of nori, and their house specialty – Pan fried duck with Japanese green peppercorn sauce. Fresh, flavorful, salty, umami and utterly amazing (even though we had to vie for some table space between all the pots, pans and other cooking utensils.)

Aside from Ramen and Tsukemen, my all-time favorite noodle dish would have to be Buckwheat Soba, and no-one does it better than Abura Soba Shibuya. Instead of a broth, the noodles, veggies, shredded pork, scallions and bamboo shoots all sit on top of a thick, secret, spicy-soy sauce that you stir up after adding a few squirts of vinegar, a few squirts of chili oil, a few spoons of chopped onions and some black pepper. Suddenly the noise of the world disappears along with your manners, and you slurp up heavenly bite after heavenly bite of the most indulgent, unbridled food vacation your tongue has ever been on.

While on the subject of indulgence, no trip to Tokyo would ever be complete without at least one slice of Tonkatsu (pork schnitzel), and the best place to find it is at Butagumi – a curious little wooden house with a moon-shaped window, that just so happens to be on every chef’s must-eat-when-in-Tokyo list. Don’t be fooled – while the building might look like a fairy tale, the Tonkatsu is more Superbowl than 3 little pigs. Here, in addition to picking a species of pig, or where it was raised, you can also select a particular cut (sirloin, tenderloin, shoulder etc.) and your preferred thickness and fat content as well.

The result is a flaky, fluffy, crunchy panko crust (without a trace of oil), surrounding a few slices of the pinkest, juiciest, most tender cutlets you will ever encounter in your life. And that’s before you add the special sauce, mustard and slaw.

So, never let it be said that only the best things come from above. Sometimes you might be standing right on top of them.