The newest venture from the Mozza group is an uncompromising carnivore’s delight. Wedged between Mozza and Mozza2Go on what is fast becoming Hancock Park’s hungriest block, Nancy Silverton and her team have given birth to Chi Spacca – a holy shrine to flesh. The rust colored, black shelved room boasts a demonstration-style kitchen that harkens to the space’s former life as an experimental cooking lab and slaughtery. Chef de Cuisine Matt Colby’s comprehensive knowledge of protein and all its complexities, yields a daring menu that shows off his proudest contributions to the LA food scene.

Sectioned into unrelated chapters rather than sequential courses, Colby offers diners (of all appetites) a rather arbitrary range of small plates including ricotta stuffed Squash Blossoms, honeycomb and hazelnut adorned Pecorino, a selection of Pane Bianco (Bruschettas) and house made Pickles.

There’s no mistaking his Focaccia Di Recco for any conventional Focaccia you’ve ever tasted. This one is a crusty, fluff-less flatbread, smothered in a melted salty-sweet Stracchino cheese and dribbled with olive oil.

His on-site salumeria houses more than a ton of meat (quite literally), aging and curing for up to 2 years before being served on planks as Affettati Misti, a heavenly selection of salami’s, lardo wrapped grissini sticks, a coarse butchers paté and the most delicious fritters made from pigs trotters and chunks of smoky pork.

Salads and sides include a wondrous roasted Cauliflower smothered in a rich Bagna Cauda (anchovy, garlic, lemon) and grilled Broccoli in a lemon vinaigrette.

The larger plates grow in portion and price from the delicate bacon wrapped veal Sweetbreads to a honkin’ 50oz Bone-in New York Steak. Traffic-stopping favorites are the Milk-Roasted Pork Loin and the Bistecca Fiorentina (Florentine steak), which requires 45 minutes to roast and arrives with the bone upright, (obviously proclaiming man’s victorious domination over the cow) and a domino row of salt charred (yet rare) medallions of melt-in-your-mouth, succulent, tender, dry-aged beef in a pool of olive oil. No sauce, no spice, no need. (Just the faintly muted sound of a grown man crying!) 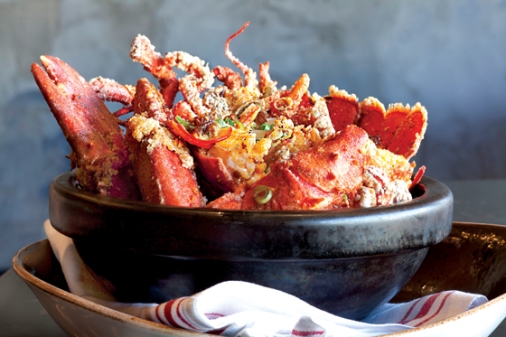 If ever held to gunpoint, I would probably relent and confess that Southeast Asian cuisine is indeed my favorite. But that doesn’t mean I’m a complete pushover when it comes to lemongrass, fish sauce, ginger and chilies. In fact my expectations only heighten with every attempt at that very delicate balance between spicy, sour, sweet, salty, nutty and citrusy. Very few toques do it well, but California native chef Tin Vuong’s unapologetic approach to the flavors of his heritage is nothing short of a Cirque du Soleil Big Top extravaganza for the taste buds.

Vuong’s third restaurant Little Sister is rather quizzically located in sleepy Manhattan Beach, (not exactly the food capital of Southern California) but his following is far reaching and his reputation is deservedly growing. 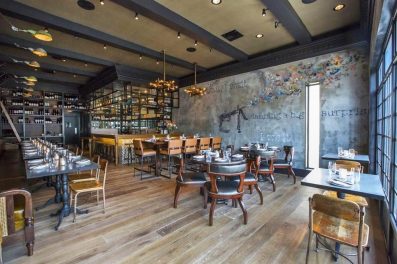 The room is framed in concrete, glass and wine with antique cobbler lamps and vintage schoolroom chairs that feel cool and eclectic yet utterly comfortable for the task at hand.

The menu is vast, comprehensive and rather daunting for the beach crowd in search of something “simple without cilantro” or “not too spicy”. And in addition to the borderline ebullient wait staff recommendations, you are summarily warned that the food arrives when the food arrives!

The first to appear were two of the Eastside 626 Provisions (the area code for the densely Vietnamese San Gabriel valley area): crispy and minty Fried Okra with tomato, lime and fenugreek and the sweet and tangy Ma La Pickles with Szechuan peppercorns and crushed peanuts, a gentle warm-up for the sharp ginger tamarind Duck Sate kebabs over caramelized pear chunks with almonds.

The tandoori-styled Grilled Prawns with lemongrass-cilantro tossed green papaya, mango and cashews was the perfect curtain-raiser for the x.o. Pea Tendrils with a shock of lime and the deep, dark ocean flavor of dried scallops. Next to arrive was the Kima Platha, an ultra thin crispy flatbread envelope stuffed with mint and chili infused lamb surrounded by a sea of curried lentil dipping sauce. 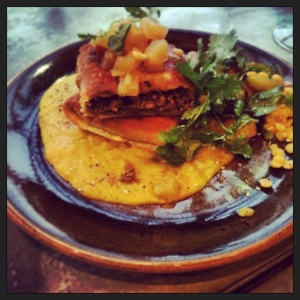 And for the most daring act of the evening (preluded with shell bowl and steaming towels): the show-stopping and utterly delicious Salt n Pepper Lobster. Sectioned and cracked in advance of being flash-fried with seasoned panko, the crustacean pieces are then wok fried with a bright and merry medley of shallots and chilies to engulf their flavors both shell-side and flesh-side. And for an encore, any remaining lobster meat is then returned to the kitchen for a crispy jasmine rice stir-fry with strips of smoky Thai pork sausage. Neither the quirky choices for a trio of desserts and gelatos, nor the equally arbitrary French cheese selection could dampen this culinary standing ovation. 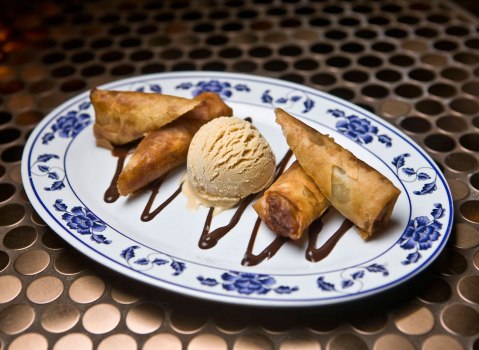 Comparatively speaking, adding any derivative of the word “Pig” to the name of your venture has been a pretty good omen for many restaurateurs in New York. Not sure whether it’s fun, courage or luck that the “other white meat” offers, but it certainly seems to translate into popularity and longevity. There’s April Bloomfield’s furiously acclaimed Spotted Pig, Danny Meyer’s impossible-to-get-into Maialino (piglet in Italian), happy-hour all-time-favorite Swine, Brooklyn’s BBQ indulgence palace Fette Sau (fat pig in German), sandwich palace Porchetta (deboned pork roast in Italian), lunchtime office crowd favorite chain Potbelly, or Traif (anything on the “verboten” list for good Jews – such as pork or shellfish in Yiddish) and so it’s scarcely surprising that newcomer and Top Chef alum Leah Cohen is already thinking of opening a gastropub knock-off of her South-East Asian hipster canteen Pig and Khao. 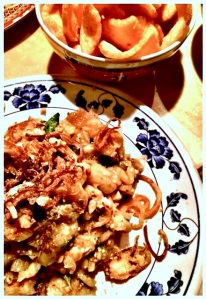 Whatever happens to be on the grill or in the fryer permeates the simple rice-noodle-thin slither of a room with open kitchen and back patio. The overwhelmingly Thai menu (thankfully omits any of the “Big 5” dishes) includes some Filipino and Vietnamese influences as well.
Cohen’s cocktails are every bit as intense and flavor-forward as her food. From her take on a Negroni with grapefruit and cardamom, to a chamomile-infused Rye with elderflower and a “scotch rinse.”
The Burmese Eggplant Salad is like an Asian, peanut, mint and shrimp version of a Babaganoush dip – made even more unstoppably edible thanks to the homemade slightly sugary shrimp chips.

The Green Mango Salad sitting under a dome of char-grilled chicken and dried shrimp and cashews for crunch, bathing in that unmistakably flavorful and salivation provoking fish-sauce/lemon grass/chili dressing, feels a bit like the big brother of the Green Papaya Noodle Salad with grilled shrimp in a tamarind chili dressing. Both noodle dishes are crowd favorites. The Shan Noodles with ground chicken and turmeric, and the heavenly Khao Soi .

A velvety smooth, Thai-iced-tea colored coconut curry with chicken, shallots and mustard greens topped with a centerpiece of egg noodles – the bottom half of which are softly submerged in the curry, leaving the top half exposed and crispy.

For our pork dish we tried the meat-falling-off-the-bones BBQ Baby Back Ribs. While the exact ingredients of Cohen’s barbecue sauce remains a secret, suffice it to say I would happily lap up the gingery-garlicky-syrupy deliciousness even if it were poured over MTA subway tickets or second-hand tennis shoes. 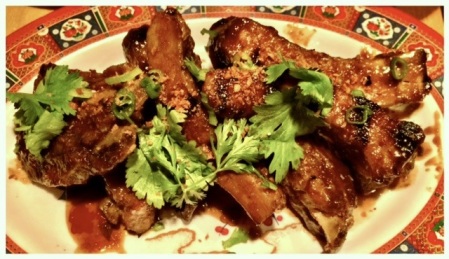 For dessert we tried the Turon, which is a banana smartly dressed up in a rice pastry jacket, before being flash fried and perfectly paired next to salted caramel ice-cream and chocolate syrup.
It’s fairly safe to say that Clinton Street has yet another runaway hit on it’s sidewalks. 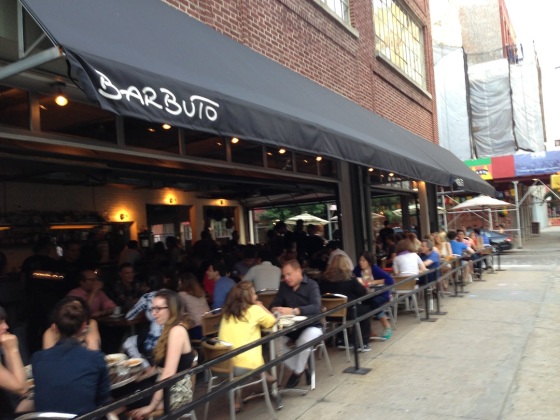 There’s nothing new about food being an addictively mood-altering drug. But less obviously the entire dining experience can also heavily influence your frame of mind. So no matter how hard you are trying to be a witty contributor to the conversation, by practicing those well-rehearsed one-liners on new ears, when your focus is distracted by a brusque waiter with sub-zero peripheral vision who seems to be the only one in the entire state who cannot see your wildly flailing arms in search of a replacement fork, or when one of your guests’ appetizers seems to be coming from Cairo on the back of a camel, even the best food won’t do much to bring back your mojo. So when a decade-old, all-time local favorite like Jonathan Waxman’s rustic Italian Barbuto ceaselessly delivers sensational evenings to remember, you can’t help but do your happy dance.

With the large garage doors open on two sides, Barbuto spills out onto the West Village sidewalks like a prime corner on an alleyway in Rome. The open kitchen feels fresh and approachable – but you wouldn’t dare get in the way of the furious activity that delivers hit after hit to table after table, night after night, year after year. 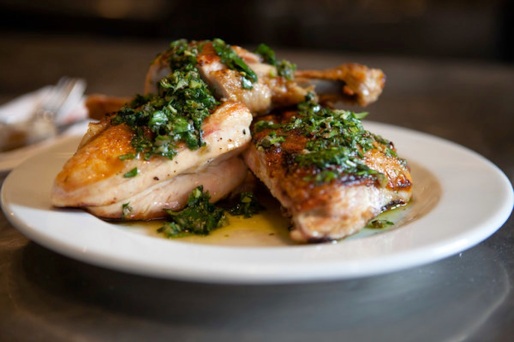 While there is an abundance of seasonality to the menu, it is also a multi-year collection of some of New York’s favorite dishes, so much so that the first items (below the drawing of a bearded mutt) are Waxman’s two published cookbooks “A Great American Cook” and “Italian my way”. The service is both fun and flawless. Rapport is obviously encouraged and our waitress instantly became our fifth guest at the table.

This week’s Bruschetta hosted a generous helping of Burrata and a dribble of Balsamic and two highly unlikely but utterly delectable companions: strawberries and pistachios. The Risotto Frutti di Mare with succulent shrimp and scallops couldn’t have possibly been any creamier. The Colorado Lamb with Bell pepper and onions had a thrilling but subtle spike of heat along with a luxurious au jus, while the recipe for the pork/veal/beef Bolognaise served with Gemelli pasta deserves to be immortalized behind glass, right there next to the Declaration of Independence. 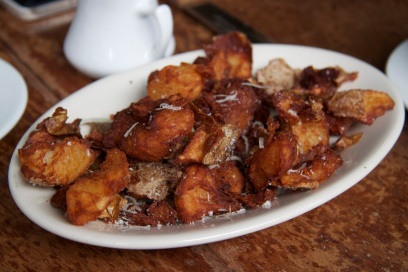 The blisteringly crispy Patate (potatoes cooked with garlic, hand-smashed and then deep-fried before being sprinkled with Pecorino and rosemary) are so ridiculously devourable – little wonder they were able to stage their own disappearing act.

But the dish that will (hopefully) never vanish from the menu is Waxman’s illustrious “JW” Pollo al Forno with salsa verde. The pan roasted half-chicken couldn’t be more simply prepared with a little olive oil, lemon, sea salt and pepper, but the countless interruptions for basting make this flightless bird soar higher than any other. Topped with a mouthwateringly flavorful green mix of fresh herbs including tarragon, oregano, sage and mint with anchovy and garlic – you have the recipe for sold-out tables well into the next decade.

Desserts include many local favorites too, like the thick, creamy and indulgent Chocolate Budino served in a Capuccino cup with two biscotti or the Chocolate Coconut Cake, which is what happens when Tiramisu, Coconuts and Almonds are left alone to make a baby. 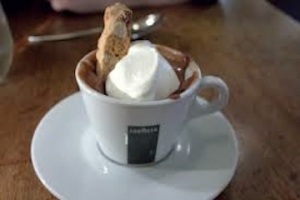 Barbuto might mean “bearded” in Italian, but for most of us it means “Be back!”