It is with the utmost relief to finally indulge in two of New York’s hoopla hotspots that have been stuck on my “to-try” list for an annoying eternity. Pok Pok NY, the (at one time) Michelin-starred northern Thai import from Oregon (of all places), and San Francisco native Danny Bowien’s Mission Chinese Food. 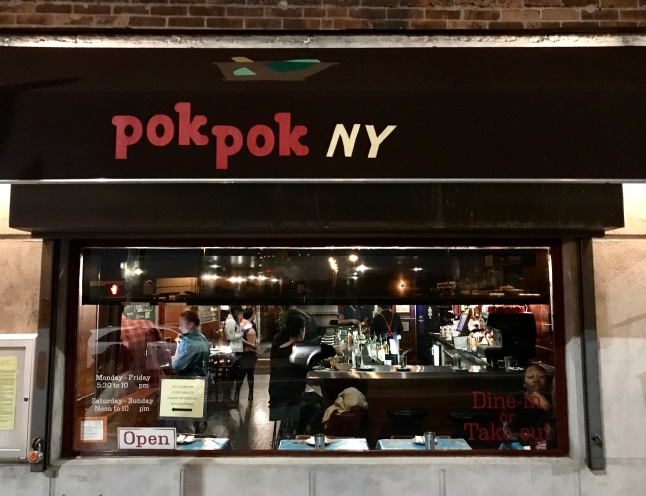 Pok Pok NY is marooned in one of the most maddeningly inaccessible neighborhoods of Brooklyn requiring a car, a driver, nerves of steel and quite possibly two forms of government ID. When Andy Ricker opened Pok Pok Wings in Manhattan a few years back, I idiotically refused to trek all the way down to the Financial District to sample his über-celebrated chicken wings, only to have to settle for a 2+ hour waiting line instead. And just when I finally overcame my chronic impatience, he went and shut the place down. Karma.

And ever since Mission Chinese Food reopened to a tsunami of public gratitude in its current location (after an unmentionably embarrassing incident involving tenants of the rodent variety), tables have been as scarce as subtlety in Las Vegas. But to make matters worse, Mr. Bowien insisted on listing his Asian-fusion moneymaker on Reserve, the most infuriatingly eye-roll-worthy app of all time (who notoriously forget to remind you of your forgotten passwords!) And furthermore, 411 and Google still offer diners a “mystery” phone number that has yet to be plugged into an actual phone. So, if you have a few millennia to kill, I dare you to call (646) 707-0281 just so you can hear a ring tone that easily lasts longer than Cher’s multi-platinum career.

Despite the fact that Mission Chinese sits on the border of Chinatown’s glut of Asian dried fish stands and hole-in-the-wall noodle shops with inverted red ducks swinging in the windows amid incessant signs offering “Take-Out” (which smell as if they should have been “taken out” ages ago), it feels more like a Quentin Tarantino movie set. Not that a gunfight massacre wouldn’t be appropriate, but more so because of the funky red velvety booths under alien-star lamps with an unstoppable hip-hop soundtrack. You might find a dragon or two punctuating the raw brick walls, but you won’t find any standard fare on the atypically short un-Chinese menu. Most of the items carry one or more “fire” symbols that are by no means decorative. Take heed. These dishes might all be genuinely delicious, but they are certainly not for the faint of palate. We inhaled the Spicy Peanut Noodles with abandon, enjoying the many wonderful layers and flavors beyond the lemon-grass and garlic. Things elevated a notch with the Thrice cooked Bacon, which entirely deserves its own Instagram account. Smoky sections of soft, barbecue-y bacon strips clinging to sticky slivers of tender rice cake medallions, darkened by the most wondrous Szechuan pepper glaze.

I could go on and on, but by the time we drenched the bracingly spectacular Mapo Tofu over a puddle of rice, it was time to summon those brave gentlemen from the 15th fire truck precinct a few doors down. There was a moment when I began to worry about my teeth melting under the searing heat from my tongue, when I realized that “hot in” usually also means “hot out”, giving me something else to look forward to in a few hours time. Turns out that one of the reliable properties of Szechuan peppercorns is their numbing effect which thankfully – I’m delighted to report – lives up to its reputation for the duration of its lifecycle. 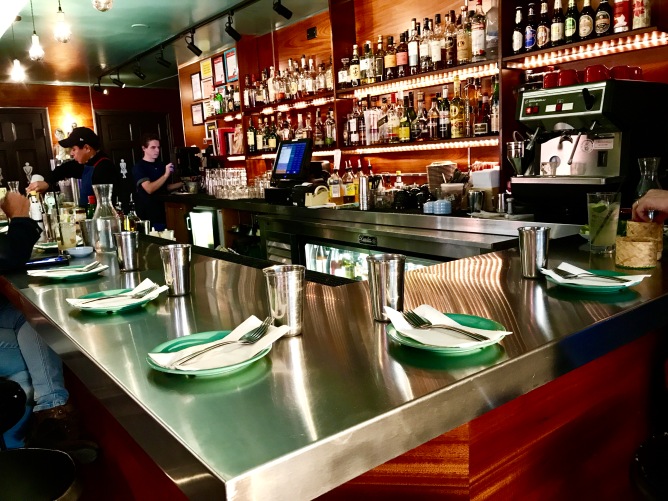 Crossing the Brooklyn Bridge has always been a daunting challenge for New Yorkers ever since its inauguration in 1883. One leaves the calm orderliness of Manhattan’s grid structure behind, only to be faced by backyards, drivers, hipsters and families with children. Quite literally a war zone. Regardless, once you’re through the worst of it and you finally pull up at Pok Pok NY, it somehow seems a bit more “cafeteria” than you expected. I know looks can be deceiving, but the quirky paper-doyly festooned aluminum bar, and the sensibly laminated Hawaiian-print table cloths with unbreakable prison-ware dishes redefines casual – even for me. But when our disarmingly engaging waitress brought a far-too-small bowl of House-roasted Red Peanuts with chilies and lime leaves, my table manners deserted me. Was I breaking a hunger strike or something? Were these the first peanuts I’d ever eaten? Was I always this ambidextrous? It was all a bit of a scrumptious blur that ended far too quickly. 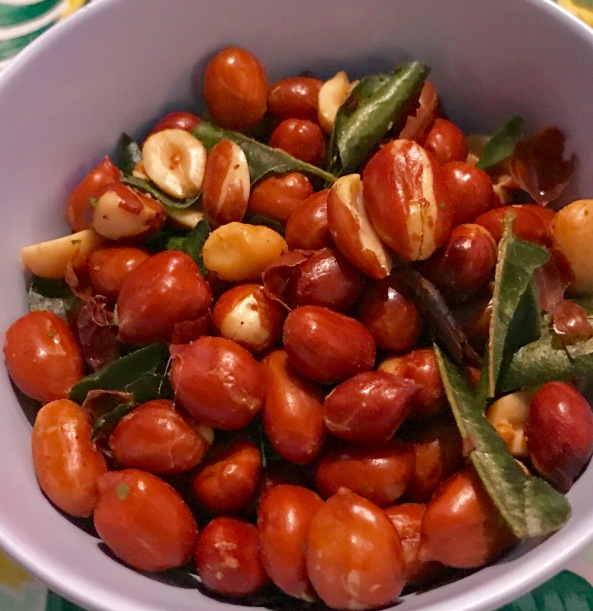 Then things shifted down to a lower gear when the rather unmemorable minced duck and mint salad (Laap Pet Isaan) showed up with a plate of freshly plucked Thai herbs. And my entire dining party unanimous classified the tender chunks of Burmese pork belly curry, (Kaeng Hang Leh) in a nondescript broth as “nothing special”. 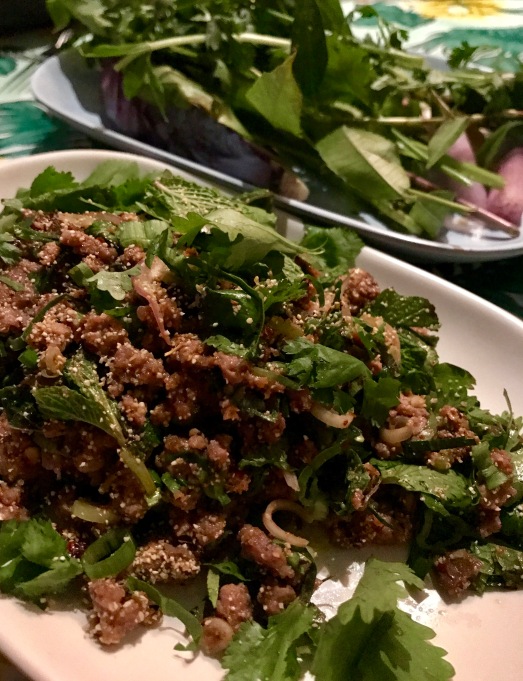 The Kai Yaang Tuua, turned out to be a spectacularly ordinary roast chicken (with both feet attached, and stuffed with an irritatingly thorny lemongrass and garlic stuffing) which were it not for the two dipping sauces, might have been even less popular. 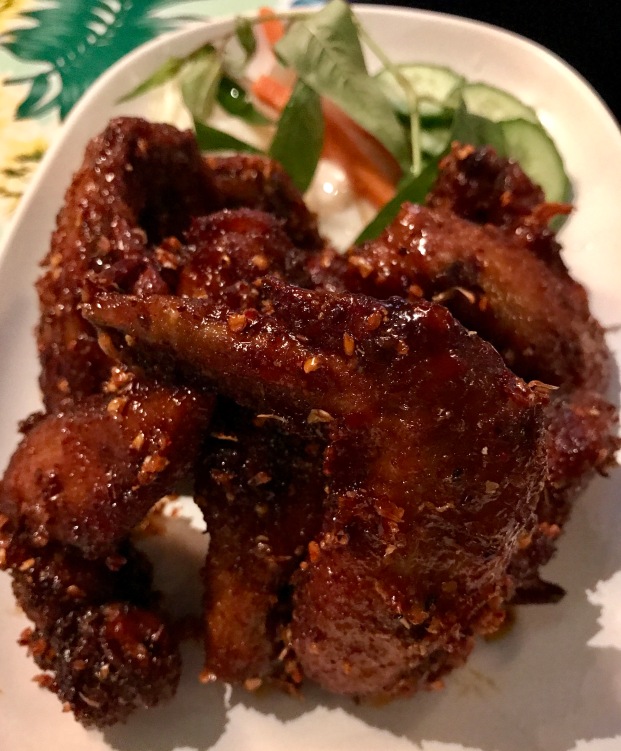 But as expected, Ike’s Vietnamese Wings are still the smash hit that once turned a kitchen into a goldmine. This legendary chorus line of 6 auburn fish-sauce-marinated chicken shoulders, tossed in the most mouthwateringly sugary, smoky, sticky, garlicky, peanutty, peppery caramelized glaze with a subtle heat, came just inches from touching my soul. I’m talking about a finger-licking, mood-altering delight that makes the thought of another risk-to-life-and-limb journey to the far side of the East River entirely repeatable.