All too often when eastern kitchens open up in western countries, a “dilution” occurs, making foreign food more palatable for local palates. And none seem to suffer this translation more so than south east Asian cuisine. But from time to time a courageous team will open an uncompromisingly authentic bistro that will either lure the locals in or frighten them all away. Such is the case with Somtum Der, a replica of one of Bangkok’s most celebrated restaurants – right in the heart of the East Village. The majority of the menu offers genuine Isan (northern Thai) street cart food, which might be lighter on sugar – but way heavier on chilies – than most other Thai joints around town. The no-frills, pine bench-and-board dining room gets its name from the most famous of all Isan dishes – “Somtum” (Papaya Salad), while “Der” means warm invitation (or perhaps more fittingly – we dare you!). 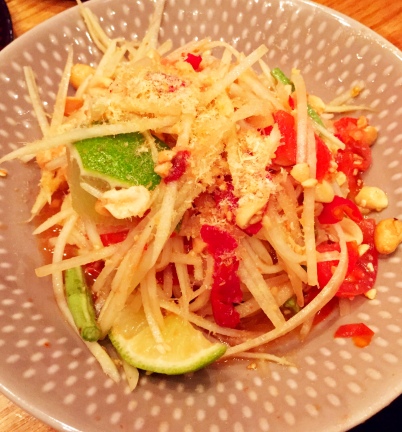 The $13 or less, full-color, photographic menu condenses the ordering process substantially, as what you see is precisely what you get. And what you get arrives in a relentless air raid of plates, baskets and dipping jars. 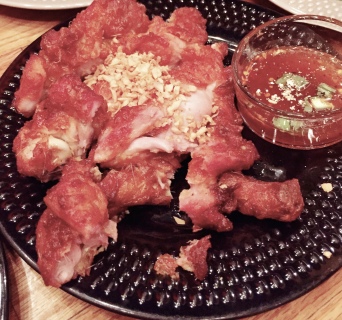 Working clockwise from where I sat, there was the wondrously crunchy Deep-Fried Chicken Thigh with a blond dusting of indulgently fried garlic served with a lime, chili and fish sauce dip.

Right next to it were the most unbelievably moreish strips of Deep-Fried, Sun-Dried Pork with a tangy, salty, vinegary and slightly fruity hot sauce. Also within arm’s reach: a tight carousel of briny, savory, fresh Shrimp Sashimi with a green chili sauce. I don’t think I’ve ever bitten into shrimp so raw that I was concerned it might bite me back!

The sausage-shaped cones of Grilled Sticky Rice were a great way to either neutralize the palate for thirty seconds, or dip and splash into the armada of sauces across the table. The only dish the waiter insisted we try was the Spicy Duck Salad with mint and chilies, which turned out to be a sharp and sweet interlude before the House Special Grilled Marinated Beef.Each finger-long strip was dusted with a coating of warm, crunchy spices that elevated the tender beef to a deeply flavorful and complex umami taste – before being dunked into yet another bracingly sharp fish sauce bath.

As brave as we had been in trying to keep the chili intensity at bay, nothing could extinguish the 5-alarm fire from the signature Spicy Papaya Salad (of which there are 8 varieties, and up to 4 levels of sinus-clearing heat). Within seconds of munching through the sublime textures of julienned fruit, chopped nuts and lime, we were a silent chorus of gaping mouths like beached sea bass, waving uselessly at our teeth – the universally understood sign for “Great Scott and little fishes! I think my tongue is melting!”

Trying to secure a table at one of New York’s “hip/hot/in/now/happening/trendy/it” restaurants once the reviews have been printed, feels like that exercise in futility that leads to insanity – where you perform the same action over and over again expecting a different outcome each time. It doesn’t matter if you call a month in advance, at midnight or noon, using a Scottish accent or pretending to be Steven Spielberg’s assistant. The news is always the same. “We are fully committed,” or “I have nothing between 5:15pm and 10:45pm!” (Did I ask for a blue-plate special or a midnight snack?)

Oddly enough, when all of a sudden the unthinkable happens and you land a prime time four-top on a Saturday night, the only thing larger than your joy is the nagging sensation that the chef must have walked out or the health department found a critter and slapped a big, green “B” on the door – or (more tragically) that everyone has already lost interest in the place and moved on to the next “hip/hot/in/now/happening/trendy/it” spot.    I know. I know. These are real problems.

But this time persistence was on my side and I finally found myself crossing Hudson Street and stepping into Bar Bolonat’s U-shaped dining room with middle-eastern aromas emanating from the kitchen. The décor pulls off a bit of a hodge-podge of every construction medium available, from exposed iron beams and ducting, to wood veneers and bleached face brick, to a row of bay windows to amp up the curb appeal. If Taim and Balaboosta were her warm-up laps, then Bar Bolonat is chef Ainat Admony’s main race. The menu draws from some of her former successes, but judging by the litany of foreign or just plain unpronounceable ingredients, it’s clear that chef Admony has shifted into high gear, and New Yorkers are enthusiastically waving her on to win.

The wine list is approachable and varied with a few organic options as well as a few unfamiliar offerings from the Mediterranean/Middle East – like a Serbian Prokupac, a Moroccan Syrah and a couple of Israeli Cabs and blends. 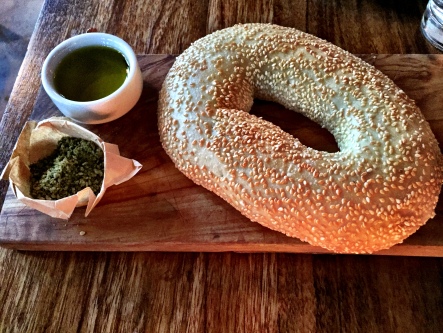 The menu grows in plate size, and comes with the caveat (which should become the unofficial anthem for the tri-state area) that “the food is designed to be sharable and arrives when it’s ready”. First out the door is the obligatory Jerusalem Bagel. It’s a longer, flatter, lighter and fluffier version of a sesame bagel. You tear off a chunk, dip it into the fragrantly grassy olive oil bath, towel it off with a dunk into the za’atar (which is Dukkah on steroids with sumac and herbs) and the taste and texture combination is almost biblical.

It’s tough to resist the Balaboosta Fried Olives that arrive resting on a puddle of labneh (strained yogurt) and harissa oil. They are encased in the thinnest of velvety crumb crusts which give way to the wonderfully salty, green olives stuffed with cheese. 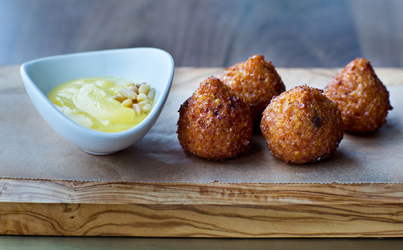 Moving on to some of the medium sized plates, the trio of cone shaped Hudson Street Kibbeh is presented with a pine nut and citrus yogurt dipping sauce. Inside the bulgur wheat crust is a delicious mélange of meat spiced with cloves, cinnamon and all spice, while being sweetened with currants and spiked with pepper. A truly masterful balance of Mediterranean flavors in an auburn teardrop.

Not having ever heard of a Yemenite Curry before, I braced my lips and palate for hell-fire and brimstone, and was rather surprised by its coconut milk modesty given how extroverted its brothers and sisters had been up till now – but we tore through the Wild Mushroom Pasta like soldiers home from the war. Large, floppy ribbons – almost the size of lasagna sheets – snaked around the most delectably umami fricassee of mushrooms, colored and flavored by Persian garlic, charred onions, nigella (onion seed) and a refreshing dollop of labneh here and there.

It might have been my intention to try each of the dessert options on subsequent visits, but once the Fried Baclava Ice Cream swooped in, and I cracked through the crispy envelope of filo pastry allowing the soft ice cream to ooze out and mix with the syrup and nuts on the plate, I realized that for the next 10 years, I’m never going to order anything else.