It’s always endearing to hear someone speak with a foreign accent. Even if the words are right, they somehow take on a more interesting nuance. (How do I know? I speak English without an American twang.) But when a foreigner speaks an even more foreign language than their own, it becomes a whole different lobster meatball. Take Maison Yaki for instance – far more than just a gastropub with an edge, it’s like a pedigreed Frenchman who speaks perfect Japanese. 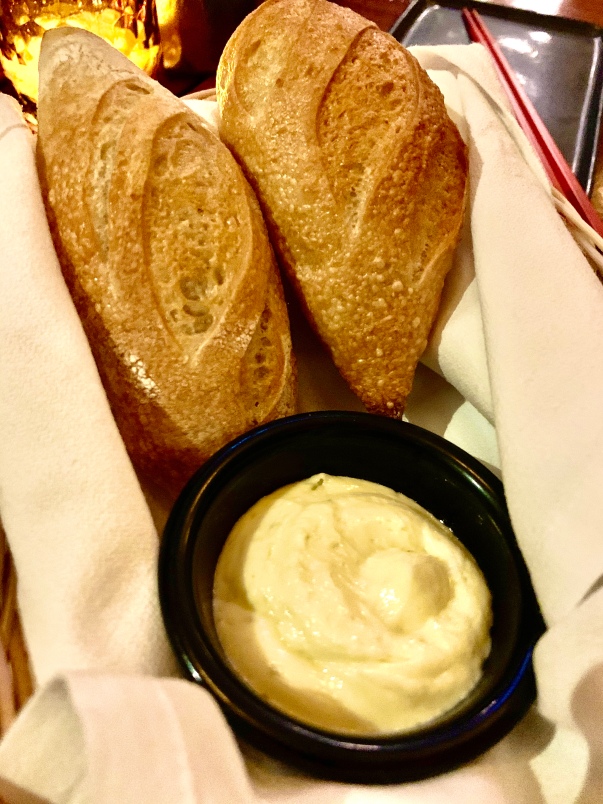 You’ll know what I mean when you bite into a chunk of Parisian baguette smothered with whipped butter infused with yuzu kosho citrus chili, which instantly reminds you that your table is located right in the best of both worlds, as chef Greg Baxtrom marries them together masterfully. His skewers feel, look and taste authentically Yakitori-esque, but they get an elegant upgrade with an assortment of classic old-school French sauces.

The chop-stick-holder menu offers snacks, app’s and skewers, where nothing rises above $9. The service is chop-chop, and the delights emerge as they are cooked. The portions are small, flavorful and utterly delicious, and if you’re not careful you can end up ordering practically everything. (We did!) From scallops to lobster, chicken wings to duck breast, lamb loin to pork belly…all draped in astonishingly complimentary sauces like Dauphine, Maltaise, Américaine, A l’orange, Dijonaise, Herbes de provence and Bordelaise. Incroyable! 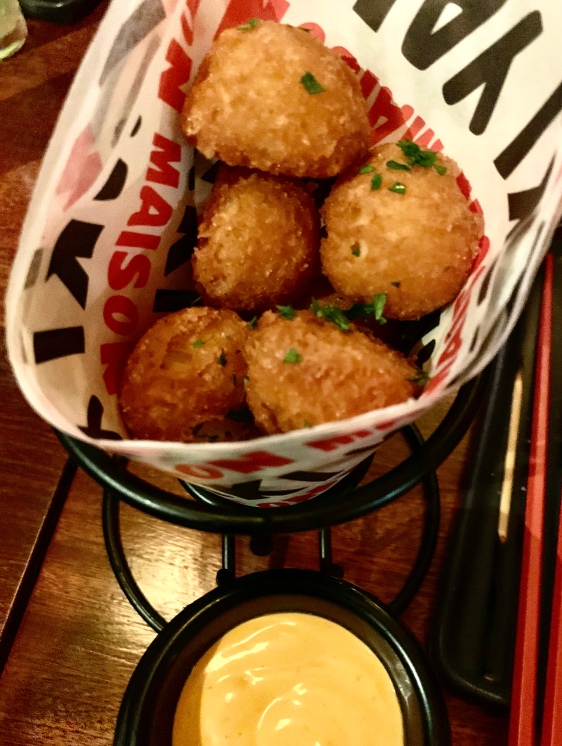 But it does beg certain questions regarding the need for the one or two gratuitous bistro items on the otherwise unique list of bites. (Will Escargot seriously slither onto menus again? Will Frog’s legs leap back into vogue? I doubt it.)

The lively, colorful and compact bar-bistro with a back garden feels more like an homage to the back-alley Yokocho’s in Shibuya, versus a white-aproned-waiter-with-an-attitude bistro on the left bank. Located right across from his sensational breakout success Olmsted, Baxtrom is clearly on a mission to elevate Brooklyn’s Park Slope into the next dining destination in New York. But what might be good for Park Slopers, is tough for Manhattanites. Most of the knowing crowd are walk-in’s, with an area slightly larger than a pack of Gauloises Blondes for reserved tables that are pilfered up to a month in advance. 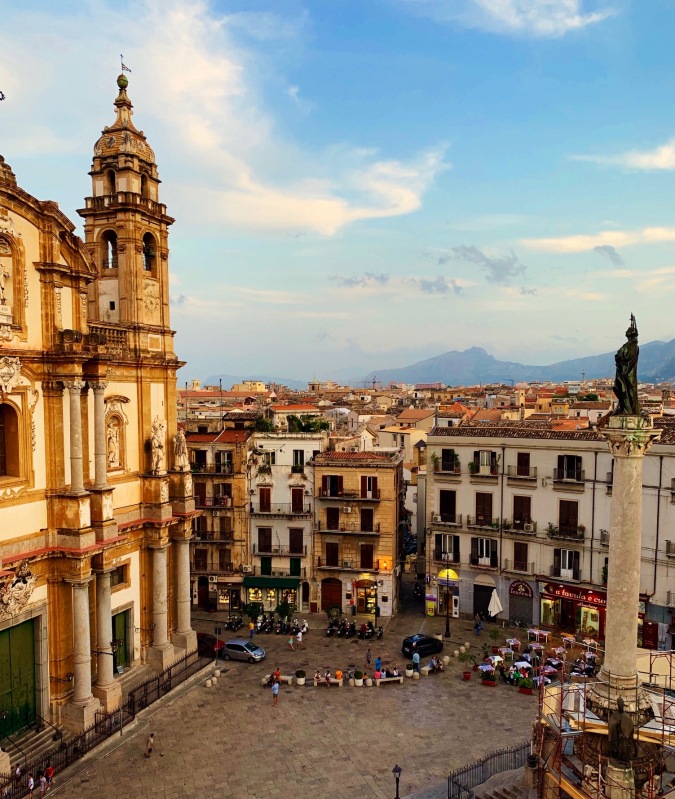 Finding Sicily on a map is as easy as bumping into a tourist with a selfie-stick. It’s the brioche-shaped soccer ball being kicked in the tuchus by the boot of Italy. And to add insult to injury, due to its highly desirable location between Africa and Europe, the largest island in the Mediterranean had to endure an abundance of wars and rulers. But there was an upside: whether it was the Greeks, the Arabs, the Normans or the Romans, as each civilization fled, they left behind an indelible culinary influence which has set Sicily apart from the rest of the world. And even by Sicilian standards, the mecca of eclectic food is concentrated on the streets of Palermo.

Salva, our guide for the evening’s munch march, welcomed us to the “carb civilization”, and then whisked us away from the iPhone-wielding throngs to a web of back-alleys. Our first stop was to sample three popular bruschettas. The fist was topped with a yummy, creamy, dreamy almond and basil pesto. The second – a tart and tangy local olive tapenade. But the third was tough to guess. What looked like dried black forest ham was actually a slither of tuna sausage! (Probably the first time you’ve ever seen those two words together, but long before cattle farming became commonplace in Sicily, the only source of protein was from the sea.) A complex mix of meaty umami with a very faint hint of salty anchovy, brightened by the segment of lemon and shredded mint – Sicily’s undisputed preference over parsley. 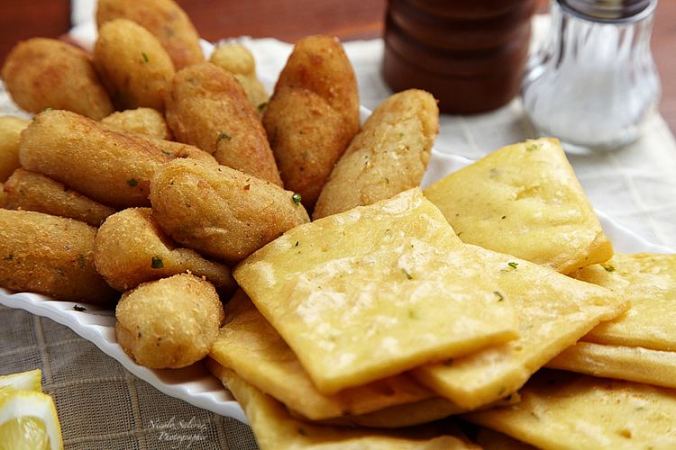 Our next treat was more than just a street-food snack. Panelle (chickpea fritters) reappear as a side dish in countless Sicilian restaurants. The gloriously golden discs of delight (often shaped by the bottom of a square olive oil can) are usually served with a portion of potato crochettas, or a half-n-half mixture of potato and chickpea crochet-ters. The perfect companion to a chilled bottle of Birra Moretti. 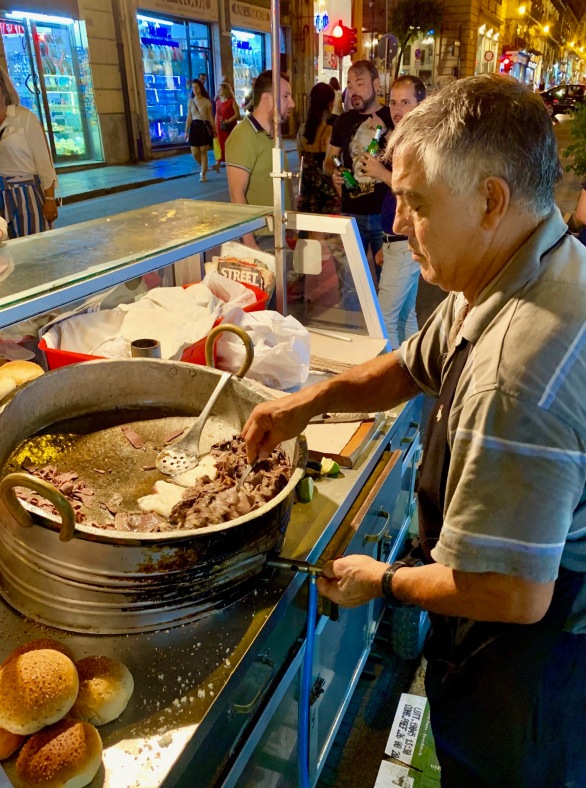 Having been invented on the island, I thought it was merely a matter of minutes before we’d be munching on an array of aranicini. But because the cocker-spaniel-colored rice-balls stuffed with meats and cheeses are as pervasive as espresso bars, we didn’t really need much help finding them. Less abundant (and clearly less tourist-friendly) are the pani câ muesa. But before I translate this, Salva’s family stood watching him on his sixth birthday as he bit into his first pani câ muesa. “It was like a right-of-passage. My Palermitan bar mitzvah!” Then, in a dramatic gesture, he raised his hands and sank to his knees on the cobble-stone streets in praise for whichever of us was brave enough to try the veal spleen and lung sandwich. First boiled and then fried in lard, the thin offal shreds are stuffed into a sesame bun. Even though it looked a little like a lamb gyro sandwich, the spongy, chewy, oily texture devoid of much taste (beyond the lard) hardly warranted a second bite. I believe the word is…”interesting”.

The mozzarella in carozza, however, required no coaxing or convincing at all. Imagine biting into a crisp-battered, deep-fried, soft-bread sandwich stuffed with bechamel-smothered mozzarella and ham? An unparalleled thrill in every smoky, salty, cheesy, molten morsel. (Not sure I can ever look a regular croque monsieur in the slice again.) 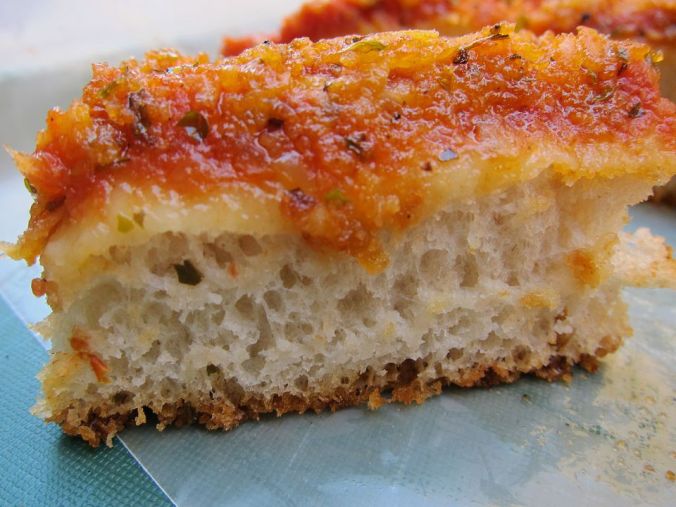 Focaccia (a derivative of the word “fire”) is one of the oldest fire-grilled breads in Italy. Even older than pizza, (in fact, pizza is an evolution of focaccia), the sfincione is a fluffier, spongier version of focaccia topped with a simple sauce of tomato, onion and anchovies. According to Salva, not only does the dough have to sit for 12 hours to oxidize, but like all Italian sauces, the topping has to be prepared the day before as well – which is astonishing given that this absolutely delicious Sicilian Christmas snack can be devoured in under 12 seconds.

If you had anticipated some sort of cannoli to conclude the tour, you’d be in pretty good company, but it is considered a faux pas for Sicilians to eat cannoli’s in the summer. Not only do the sheep have a harder time finding fresh grazing – which yields a very intense ricotta, but the gelato is just too darn good to ignore. Instead, we gorged on what American tourists refer to as a “gelato burger” – a sweet brioche sliced open with two scoops of the creamiest, smoothest, most dangerously addictive gelato ever. Salva’s only rule: we could pick any two flavors – so long as one of them was pistachio!