Trying to get into any of LA’s “it” restaurants at the peak of their game has always involved a bit of high stakes drama. But none can rival the theatrical shenanigans of securing a seat at Jon Shook, Vinny Dotolo and Ludo Lefebvre’s Trois Mec (three mates). Just like any other live performance, the website offers tickets to specific sittings on specific dates. The “pay now – see you in two weeks” scheme permits diners to sample Lefebvre’s unconventional cuisine in a daily changing, omakase (chef’s choice) menu of whatever happens to be in season, in vogue or in the pantry. 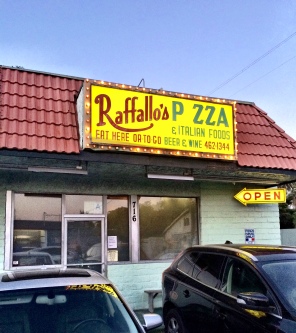 Thrilled to be finally clutching a ticket, I gingerly opened the door to a roar of “Bon soir”, in an utterly unremarkable dining room, that occupies the space of a formerly unremarkable pizza joint at the end of an unremarkable strip mall in the shade of the Hollywood hills.

Then for the next couple of hours I found myself drowning in a tsunami of mediocrity as the giant candle of hype melted away into a puddle of weak tea. Sure, the notion of a don’t ask, don’t tell, hush-hush, say-no-more, pre-pay, chef’s choice supper club sounds rather enticing, but when the eloquently described dishes yield little more than the total sum of their parts, its hard not to feel like you’ve just been taken for a bit of a backstage joyride.

A series of pre-menu Snacks included the house signature Buckwheat Popcorn – a decent enough, salt and vinegary blocker for the gaps in between the teeth; the peppery Tapioca cake with melted Parmesan cheese – a solid runner-up in the rice-cake cook-off; a Dijon Crème Brulee – every bit as unnecessary and pretentious as it sounds; a highly forgettable miniature sesame crisp something-or-other with shredded greens; and finally the first applause-worthy item, a square inch block of fire toasted Garlic Bread with melted herb butter.

The five menu items started with the melancholy death of a Santa Barbara Spot Prawn, which was camouflaged from sight by slithers of crusty tomato, and camouflaged from taste by the violent upstaging of horseradish-infused crème fraiche.

The Grilled Eggplant Caviar reminded me of a bucket of red laundry with Jamon Iberico swimming in a soggy pond of honey melon juice amidst a few crushed hazelnuts in suspension.

The Sunchoke salad, the only real hit among the misses included a medley of the thinnest slithers of delicately pickled sunchokes amongst a splendid blend of crunchy green beans and roasted sunflower seeds over a bed of citrusy hummus, spiked with thyme powder, giving the dish a fresh elegance and a little hope for the rest of the evening’s performance.

The jury is still out as to whether it might have been easier to slice through my wallet or the Grilled Beef Belly, which would have also benefited more from the company of a crispy roast potato than the paltry abalone mushroom and green herb jus.

If I’m ever in the area again, I just might pop next door to Ludo’s Parisian bistro Petite Trois, which by all accounts looks and feels (and hopefully tastes) like a real meal – and may yield slightly more value for the $100 seat!