When I told people I was headed to western Nebraska, first came a chorus of raised eyebrows followed by the deduction that it must be to sample those unbeatably succulent Omaha Steaks. While the nations largest family-owned distributor of the best cuts of farm-raised Nebraska beef all across the US, the medium-rare irony is that none of them get left behind for local enjoyment. No matter where I sat, the grill-striped puck in front of me was either a gnarly maze of uncuttable, unchewable gristle, or a flavorless mush of sawdust.

Instead, the locals get to pick from an abundance of highly processed foods and practically anything fried. One quick glance at a restaurant menu in western Nebraska looks pretty much like the kids’ menu everywhere else. It’s burgers, dogs, fingers and fries from the bluffs to the prairies and back. Although rare to stumble upon a salad, but if you do, it’s bound to be doused in Dorothy Lynch, the all-time favorite apricot-pink French dressing, with tomato soup and sugar as its top two ingredients.

If southern cooking is considered “comfort food”, would it be fair to assume that all one could find out here is “dis-comfort food”? Not entirely. 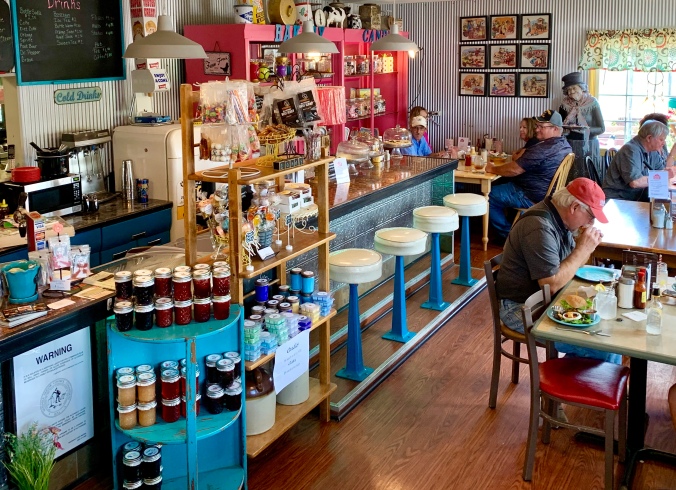 Laura Lee’s Double L Country Café in Harrisburg is a charming road-side diner in an out-of-the-way sort of way, serving fresh, home-made pies to die for, and avocado, jalapeno, whiskey cheddar, blue cheese burgers to die from. But at every whip-stitch, Nebraskans clamor for their beloved Cabbage burger, which is a fistful of minced-meat and shredded cabbage baked deep in the heart of a soft, white bun. 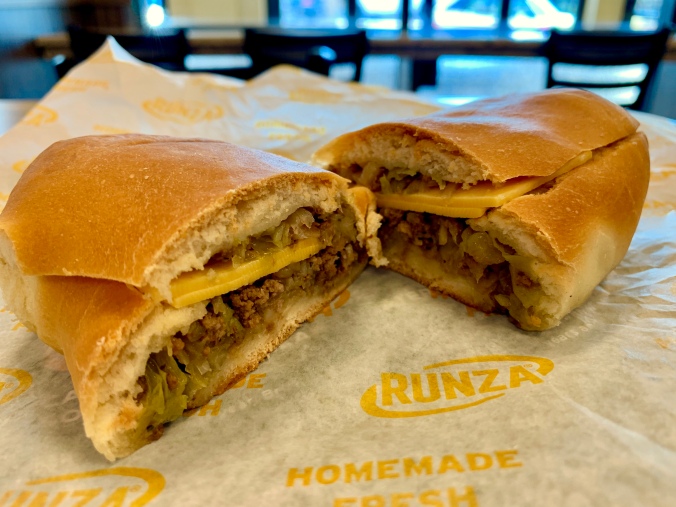 Fast-food chain Runza still churns these out with drive-thru regularity, but were it not for the taste of a dribble of processed cheese, you might as well chow down on a bushel of laundry. 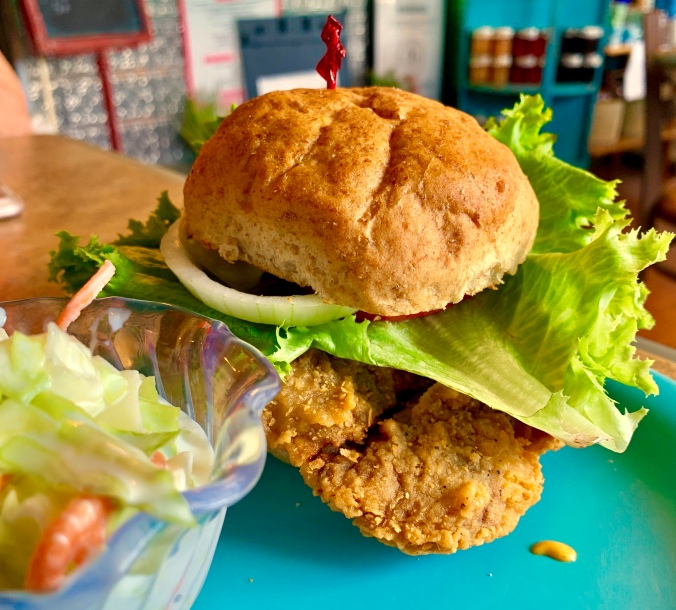 Another Laura Lee favorite (although not exclusive to these parts) is Chicken fried Steak. For those unfamiliar, this is not a steak that was fried by a chicken, but rather a pounded beef schnitzel, which (when I ordered it) was snugly wedged into a sesame bun. Flawlessly crisp, tart and delicious, but also size-appropriate for the hands.

Gering’s Union Bar on the other hand, prefers to push the envelope on human dining abilities. They offer a Diet Burger, which is equally impossible to handle, bite or survive. A tower of 3 patties and a full pound of bacon are somehow stacked between 2 grilled cheese sandwich buns! 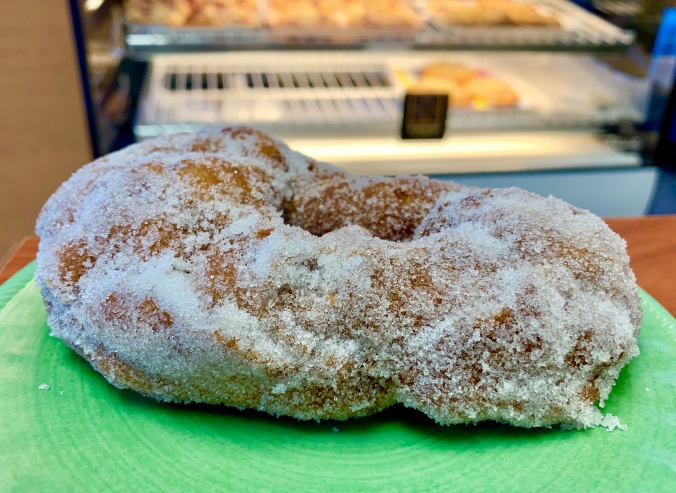 On the sweeter side, it is a safe assumption that no matter where you are, donuts will be donuts. They generally show up glistening under multi-colored frostings or with the occasional jam filling, but are all largely loyal to the formula of fried dough with a hole in the middle. (The hole being a 19th century addition to remedy the often uncooked center). In this part of the world however, local pasty-shops like Gering Bakery seem to have opened a can of worms  with a litany of oddly delectable interpretations and variations. 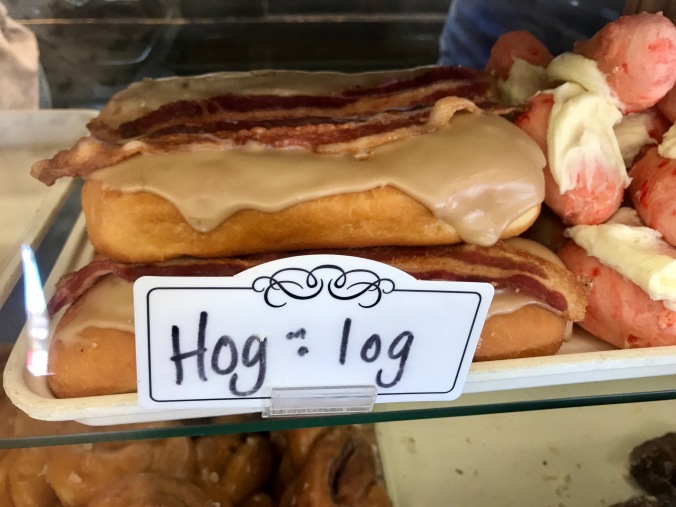 There’s the Long John (stretched-out sausage-shaped with crème fillings), the Hog on a Log (a Long John covered with maple glaze and a strip of bacon), the Bear Claw (baseball-mitt-shaped and stuffed with cinnamon), the Apple Fritter (bits of grated apple baked in with the dough), the Grebel (if a beignet and a donut were to have a baby and bury it in crystallized sugar) and the list goes on.

It’s relatively easy to find the things you’d expect to be deep-fried as well as the one’s you don’t: (Snickers, Twinkies, Ho-Ho’s, Ding-dongs), but Nebraskans also keep their oil hot for ground Beef Tacos, which go down astoundingly well with pepper sauce and root beer at Taco de Oro in Scottsbluff. 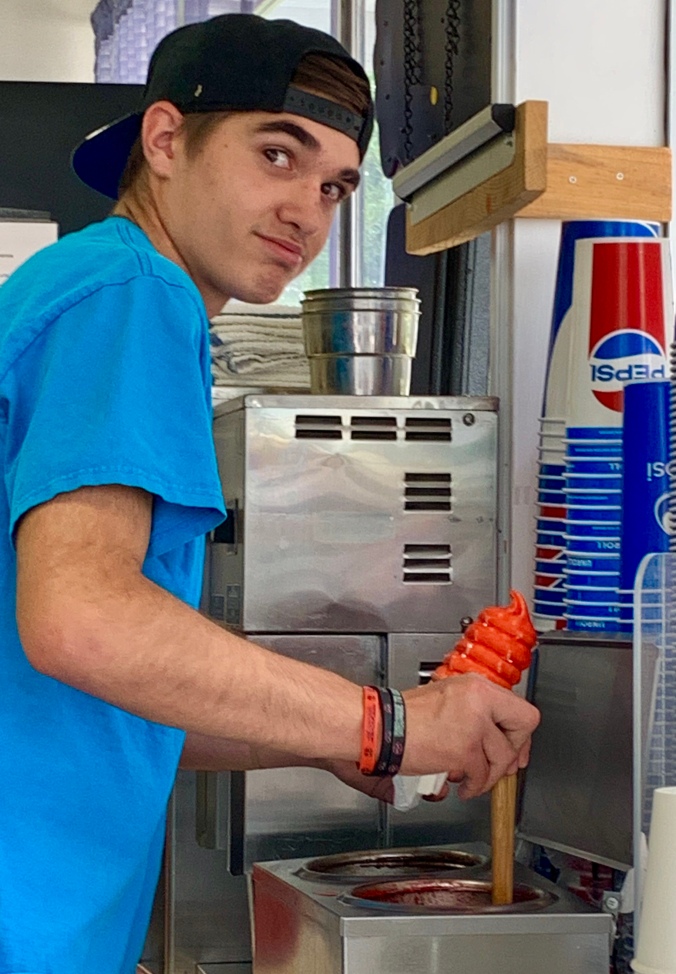 Another popular sugar-rush comes from a Cherry-dipped Cone – a hard-shelled, soft-served ice-cream from Dairy King. It emerges from the molten goo, gleaming like a new Ferrari, but getting beyond the hairspray and nail-polish aftertaste probably takes a lifetime.

Back in the day, farmers would physically “work” the land and eat fresh, seasonal, locally grown and hand-raised produce. But thanks to automation, fast-food chains, feed lots, corn-syrup, big food consortiums and unpronounceable preservatives, eating has become the most affordable Olympic games of recreational activities in the mid-west. Not surprisingly the outcome has led to endless fleets of motorized wheelchairs straining under their cargo of the most extraordinary calorie collections imaginable.

And so, after noticing the rather curious state tourism slogan that actually reads: “Nebraska. Honestly, it isn’t for everyone!” I couldn’t help considering the appendage: “…and neither is the food.”

One thought on “What (not) to eat in Nebraska”