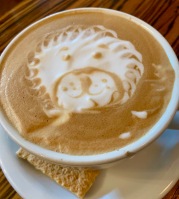 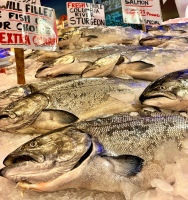 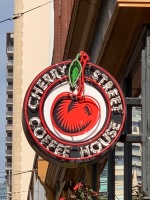 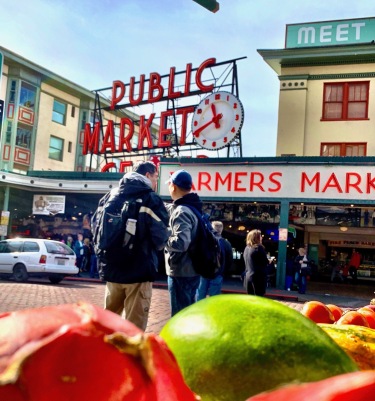 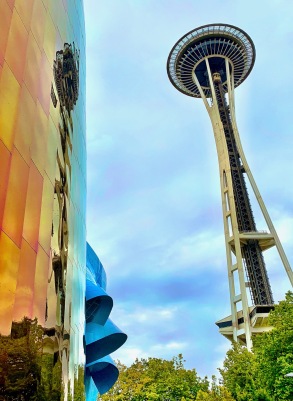 The interesting thing about food in Seattle is that a random amble through the historic Pike Street public market might give you the impression that you can eat just about anything in Seattle so long as it’s salmon, whereas the “emerald city” is actually delightfully diverse and remarkably authentic. Other than the bewildering abundance of coffee bars – each promising a unique blend, a deep roast and a meticulously slow brew, there really isn’t a dish that is typically Seattlish at all. Instead, the rain-soaked metropolis on Puget Sound seems to evoke originality and individuality from chefs who might never risk as much in a more competitive market. Laotian, Vietnamese, East African, Malaysian, Bhutanese, Italian, French and schools of sushi bars make it tough to pigeonhole the local cuisine. 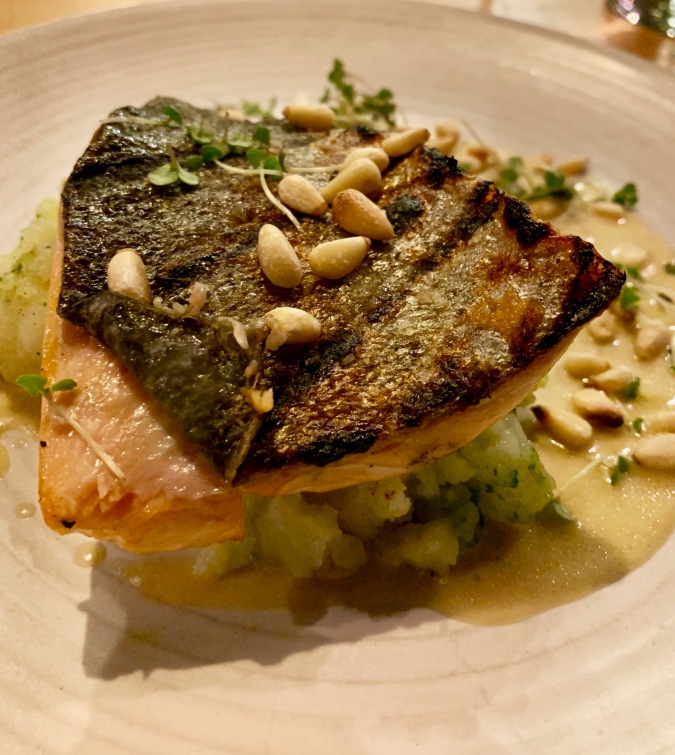 Chef Bruce Naftaly opened the Franco-Mediterranean inspired Marmite (pronounced Mar-meet) after 27 years of slinging pots and pans with his wife Sara at the beloved Le Gourmond. Set inside an old auto chop-shop, the rugged red brick-walled room with 30-foot ceilings and the oddly ornate Spirit within the Bottle bar at the edge of a cluster of wooden 4-tops, the space feels more like an invitation into the Naftaly home, rather than their business. Customers are treated like guests, and the experience is immensely personal. Everything is made from scratch, right in front of you. No shortcuts. No smoke. No mirrors. No fussy plating. No mysterious hail-Mary’s brought in from some “other” kitchen. 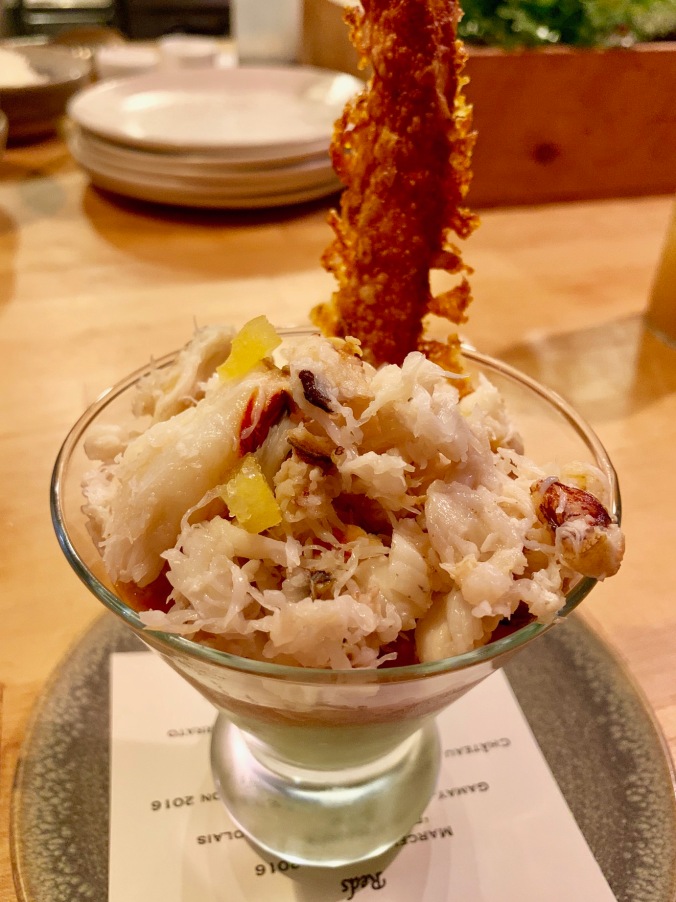 The small to large, 15-dish menu includes an astoundingly zingy Dungeness Crab Cocktail over a face-cream-smooth avocado mousse spiked with horseradish and the cheddar-iest bread stick ever. It was a tough choice between the sumptuous Shiitake mushrooms stuffed with braised tongue and bacon crumbs over a water cress salad, or the clams and nori stuffed Squash Blossom tempura – both smothered in melted cheese. 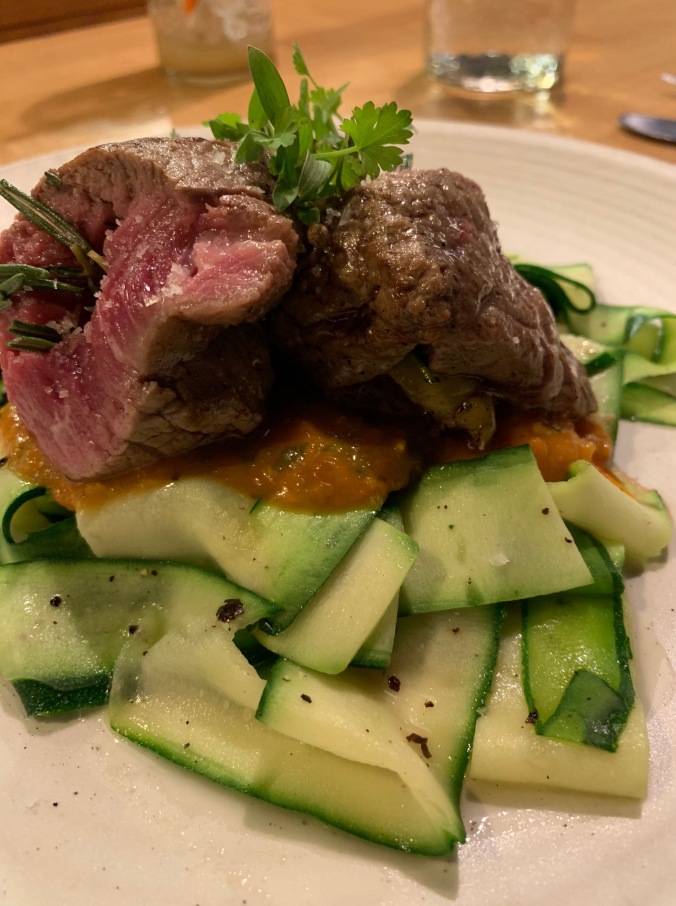 I almost bit off one of my fingers that got in the way of the wondrously flavor-forward Boeuf Paupiette – a super-tender butterflied filet stuffed with briny olives, fresh herbs and roasted garlic, seared for a minute and then finished in the oven, before being set against a tangle of sautéed zucchini ribbons. 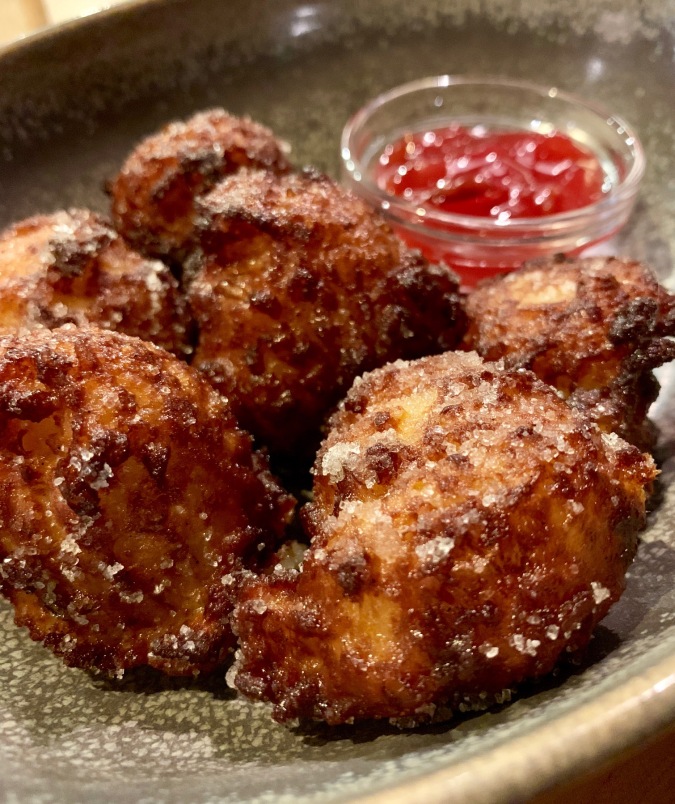 Despite repeated protests, arms were finally twisted to sample a bowlful of the yummiest, crunchiest, steaming-hot Rice-pudding beignets with home-made preserves. 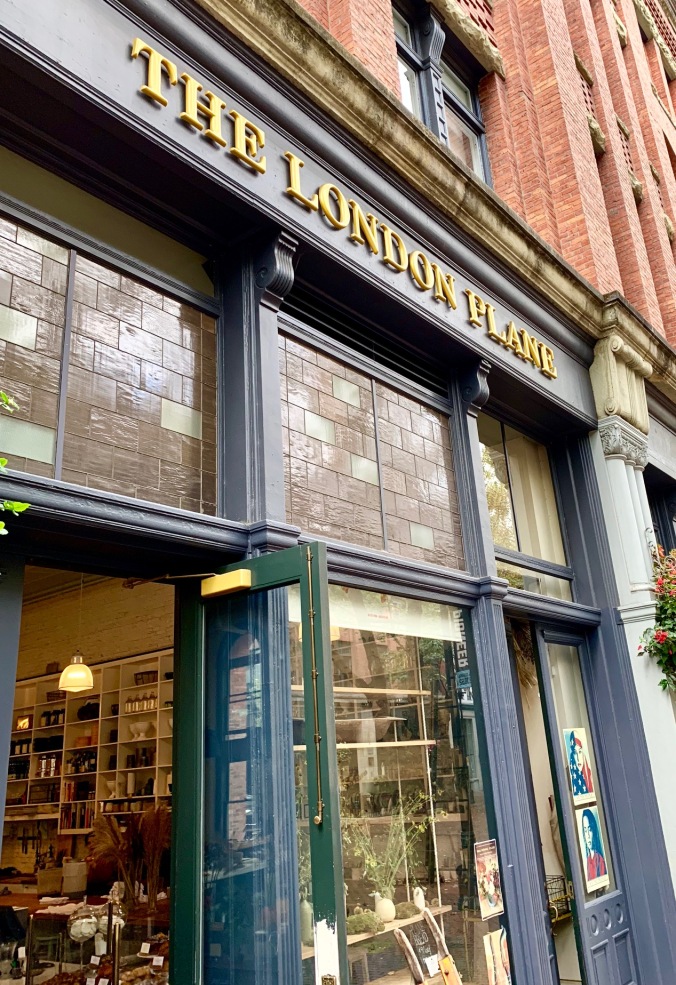 The London Plane has to be one of Seattle’s coolest brunch spots. Overlooking the historic Pioneer Square with its ivy-covered brick and stone walls, Matt Dillon has hopped onto the eat-drink-read-browse-shop train. For some chefs, the battle with this concept is how to prevent the trinkets, flowers and books from overshadowing the main event, but Dillon manages this masterfully with shelves of bespoke groceries, a stellar patisserie with breads, nut meringues, cookies and the flakiest Cultured Butter Croissant in the country. 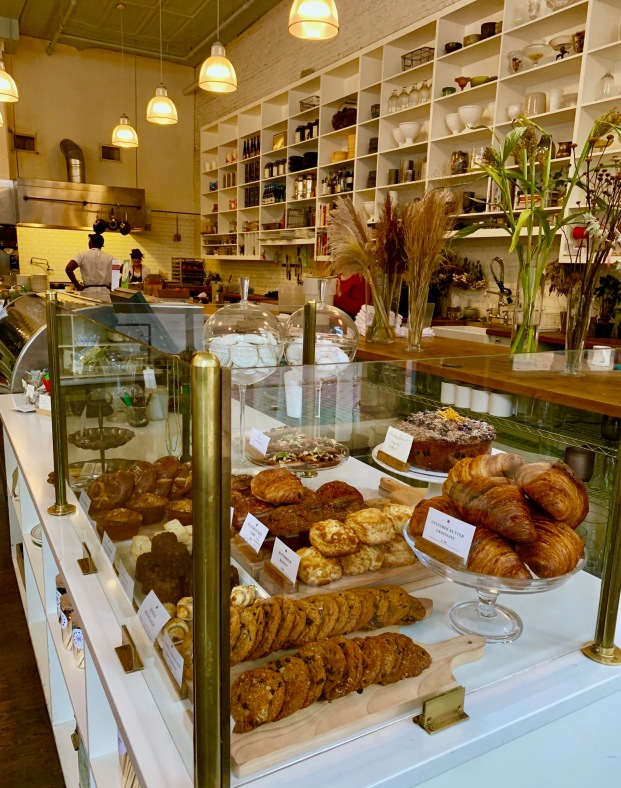 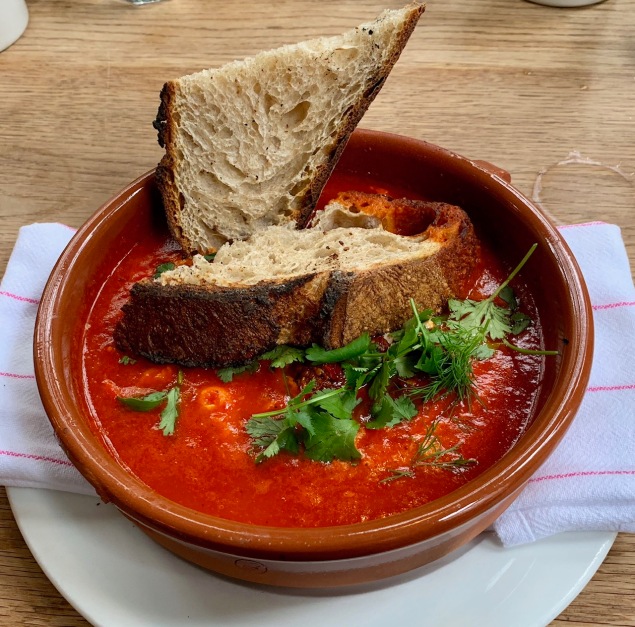 There are many rules about what constitutes a real Japanese Kaiseki dinner. It’s an elegant but rather rigorous structure that starts with absolute punctuality, as the meal cannot begin until the entire “sitting” is sitting! The 7 or 8 (or sometimes more) courses are presented without substitution or preference. There is usually a starter, an appetizer, a soup and a sushi followed by braised, grilled and rice dishes and then ultimately a dessert. 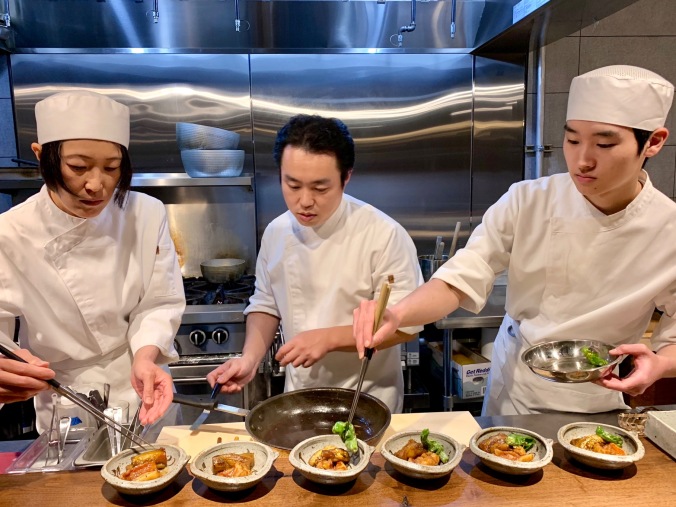 In Seattle’s Belltown, Wa’z chef Hiro Tawara and his conscientious crew of 3 perform double-duty not just as fastidious toques, but also as entertainers. Imagine having 9 pairs of eyes glaring at your every stir, shake, swish, splash, ting, tang, tong and sprinkle? I could never work under those conditions, but this trio delivered persnickety perfection in magnificent dish after magnificent dish, where a bowl would be rotated just a couple of degrees before being presented – just so that the most agreeable part of the floral decoration would be encountered first. 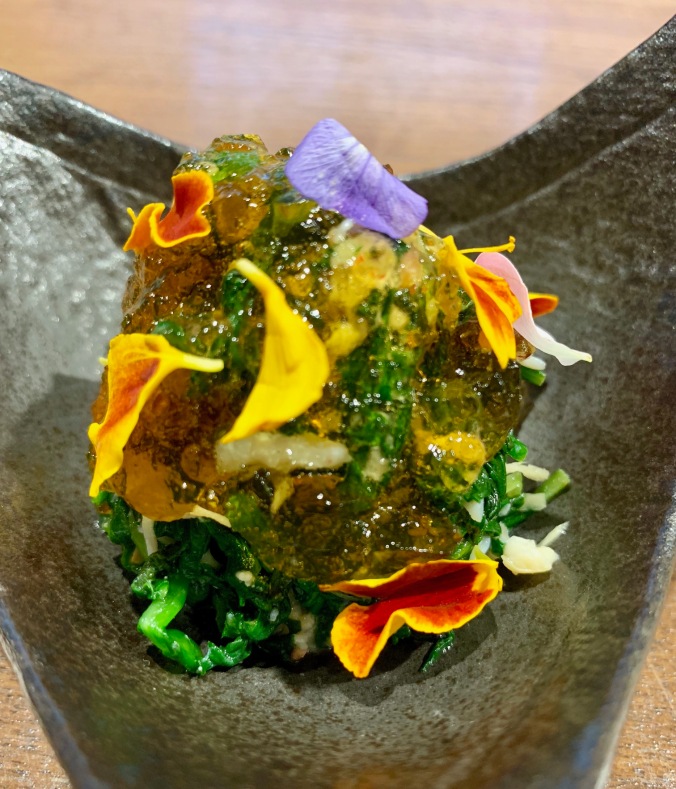 Some of the standout dishes included the Bay scallop Tempura which literally burst open upon contact to release a marvelous ocean spray; a couple of heavenly slithers of A5 (the highest grade) Wagyu Miyahaki beef sushi blow-torched and soaked in ponzu sauce with garlic chips that literally melted away; a robust and creamy Grilled Black Cod with butter-sauteed mushrooms, mirin wine and geoduck, and an astoundingly refreshing Pear Mousse with buckwheat tea ice-cream and fresh grapes and figs. 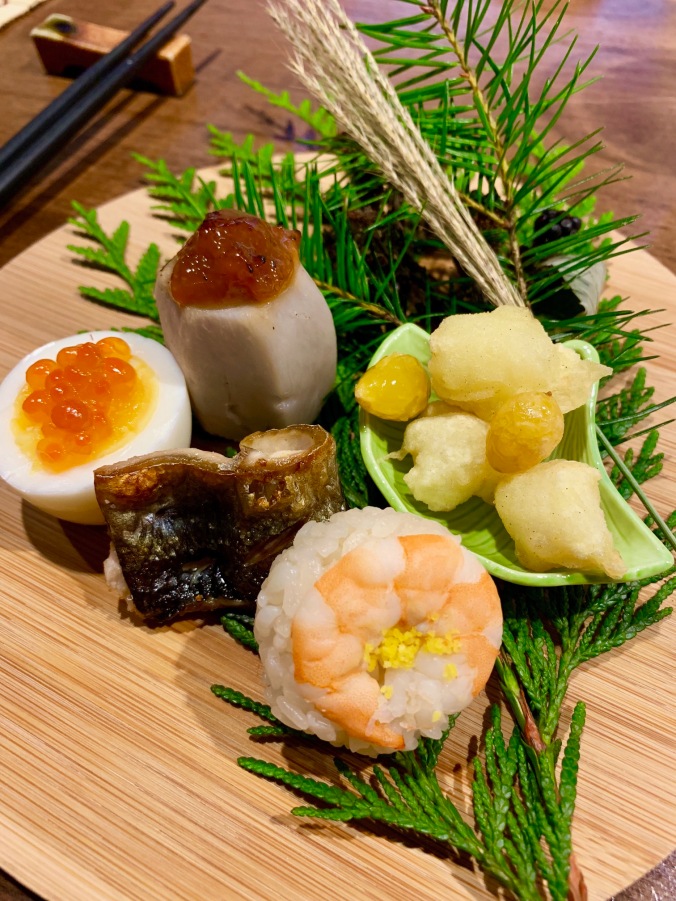 After repeated bowing and smiling, all 9 diners left the very sleek, feng-shui-appropriate and rather colorless room, but then without realizing we could still see them from the street, the crew threw off their aprons and high-fived one another in relief and celebration in an unusual glimmer of human imperfection in an otherwise perfect world. 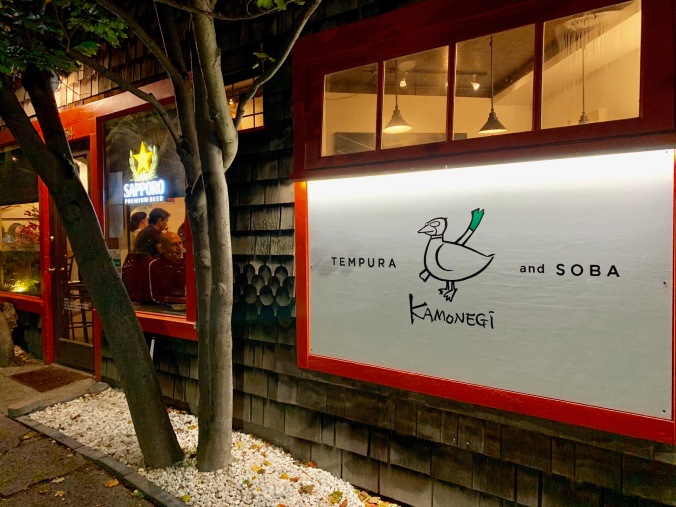 Just across the water in Fremont, chef Mutsuko Soma is churning out the freshest Soba noodles at Kamonegi. So fresh in fact, that I had to stop myself from reaching out and grabbing a few strands as they were rolled, shaped and cut individually from a big ball of buckwheat dough. 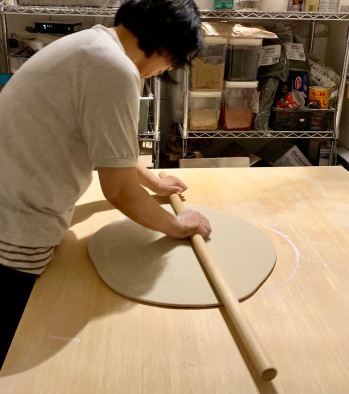 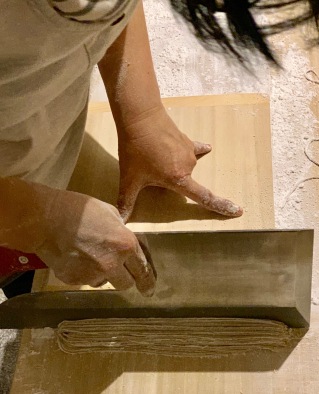 But first we did some damage to the outrageously magnificent tempura. Light, crispy, delicate and without a trace of oil. The diagonally sliced Japanese eggplants with mushrooms and shredded purple radish bathed in the most slurpily salty and wonderful dashi broth. 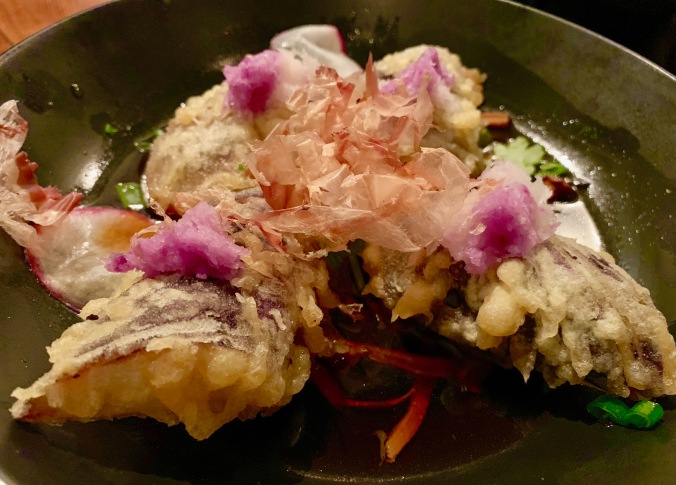 We also sampled the sublime Shrimp and the salty ocean explosion from the Uni Shiso Bomb – which is a single tempura leaf topped with a few coils of raw sea urchin. 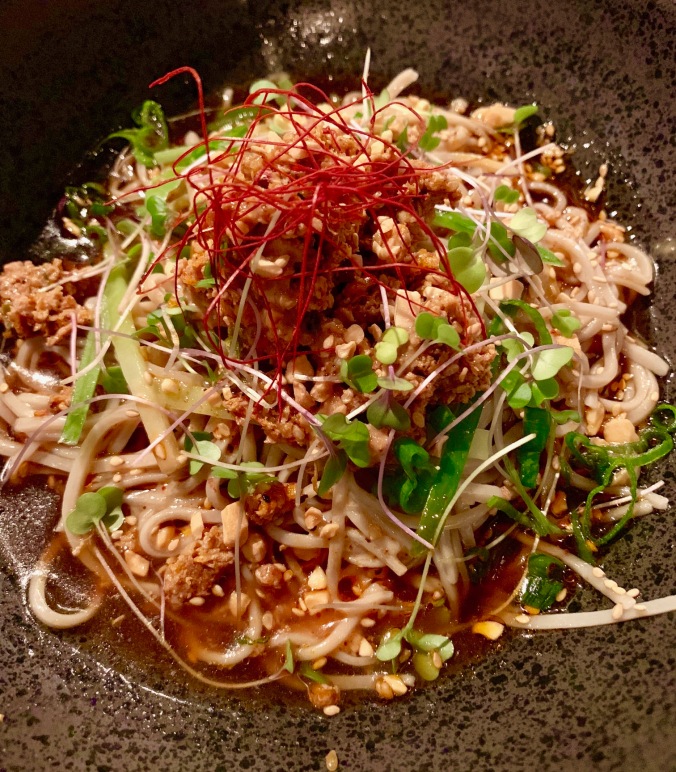 Soba dishes can be enjoyed cold with a dipping sauce (seiro), or in a hot broth (nanbun). We opted for the hot version of their signature Kamonegi with duck breast, duck meatballs and leaks, and the Impossible tan tan as a cold salad with sesame, chili oil and crushed peanuts. Both unspeakably wonderful. 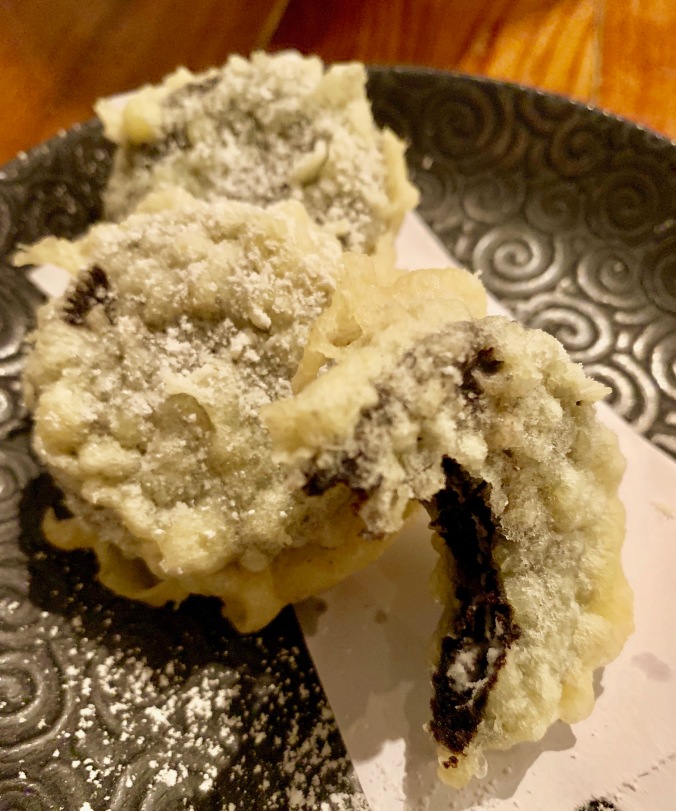 And just to prove that tempura makes the world a better place, in a rare nod to his new American roots, chef Soma throws a couple of Oreo cookies into the batter for dessert. 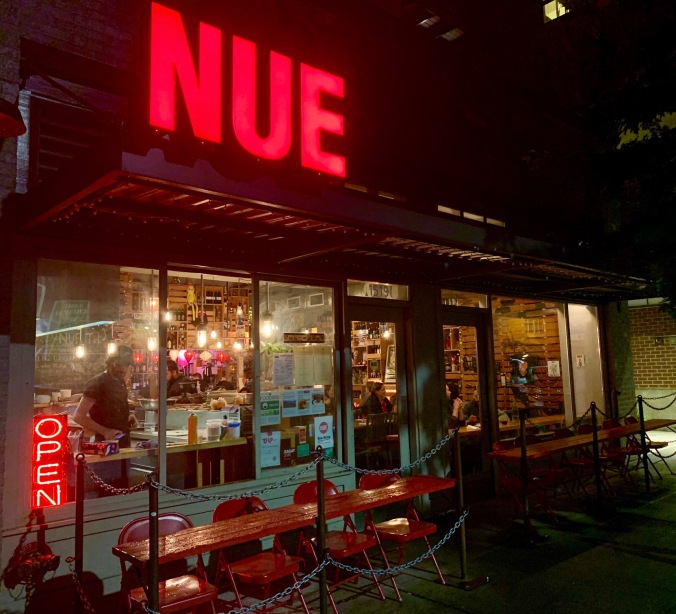 Unlearn everything you ever knew about restaurants and chefs before you head into Nue – a little wooden box crammed with communal tables and quirky roadside bric-a-brac on Capital Hill. Chris Cvetkovich, the founder/restaurateur found his way into the food business as a 3D animator who travelled the globe, and then decided to open a bistro that recreated the best street food he ate along the way. And I’m so glad he did. 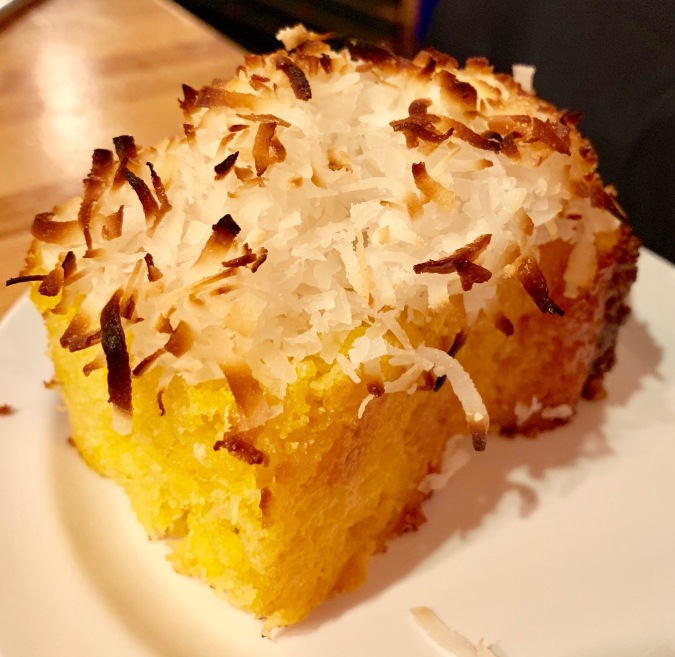 The gob-smackingly delicious menu spans the planet from the familiar to the peculiar to the outright bizarre. Things start off simply enough with a slice of south-sea-island-inspired Pineapple Cornbread, topped with a heavenly dome of toasted coconut that spills all over your lap as you wolf it down like cake. The Syrian Kale & Carrot Salad has a tangy citrus pomegranate dressing with bits of dates for sweetness, fetta for saltiness and toasted almonds for crunch. 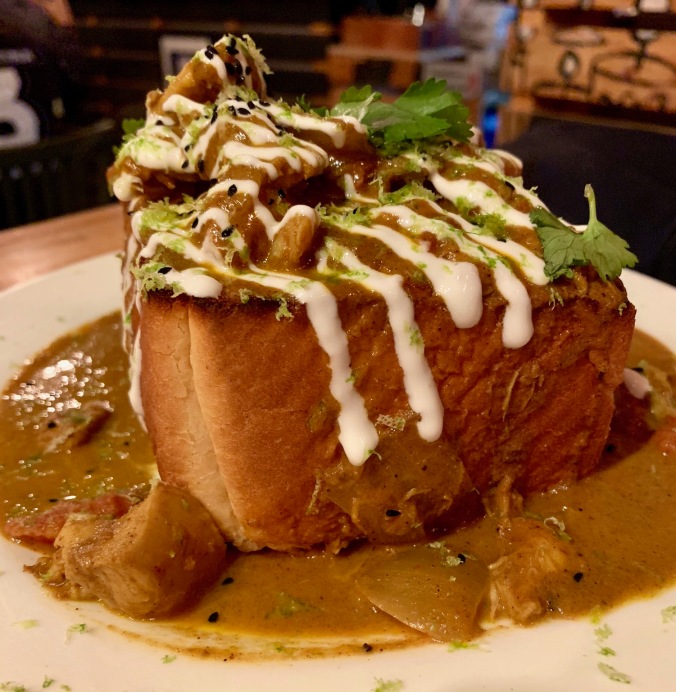 Being from South Africa, I had to order a plate of the nostalgically authentic and utterly amazing Bunny Chow, (which like several other South African dishes like Monkey-gland steak, has zero connection to the animal implied in the name) with a chicken curry masala poured inside a quarter-loaf of Pullman bread. 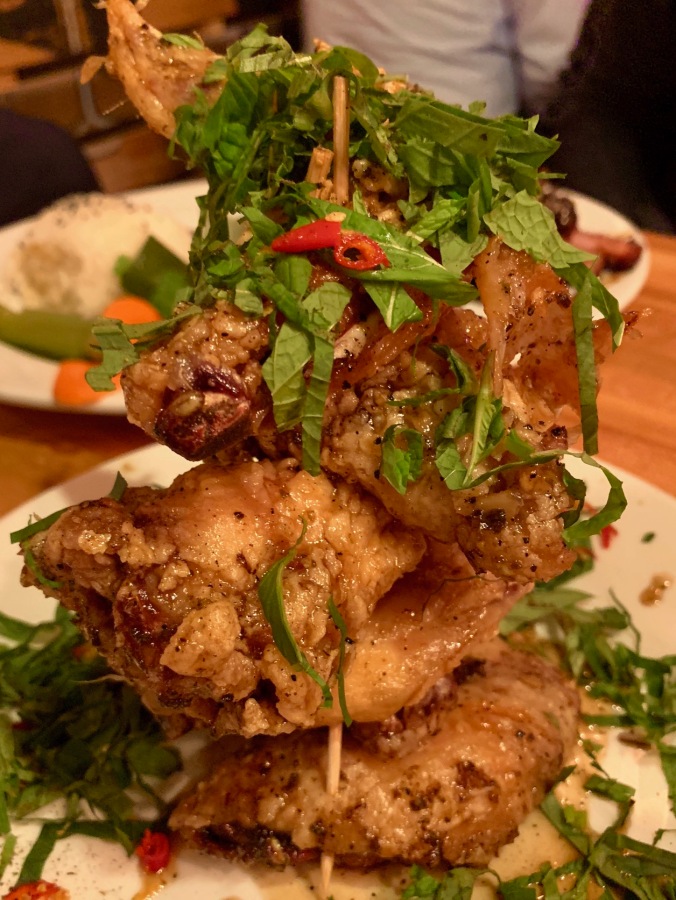 The vertical stack of dry Chengdu Spicy Jumbo Chicken Wings wasn’t nearly as blistering as I’d expected. With the fish sauce, lime, chili, basil and mint flavoring, these tasted much more Thai than Szechuan, but who the heck cares when they’re that moreish? 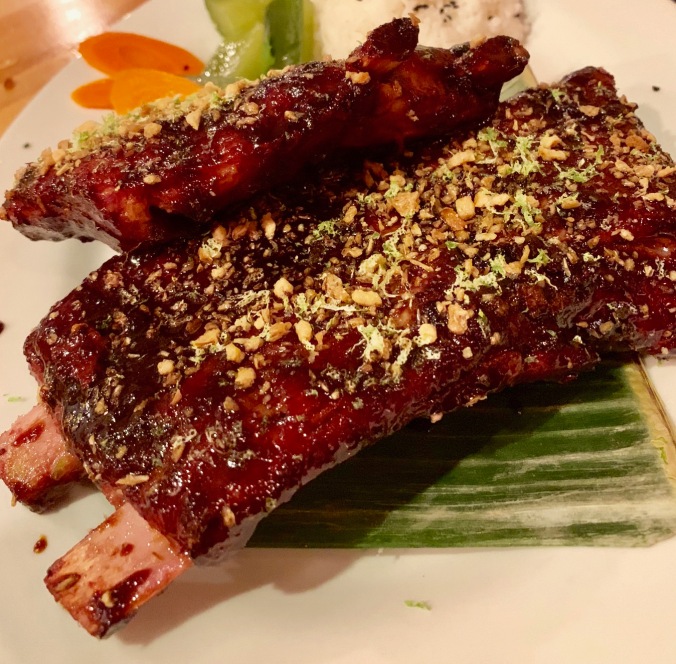 And finally, the delectable flavor of the Balinese Barbecued Spare Ribs is like a song I just cannot get out of my head. Marinated in an Indonesian mix of garlic, lemongrass and chilies, this rack of phenominal fall-of-the-bone smoked pork is cooked sous-vide and then lathered and slathered in a yummy Kecap Manis glaze while grilling. (If you’re wondering what classified as “bizarre”, we took a rain check on the Pigtails, Water Beetles and Fertilized Duck Eggs.)

So, while some people might be sleepless in Seattle – they definitely won’t be hungry. 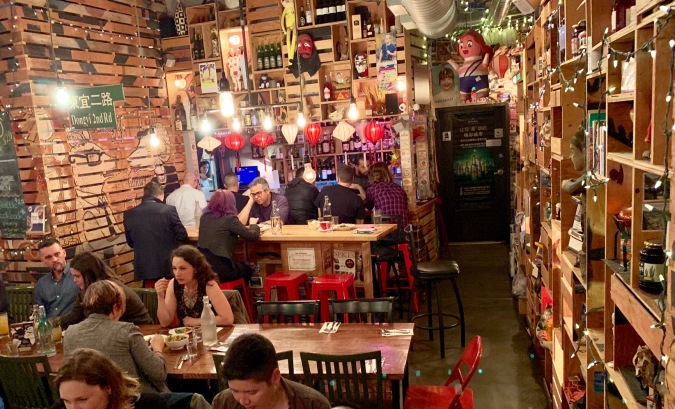