Would you be bothered if people watched you eat? I don’t mind if people see me do a great many harmless things, but for some reason chewing for a crowd feels a little unnerving. Well, that’s the way it is at Mu Ramen, the 20 (highly coveted) seat room in Queens, where homesick Japanese ex-pats and lovers of ramen from all across the 5 boroughs perch themselves for hours on benches surrounding the brick walls, staring and glaring at the lucky few who have graduated to back-less stools at the single communal table. Every one of my attempts (both failed and successful) at coiling a thick noodle neatly into my wooden spoon, every use of my chopsticks (both adept and disastrous) and every time a nugget of smoky ground pork escaped my grip and splashed back into the deliciously dark and sublime broth, I could feel the daggers, sniggers and snorts from the audience behind me: “Novice.” “Space waster.” “Unworthy.” “Manhattanite.”

The only thing that shifted my focus from the crowd to the food – was the food. New York native Joshua Smookler who did kitchen stints at Per Se and Buddakan before opening this mega-popular ATM in Long Island City, boils bones and other carefully selected animal parts for hours and hours yielding 4 of the most delectable ramen broths in the western hemisphere. But more about them later. His 9-item menu is super simple and to the point with Treats (appetizers), Ramen (the reason we crossed the East River) and Toppings (to take the Ramen up a notch or two), but if you flip it over, you find yourself time-traveled back to Queens with three steak options, a pasta and the Harlan hamburger. Who orders a hamburger in a Ramen shop? We did. It’s a medium-rare hockey puck of chopped short rib, smothered in a super-jammy onion relish with a nest of shoestring fries and a square of melted cheese under a sesame bun. Certainly does the job – but by no means the main event.

We started with something called U & I. It’s a combination of sushi rice, nori flakes, spicy tuna chunks and 3 slithers of Japanese sea urchin with salmon roe and a dollop of wasabi. It looks like a Sunomomo bowl, but the trick is to try and get a smidge of each ingredient onto the same chopstick without mixing them in order to fully appreciate the salty crash of the ocean – meets a jellyfish sting of spicy heat – meets a creaminess that folds everything into total sublimity. Next, we climbed into a bowl of charred and smoky, citrusy, salty yuzu-lemon Edamame. After finishing my “fair” share, I began to suck the remaining grains of lemony salt from the empty shells. This is most likely the moment I forgot I was being watched. 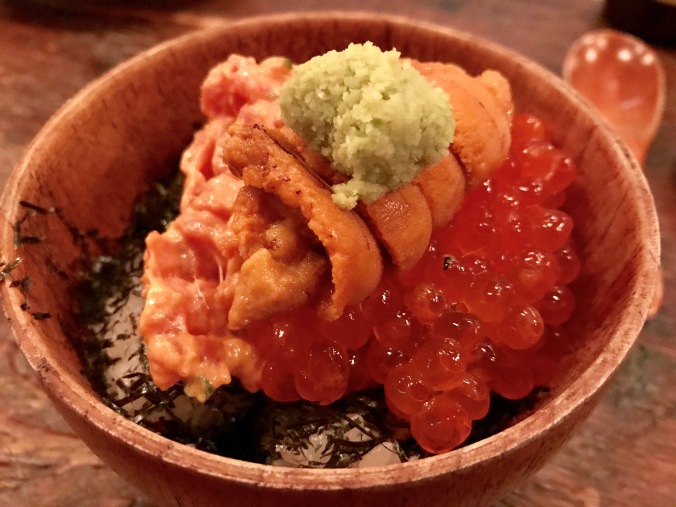 Tebasaki Gyoza was our third “Treat” and perhaps the only real miss. When I lifted one of the scalding chicken drumettes, I became aware of two things: they are heavier than your regular breaded, deep-fried wing and they are also miraculously oil-free. The drumette bone has been replaced with a large nugget of brioche and foie gras, but as fetching as it might look – all bronzed, puffed up and seemingly crunchy, the rather gummy breading hid whatever flavor might have come from the rather mushy, fleshy stuffing. If I had a wish, it would be for chef Smookler to come up with another crowd-stopper like U & I while leaving the brioche and foie gras poultry stuffing to Daniel Humm at The Nomad. We tried 2 of the 4 ramen options. The Mu Ramen (a beef broth from oxtail and bone marrow) was unfortunately not available. We also skipped the I’ll Shoyu duck-based broth in favor of the two pork versions. Tonkotsu Ramen (the most frequently ordered item by my shoulder-to-shoulder neighbors) is a delightfully creamy broth with thin noodles, pork morsels, egg and vegetables. Not overly salty, very lean and wonderfully silky. They could have just as easily served it as tea.

On the steamier end, the Spicy Miso ramen features a clear, dark, rich and wonderfully umami broth with scallion, strips of corn, ground pork clusters, thick noodles, sesame and a tinge of heat thanks to the chili oil. Once the solids were gone, I lapped up the remaining liquid like a good little Hello Kitty. Speaking of Tokyo, most of their Ramen broths tend to be more fish-forward, but either of these outstanding contenders can certainly hold their own next to any of those I sampled in the corridors beneath the Maronouchi station. 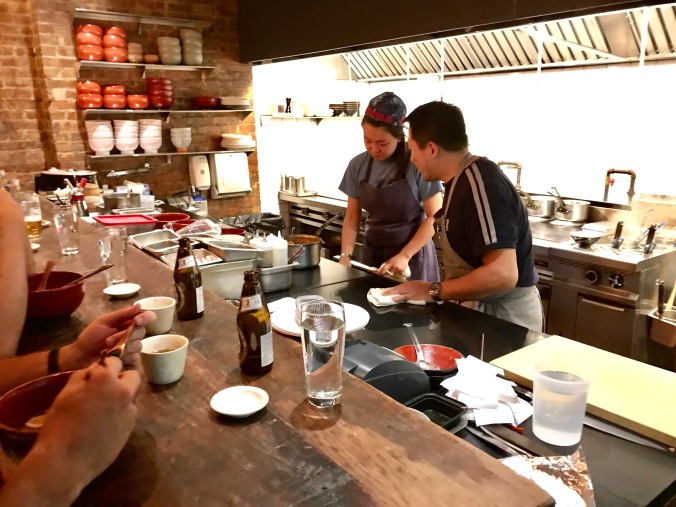 As I rose from my seat, I could feel the spectator glares behind me turn into eager and appreciative smiles. While maneuvering my way out between their knees and umbrellas, I couldn’t help wondering if it would be too much to ask for a round of light applause for my performance. 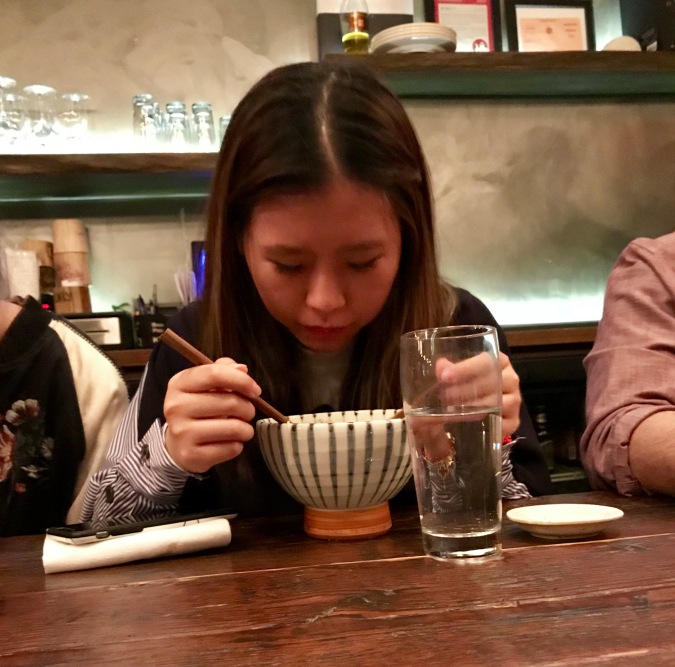