There is really only one thing more impossibly difficult than opening a restaurant in New York city – and that’s keeping it open. Fickle diners, persnickety critics, fierce competition and a winter built for arctic penguins are likely to force even the finest kitchens to tap out. And so despite the incomparable odds, Chef Matt Lambert, a talented, small town kid from New Zealand, armed with his new wife, a unique vision and a little help from Kickstarter, opened The Musket Room in 2013. Fast forward 4 short months later, and the kid goes on to win his first Michelin star. This is one of those stories that warms the belly like hot rum and coffee. So can we please hear it for the (down) under dog?

You might not realize it, but Chef Lambert has probably cooked for you already, having spent his first years in the city behind the stove at Public, Double Crown and Saxon + Parole, but his unique signature is evident just about everywhere in his lime-washed brick, Nolita bistro with its own herb garden on the side. The menu offers a half-dozen apps, mains and desserts as well as 2 chef’s tasting menus, which according to his wife Barbara, “…is where he really has fun!”

But this is by no means fun food. In fact, at first glimpse the presentation might even appear a tad too fiddled with, however even though each winter blossom, micro green or baby nasturtium leaf seems perfectly balanced by tiny tweezers, the flavors, colors and textures are nothing short of monumental.

The trio of St. Simone Oysters bathing in just the right amount of a smoky vinaigrette and sweet-and-sour grapefruit foam would be thrilled to know that their final moments were immortalized with so much drama, as they each rest with their very own flower on a bed of river pebbles, while the last few wisps of dry ice smoke envelope their immediate air space. In fact many of Lambert’s dishes can be described as built around the most adorable little botanical tableaus. 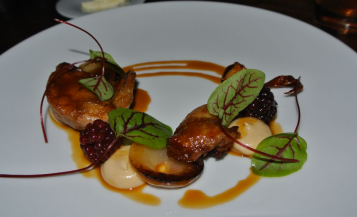 The tender roasted Quail breast and thigh (with tiny claw still attached) lay beside a small thicket of blackberries and leaves with roasted half-onions and a sublimely velvety bread sauce, while the beautifully decorated, house-smoked Ora King Salmon with oils, herbs and seeds is a field day for Instagramers.

Every chef has their particular form that defines them. For Chef Lambert it must be the cylinder. He uses it to shape, hide and contain any number of ingredient parts that give the diner a thrill of discovery. His Beet salad divides conical statues of the purple root around a foam puck, punctuated by ivory nipples of zesty goat cheese and crunchy pistachios. 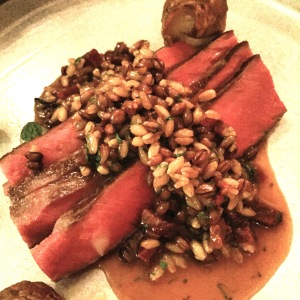 Being a New Zealander – where sheep far outnumber humans – I was dying to find out just how dexterously Lambert handles his lamb. And so when the rectangular, fork-tender slithers of picture-perfectly pink tenderloin arrived, I couldn’t help feeling a little sad for how lonely they looked until their table-side garnishing of a lusciously minty granola of mixed grains gave the dish an unexpected twist and crunch. Equally unexpected was the pair of Jerusalem artichokes both pureed and then hidden inside their own wafer-thin, crisp-fried skins. In case you were wondering, that’s how you spell Michelin!

The circular crescent of Berkshire Pork (tenderloin and belly) done two ways, with a pillbox of kale that was shredded into moss along with a cauliflower floret and a mandarin slither or two, managed to capture most of the colors of the rainbow onto a single plate. And the flavor-forward Beef with salsify, eggplants and a delicious lobster cream scored even more goals for the Kiwi team.

Chocolate is by all accounts the popular dessert du jour. It’s a rich log of gooey, chocolatey goodness teased by a Shirley Temple ringlet of salted caramel toffee. This was followed by another cylinder (a sweet one this time) that encased the even more challengingly sweet Bananas Foster, surrounded by bits of cake and a squiggle of lemon, but the Passion Fruit Pavlova is pure drama. While an innocent-looking meringue cylinder is supported by a medley of strawberries with a dribble of passion fruit – there lurks a thick shot of sweet cream deep inside for subsequent discovery… This dessert comes with a message. In my case it read: “Happy Birthday” – but what it secretly meant to say was: “Do Not Share!”