Having not dined in South Africa’s “mother city” for more than a dozen years, it came as no surprise that the local culinary scene has moved on – and then some. On one hand, I couldn’t help feeling a teeny bit nostalgic to notice bedrock establishments like La Perla, Ari’s Souvlaki, Panama Jack’s and Blues have all endured the 20 year arduous transition from apartheid to democracy, from economic isolation to destination envy, from world pariah to world cup – with unchanged menus and décor in tact (barring frequent electricity blackouts and currency devaluations), while on the other hand, exciting new bistros with eclectic chefs in gentrified neighborhoods with huge fan bases are all vying for a seat around table mountain.

So regardless of whether you happen to find yourself at the most gorgeous tip of the continent for a short, medium or undetermined length of stay, there are (thankfully) a handful of adorable bistros well concealed from the camera-flashing, “is-the-meal included?” inquiring tourists oozing out of mega-coaches all over town.

For instance, when you exit the glass elevator at the top of the disused biscuit mill in an unlikely industrial part of Woodstock, Luke Dale-Roberts’ Pot Luck Club administers 10,000 volts of unbridled energy into the concrete, wood and window “room in the sky,”  like a cricket bat to the back of the head. The multi-award winning gastropub is obnoxiously popular for its Afro-Euro-LatAm-Asian-influenced tapas – divided into the 5 main taste groups of Sweet, Sour, Salty, Bitter and Umami. Given the defiant lack of menu focus from the get-go, it’s hardly surprising that there are some misses among the hits – but the hits are certainly worth mentioning.

Who would think to reinvent Crispy Calamari with a velvety smooth and flavor forward bed of zesty Cape Malay lentil curry? And I would, without hesitation, add Roberts’ Smoked Beef Fillet to my final-meal-on-the-planet list. After the first morsel of the ultra-tender, marbled steak surrounded by the most unforgettably delicious, creamy pool of black pepper and truffle spiked “café au lait”, I secretly hoped for a “load shedding” event (the South African P.C. way of saying “rolling blackouts”) so that I could snatch the “sharing” plate away from my party, and gorge myself in total darkness.

The stiffly fried Beer battered Fish also took on a Malay flavor – thanks to the cardamom and saffron aioli and the green mango Atchar – which is a salty, mustardy, citrusy pickle used to spice up food and marriages, as well as grow hair on the chest.

The desserts were an equally disparate mix of cultures and influences starting with a Bunny Chow, which can best be described as an “interesting experiment” – where spicy white chocolate found its way inside a slice of banana bread, topped with fruit preserves and accompanied by the most formidably overbearing cucumber sorbet ever attempted. But all was instantly forgiven when the donut-hole shaped Tonka Bean Churros emerged with a finger licking, lip smacking, malted chocolate dipping sauce – which instantly time-warped me back 35 years! 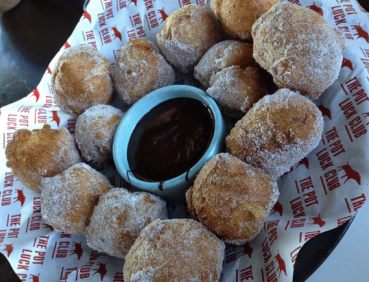 As it happens, one of chef Roberts’ protégés, Frank Marks, recently opened his own fresh-ingredient-focused, concept bistro called Borage. I use the word “concept” because being located in the heart of Cape Town’s CBD, the gray bistro-in-a-box caters chiefly to high-octane power breakfasts and business lunches (before the downtown area pretty much empties out) with only two dinner services a week that conclude promptly at 9pm. Marks also hosts a monthly, invitation-only “Supper club”, featuring the multi-culti talents of young up-and-coming chefs. In fact all students currently attending the famous Silwood Culinary School get to spend a period of their academic education prepping, cooking and scrubbing at Borage, Pot Luck Club and (the impossible-to-get-into) Test Kitchen before they can graduate.

Marks’ modest menu features 4 starters for under $10, and 4 mains for under $18 plus a very limited, but hand-selected local wine list. 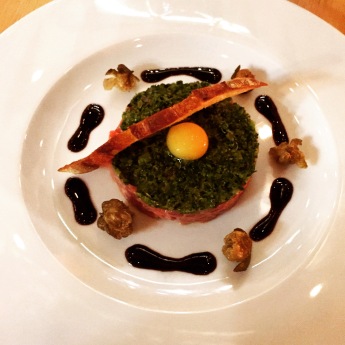 You realize when you bite into the quail egg topped, green parsley canopy shrouding a wonderful blend of Beef Tartare with gherkins and capers on wafer-thin ciabatta, that the emphasis is all about allowing the fresh combinations of the local produce do all the talking. 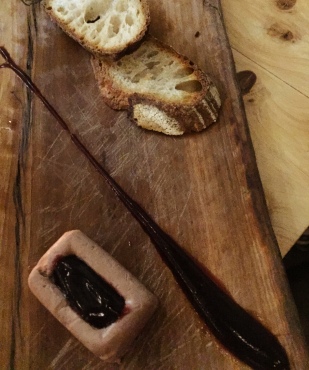 I have tasted swooshes and shmears of just about every liquid reduction on the planet, but just the very idea of a glühwein gelée to bolster an almost foamy domino stone of Chicken Liver and Foie Gras Parfait, opened a whole new lexicon of taste for me. I was also intrigued by how subtly Marks’ sauces complimented his mains; a rather simple but hearty red wine reduction for the Sirloin, a spicy au jus that was born from at least one Bordelaise parent for the Duck, and a magnificent pickled beetroot gel for the Kingklip. Given that our table was the only thing in the way of the crew’s quitting time, the service was remarkably and uncharacteristically swift.

In general terms, Cape Town’s cooking can range from hearty and decent to unique and inspired, but like a few obstinate lumps in an otherwise smooth gravy, South Africa’s omnipresent collision of 1st and 3rd worlds emerges when spotty service can unfairly tarnish a kitchen’s shine. It’s one thing to order a spectacularly described, farm-to-table-influenced, salivation-inducing item off the menu – but quite another to have it served! 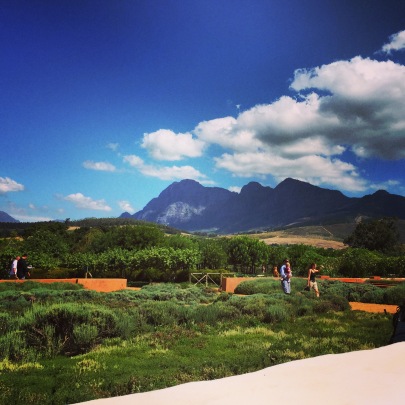 Let’s take Babel as an example. The 45-minute drive inland, plants you firmly in the heart of the wine country – with roly-poly hillsides replete with vineyards, olive groves and Cape Dutch gabled, thatch-roofed structures dating back 300+ years. And one of the most impossibly beautiful estates between the historic towns of Paarl and Franschoek is “Babylonstoren” – the poster child for hand-raised, organic, fair trade, free range and bio-dynamic foods.

I am talking about 200 hectares of immaculately landscaped and symmetrical fruit orchards, prickly-pear mazes, herb and salad gardens, gourd tunnels, chicken runs, citrus groves, vegetable patches, fish ponds…all in the shade of an idyllic cookie-tin valley with mountains, streams, horses and of course the obligatory winery. On the premises of the estate – which also boasts a boutique hotel and spa, is a casual, airy restaurant called Babel, with a dozen tables in and outdoors. The menu looks like the centerfold of a well illustrated “Jack and the Giant Beanstalk” popup book – and it reads like a shaman guru’s shopping list.

Appetizers are offered in three colors: Green, Red and Yellow. (Apologies for transcribing the menu here, but there is no better way to do justice to this cornucopia of ingredients, all freshly picked that morning.) 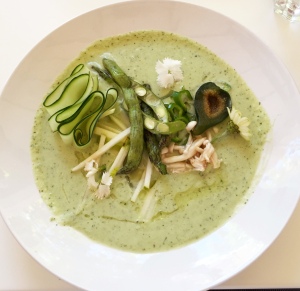 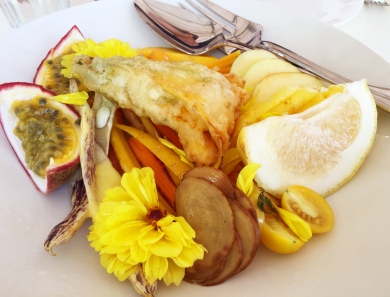 With this many different (yet surprisingly well matched) ingredients, it’s hard not to be amazed at the restrained barrage of flavors, colors and textures. Every morsel, every bite yielded a whole new crunchy explosion of fresh sweet and sourness – like a fireworks display with different bursts of wonder and pleasure with every passing second.

I can tell you what main dishes we ordered, but unfortunately they have yet to be cooked, served or eaten. Instead of being fed on Lamb Cutlets with Greek basil and lemon sauce, or a Cauliflower Sandwich with gorgonzola and macadamia nuts, or Fresh Linefish with crab apple butter and salsa verde, we were fed to bursting with a 2-hour litany of explanations and apologies that ranged from “ your order is being plated now” to “the head chef didn’t show up for work today” to “it’s a new menu and no-one knows how to make it yet.” Oops!

And closer to town at the casual-chique, mostly Mediterranean Kloof Street House – an eclectic Victorian villa of interlinked dining rooms lined with fabric wall panels and bookcases filled to the pressed-steel ceilings with colonial tchotchkes and a noisy clientele of trust-fund babies with plenty of time on their hands, one of our orders didn’t quite make it to the kitchen, and so one of us watched – while two of us chewed. Oops!

But before you resign yourself to lowering your expectations, it is probably advisable to focus on the rest of the experience instead. Like sitting in front of one of the big windows at The Harbor House in Kalk Bay, perched on the very edge of a treacherous rocky cliff, while a ferocious Indian Ocean thrashes mercilessly below, as you calmly pick through a bowl of hearty West Coast Black Mussels in wine, garlic, thyme and cream, or tender Calamari sautéed in fragrant smoked paprika with olives, or even a plate of magnificently succulent Mozambique-style grilled Prawns in lemon and chili. Fresh, solid and reliably enjoyable.

And finally, no trip to Cape Town would be complete without a stop at Bizerca Bistrôt near Heritage Square. The French-influenced local fare is offered as evergreens on the printed menu, and an even longer list of daily specials on mobile chalk-boards. Highlights included the house-cured Raw Norwegian Salmon Salad with salty notes and a lively goat cheese, soy ginger and shallot dressing. Another crowd pleaser is the Butternut Gnocchi – which has a soft center protected by a crispy sautéed skin with melted Parmesan and roasted vegetables. The Seared Ostrich Fillet could have remained on the fire for another sixty seconds for my money, but the coin-sized medallions of fat-free steak always takes the top spot on the poultry family tree. Figs and beetroot with plum sauce were the perfect sweet and tangy contrast to the tender, umami delight.

Most of the ubiquitous sweet, sour and chocolate desserts are no match for the most earth-shatteringly delicious deconstructed Apple Pie ever to leave a kitchen. The 45-minute pre-order time faded into distant memory when our waiter lowered a flat, flaky, 4-inch square pastry tile, covered by a doyly of hot, caramelized apple relish with a single ball of the most decadently scrumptious crème fraiche ice-cream. Just one hot/cold/creamy/crunchy/toffee bite instantly blurred the lines between well-mannered human and greedy beast!

One thought on “Dining in Cape Town”