The mere expression “Spanish tapas bar” instantly conjures up a very familiar expectation of a Spanish inspired, small-plates snack bar. It is therefore brave and admirable for Alex Raij and Eder Montero to create a derivative in their Chelsea slither of a bistro – El Quinto Piño, that’s just as traditional as it is bold and quirky. The charming comedor room off of the curved bar feels familiar and intimate in its simple understated design, with mismatched chairs, interesting lighting and a large sound-absorptive woven tapestry.

The large menu features sufficient “usual-suspect” dishes to satisfy the purists intent on reliving that distant Spanish vacation (or the opportunity to show off their international-ness to their less-travelled friends). In addition there are a few bold spinoffs that improve on the original, and a couple of quirky creations to bolster interest (and stars) amongst the food critic literati. While most of the menu undergoes periodic regional rotation to retain freshness and an element of the unexpected, there are a few permanent staples that are mentioned on a variety of must-try lists.

No tapas bar in its right mind would ever dare open its doors without the mandatory Nuestras Bravas (fried potatoes trickled with spicy aioli), Pan amb Tomaca (tomato and garlic rubbed bread with salt and olive oil) and those crusty shelled, delightfully creamy potato and Serrano ham Croquetas – all of which are as reliably delicious as they are popular and more than make up for the somewhat bashfully-flavored and under-toasted shrimp and squid Fideúa (Valencia short noodle paella).

On the bold side, creating a po’ boy styled Bocadillo de Calamar has all the best flavors of delicately fried and exquisitely crispy squid legs, adding crunch and sweetness to a tightly wrapped vegetable sandwich. I would also have to concur that the Uni Panini deserves its position as one of Eater.com’s Top 20 sandwiches in all of New York. But while I adore the flavor of sea urchin, I wish someone could have warned me about the lightning-bolt shock of sinus-clearing mustard! 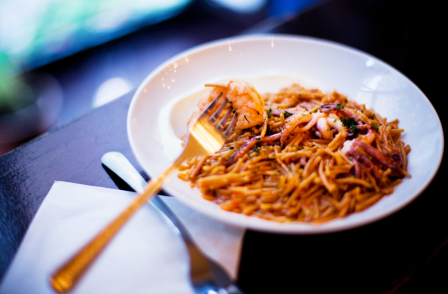 And finally some of the quirkier options that include the Arroz Brut de Conejo, which is a cabbage stuffed with rabbit meat and rice, or the crispy and rather harshly intense ocean-floor surprise taste of sea anemones cooked into soft scrambled eggs known as Revuelto de Ortigulla.  The proof that Raij and Montero have solidly catered to just about everyone’s culinary comfort zone is directly proportional to the persistence required to snag a table.