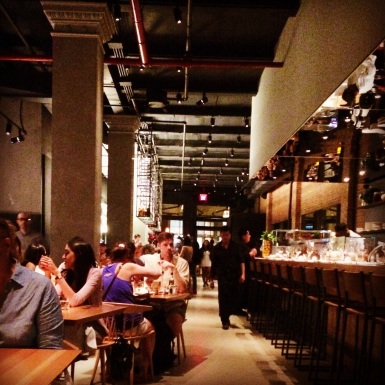 Obicá. The Grand Palace of Mozz

Silvio Ursini is probably not a household name amongst New York foodies, but one of Bulgari’s top creative executives for their Hotels and Resorts division just so happens to have also founded the world’s first Mozzarella bar a decade ago. The concept behind Obika was to create a restaurant around several different varieties of fresh gourmet Mozzarella, milked exclusively from water buffalo in the Campania region of Italy, and thereby earning the much coveted, but seldom seen, “Protected Designation of Origin” certification. 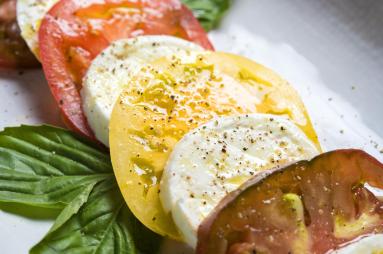 I vividly remember been blown away on my first visit to the bar in Rome’s Parlamento district, by the creamy sweetness of each of the four cheeses, complemented by their feather-soft texture from skin to center. (I should have a penny for every time I’ve had to plough through “so called” Mozzarella di Buffala, that was either tight, runny, hard, crumbly, sour, chalky or ho-hum.)

Ursini’s little idea turned into a global brand with eighteen mozzarella bars worldwide. To celebrate their tenth anniversary, they just opened their newest location and renamed the brand Obicá, which means “here it is” in a Neapolitan dialect. And so if you stand just off the northeast corner of Broadway and 21st, you too can say “Obica!” 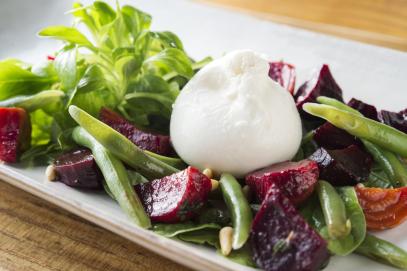 The battleship gray, sleek interior with mirrored surfaces and discreet lighting feels more like a Japanese designer boutique than the Grand Palace of Mozz, but the four brine-filled tanks housing the baseball-white puffs of goodness flown in twice a week is unmistakably why the place is so crowded. The “Classica” is what all mozzarella dreams it could be: sweet, smooth, silky, light and ever-so-slightly salty. The almost caramel colored “Affumicata” has a sharp and distinctive hay-smoke bite to it. The “Burrata” is the runnier, cream-centered version of the classic, and it’s brother “Tartufo” is infused with black summer truffles.

You can order them solo, with Salumi or Antipasti, on Bruschetti, deep fried (In Carrozza), on pizzas or in several salads (the Caprese Classica is a cheerful collage of multi-colored tomatoes, and the Beet salad has roasted pine-nuts and string beans for crunch).

Unlike their lunchtime bar in the IBM building on 56th street, chef Enzo Neri’s menu elaborates way beyond the Mozz to include more substantial dishes like his signature homemade pastas, pizzas, seafood and vegetables. The Rosemary flavored Pappardelle al Ragú di Anatra e Arancina has an incredible Tuscan-style duck ragú spiked with a surprising zest of orange, and the Taglierini di Botarga e Granchio is like an enchantment-under-the-sea dance with a blend of crab ragú with roe from Sardinian mullet, topped with fresh sea-urchins. 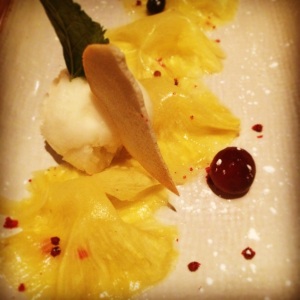 The desserts are a very fresh respite from the usual institutional suspects. Three guesses what cheese the Crema de Ricotta comes from…Mmm!

And what better way to walk home than with the crisp and lingering taste of Ananas Carpaccio – X-ray-thin, mint syrup marinated Pineapple slices with lemon sorbet and pink peppercorns.

One thought on “Obicá review”