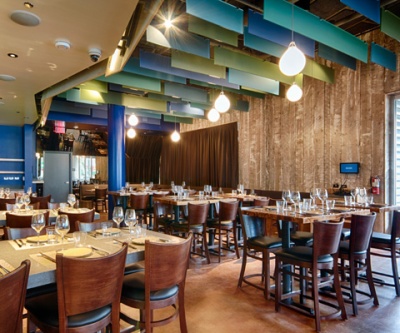 If you’ve ever found yourself gastronomically disoriented by a cuisine that combines the best of Chinese, Japanese, Spanish, Italian and African flavors into one, you are most likely sitting in a Peruvian restaurant. And while the global kitchen shrinks and international flavors merge, it’s no wonder that Peruvian cooking is quickly becoming the world’s “fusion central”.

Most exported Peruvian toques tend to stick to traditional and popular drinks and dishes like Pisco Sours and Loma Saltado. But once in a while someone like Ricardo Zarate dares to stick his head out of the window and share some of the truly inspired tastes from this colorful and fascinating culture.

The concept behind Paiché (which is a really large Amazonian air-breathing fish) is Peruvian cooking with a very pronounced Japanese influence. It starts with a staggering menu of small plates that includes Sashimi’s and Ceviches, Tempuras and Tortillas and of course Wagyus and Quinoas.

The Pisco-heavy cocktail list is tremendous, cementing Zarate’s intent to create a Marina Del Rey based Izakaya bar. The Sea Bass Ceviche is as traditionally zesty as it gets, but is layered slightly above the Leche de Tigre (Tiger’s milk) so as not to overpower the delicate flavor of the fish. The signature Paiché comes fried to a sharp crisp and the accompanying Aji Amarillo (ubiquitous Yellow Chili) aioli is delightfully refreshing. 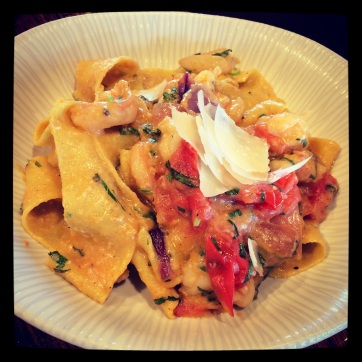 The Soltado de Camarones is one of the many departures from convention, where gift-wrapping-wide homemade ribbon noodles accompany the sautéed shrimp in a familiar, yet creamier Lomo Saltado sauce.

The Niman Ranch Pork Belly is a wonderful kaleidoscope of extremes, from the soft squash puree to the crispy pork crackling – and just about every texture in between.

But the Uni Shrimp Toast is worth every hour of inching through Friday afternoon traffic on the 405. Starting with a butter and shrimp paste-soaked crust, layer upon layer of goodness and sweetness from pickles to honey is finally topped with fresh Sea Urchin and chili sauce. Its like a song that you just can’t (and don’t really want to) get out of your head. 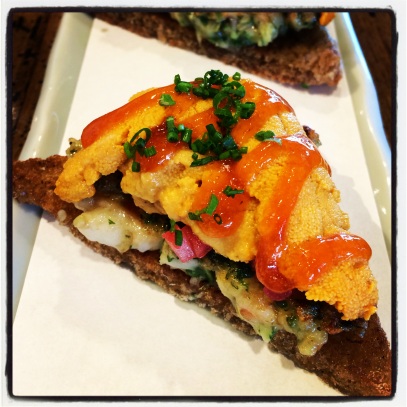