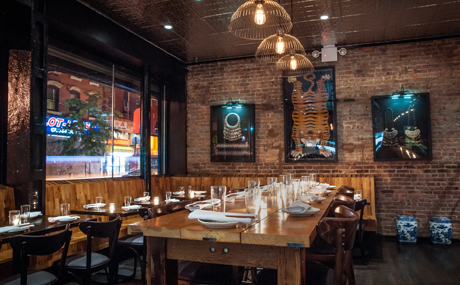 When chefs leave restaurants, the impact to a kitchen is far greater than say when a captain leaves his ship. Ships aren’t really expected to do much more than shlepp passengers (who prefer to travel in hordes, unpack only once and who are quite comfortable with their first impression of a foreign destination being the port) without fuss, plague or delay. Restaurant kitchens on the other hand have hungry, expectant, impatient, picky and frequently critical diners to feed, a reputation to uphold – all while serving countless renditions of the same dish monthly, weekly, daily, hourly, minutely without a single fluctuation. Chefs can’t cut corners. They aren’t allowed to improvise or compromise because they are ultimately the first and last reason any diner recommends, revisits or pans a restaurant. So when Doron Wong took over the leadership from Travis Post at Yunnan Kitchen in the Lower East Side over a year ago, he created a fresh and affordable menu with sharable dishes offering a spectrum of Yunnan province flavors – from aromatic petals to gasket-blowing peppers that are part of the reason there is still a pervasive line outside the door. 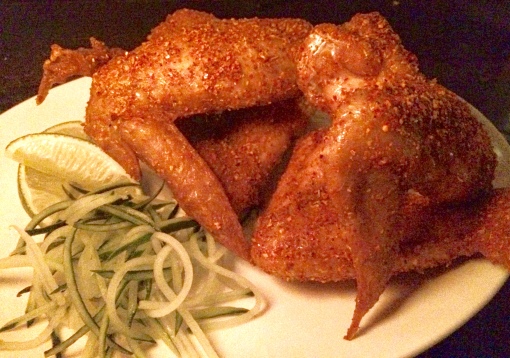 If New York has flower, theater, diamond and garment districts, then the Lower East Side is the uncontested eclectic food district. Yunnan Kitchen’s rustic space with Clinton-Street-de-rigueur exposed-brick, pressed-steel ceilings and dim lighting is pretty much the final outpost in a row of distinctive and original establishments, where reservations are seldom offered.

Wong has a few signature cocktails that debut many of the spices and aromas that are about to color and define the rest of the evening. The first appearance (of the seemingly abundant) Sichuan peppercorns is added to a sweat-inducing grapefruit, chili, tequila Rita. The next most reached-for ingredient in the house is Chrysanthemum, which becomes the cornerstone for an aromatic, sweet ‘n sour Daiquiri with splashes of citrus and St. Germain.

The broad measuring-tape-sized Spicy Pulled-pork cold noodles, snake around morsels of barbecued pork and cherry tomatoes, which are dressed in chili oil with a more subtle infusion of Chrysanthemum giving them an unexpectedly fragrant – yet spicy perfume.

Notwithstanding the addition of flecks of ham and the odd chili, the Stir Fried Mushrooms felt a little rubbery to me, with perhaps too much restraint in the flavor department to warrant a position on the very cautiously selected 16-item menu, but the Mushroom Rice Cakes are fabulous. Diagonal slithers of a dense yet remarkably light rice cake, are warmed with the smokiness of fermented chilies in a thick, rich and hearty brown sauce. 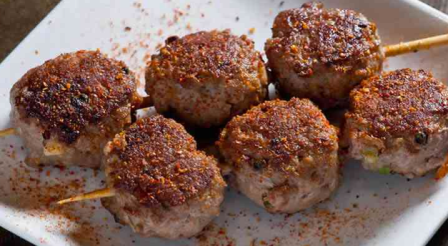 The addition of Yunnan spices to the soft and perfectly juicy Lamb Meatballs Mao Shao is yet another brilliant example of distinctive simplicity.

The all-time favorite Ma La Chicken Wings (with shoulders attached) are an absolute knockout. As you bite through the dry crunch of the ochre skin, waves of warmth begin to envelope your senses from your lips to your nose to your toes, as the unrelenting heat of the Sichuan peppercorns serves up the first punch, followed by a surprising left hook from the Numbing Spices. I managed two rounds before tapping-out. 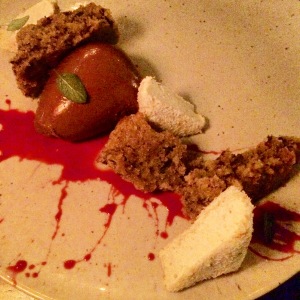 The only real disappointment was the Ma La Chocolate Crémeux. The fact that Asian desserts have never found a fan base in the US is nothing new or surprising, but because there was only one lonely option on the menu I felt compelled to give it a try. The doughy train-wreck of a biscuit that tried to commit suicide on uncooked cumin, flanks a scoop of Sichuan pepper-infused Valrhona Chocolate Mousse with curiously sticky marshmallow triangles, feels out-of-character and heavy-handed to have emerged from this kitchen. (Maybe chef Wong can sneak in something simple from one of his neighbors up the street. Just sayin’.)