People often ask what’s my favorite food. It’s a very tough question given my proclivity to so many vastly different disciplines and flavors. I guess I’m always expected to gush over iconic Italian, flawless French or amazing Asian, but that’s only half the story. The other half has to be Peruvian. Few people realize how delicious, unique (and yet familiar) Peruvian cooking is. Having adopted tastes and flavors that are decidedly Creole, Spanish, West African, Chinese and Japanese, many of their dishes include garlic, ginger, soy, lime juice, a rainbow of colored chilies and heaps of rice. This little mountain nation has also produced some of the finest toques ever, like Vergilio Martinez – recently named “best chef on the planet” – not to mention getting the health-obsessed hooked on Quinoa, their staple grain.

Adding his American twist and a modern “Neuva Latina” take on classic Peruvian cooking, Eleven Madison alum Erik Ramirez’s Llama Inn adds to Brooklyn’s bounty of river-crossing-worthy restaurants in a big way. Despite its curious location sandwiched between the B.Q.E. overpass and Withers street, the striking three-sided glass box sports tables, counter tops, a roof-top lounge to go with the young, hip and decidedly Williamsburg-esque crowd. It’s also easy to get caught up in the electric energy of the kitchen and wait staff, who fall somewhere between a gracious host, a good friend and a lion tamer.

The menu is broken up into plate sizes from bar bites to (large) family portions. Some of which are expected, like a Whole Branzino Patarashca in banana leaves or a Quinoa salad, while others were a bit more surprising like Whole grilled Lobster or Steamed Clams. The same goes for the robust list of Pisco’s and Peruvian Sherries.

From our control-tower perch at the “chef’s counter”, it became instantly evident which dishes were the most popular. After watching several dozen Beef Tenderloin stir fry’s (that’s American for Loma Saltado’s) being assembled, and several hundred Anticuchos (Peruvian for kebabs) being fired up, I could quite easily replace any of the line chefs without missing a beat. The Chicken thigh kebabs were doused in a wonderfully flavorful fermented soybean and then spiked with a squiggle of wasabi-green chile, while  the Pork Belly char siu was punctuated with pickled chilis and a nub or two of spicy mayo. (Next time I have to try the single head-on Shrimp rubbed in adobo and lime – yet another crowd pleaser.) 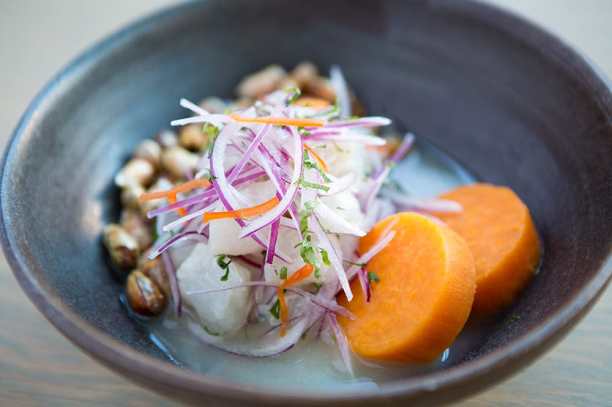 I lapped up the Sea Bream Tiradito like a thirsty kitten. It arrives dotted with persimmons to offset the tartness, and a cluster of walnuts for extra crunch. Simple, bracing and utterly refreshing. And once the fish was gone, I almost bent the spoon on the remaining mouthfuls of sauce.

But candles and cacti had to be relocated elsewhere to make room for the platter and trappings that accompanied the Beef Tenderloin Stir Fry. I’ve made and ordered many a Loma Saltado in my time, but this mound of joy before me was the epitome of loveliness. Large chunks of medium-rare marbled steak adrift in a deep, dark, rich, salty, vinegary Oyster sauce with seared onions and tomatoes, topped with a thatch of crispy fries. Our incredibly attentive waitress instructed us to eat it taco style on a wafer-thin scallion pancake, with a pinch of pickled peppers, some simple quac’ for color and a dollop of aioli for spice, and you are cleared for takeoff. With both hands engaged, guiding my first messy bite of an avalanche of flavors, I could practically see the Andes before me. And when all I had left was a swampy mess of sauce, a bowl of rice appeared from heaven to soak up every…last…scrumptious…drop! (Here I am just thinking about it, and I’m salivating at the keyboard.)

Not that I had any room or space or reason to quibble at this point, but I was a bit surprised not to see a few other traditional dishes that were on Chef Ramirez’s original menu, such as Skewered Beef Hearts and Braised Goat neck. It must be that sobering boundary somewhere between authentic and ambitious, or just how far Williamsburg palettes will dare to reach into the darkness of the unfamiliar, versus gravitating back to what they recognize. So instead of wolfing down a trio of Picarones (the donut’s Peruvian cousin), I settled on a slightly more American slice of Graham Cracker based Lime Pie with a freshly piped and torched snake of meringue which took the express lane straight to my happy place. 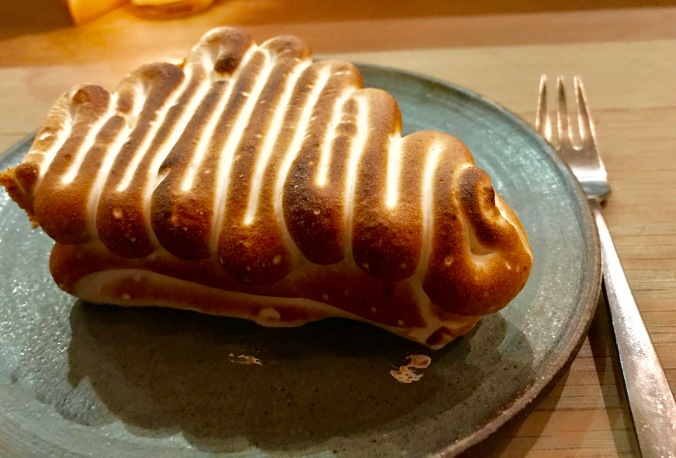 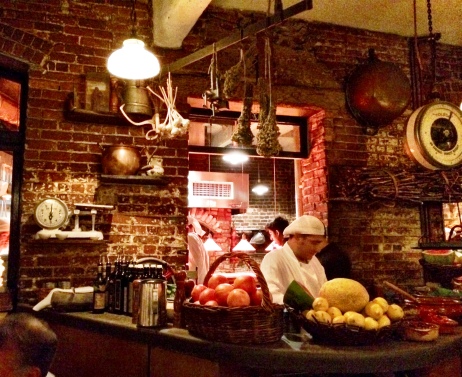 There are myriad reasons why New Yorker’s prefer not to eat Italian food in Little Italy. Too many gullible tourists who think it’s authentic, too many look-a-like rooms boasting near-identical menus, too much pressure from manipulative, apron-wasted, hair-slicked-back sidewalk talkers, too many other good options vying for their dining dollars, or perhaps because one can only eat just so many meatballs and just so much red sauce.

It’s therefore doubly curious that Frank DeCarlo’s rustic exposed vintage brick, concrete-floored, wooden bench filled ristorante Peasant not only dared to defy his neighbors by not succumbing to any of the Italo-American staples and (quite literally) build his own wood-fire oven and rotisserie kitchen, but that his success story has endured the renaming and reshaping of the neighborhood some 15 years later. If you ask any New Yorker if they’ve ever eaten at Peasant, they will probably say: “Ages ago. Is it still around?” Not only still around but DeCarlo has been consistently packing them in long before, during and (not surprisingly) after Michele Obama and the first daughters’ recent visit.

The menu runs the gamut of delicacies from earth, sea and sky, with just enough flavor restraint to allow the benefit of cooking at over 700 degrees to really pay off. The Acciuga E Radice salad is a wonderfully simple combination of mild white anchovies, radishes and crusty croutons tossed in a complimentary red-wine vinaigrette. The appropriately named Polpi in Purgatorio (Octopus in purgatory) though immaculately tamed in a garlic and chili butter would have welcomed a touch more tenderness, but the white-wine, garlic and breadcrumb encrusted Cannolicchi (Razor Clams) were a home run.

The primi piatti selections include a Risotto, a Gnocchi and a tight handful of pastas including a rich and decadent Spaghettini Ricci laden with roasted cherry tomatoes and fresh sea urchin. Even though the fire-crusted-skinned Orata alla Griglia (Grilled Sea Bream) looked rather lonely on top of a rosemary quilt with only a tiny goblet of herb butter for company, the pure ocean flavor and perfectly moist texture is indubitably the best I have ever eaten. 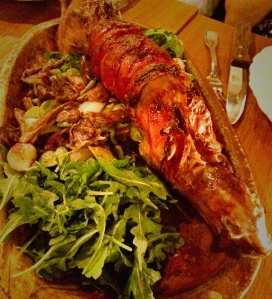 But the money on the table has to be the whole-roasted Rabbit. Although not on the menu, (my hunch says it will be very soon) the leporid is heartily stuffed with rosemary, (clearly chef DeCarlo’s favorite go-to herb) and then tightly wrapped in guanciale (pork jowels) which caramelize around the skin forming a smoky, salty and incredibly fragrant aroma. I realize that the thought of a rabbit stuck between the cheeks of a pig might put one over the edge, but the combination of these two worlds on one plate is utterly delicious and completely unforgettable. 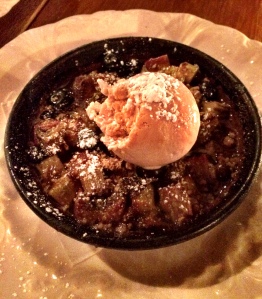 Somewhat more forgettable were the ten-more-minutes-on-the-cooker-would-have-done-it Rhubarb and Berry stew, and the overly-dense Chocolate Ganache, but thanks to our waiter’s theatrically gesticulating descriptions, via his thick yet disarmingly authentic accent, the dessert options are certainly worth hearing about.