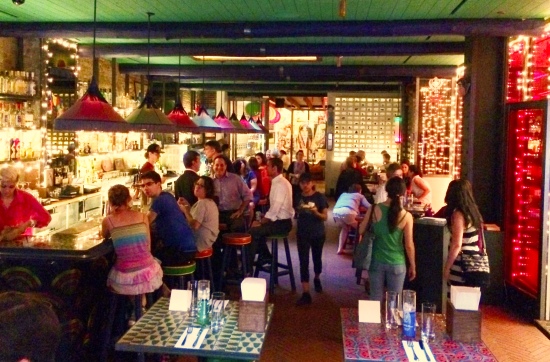 Just because the two-bite-sized taco in your right hand bears no resemblance whatsoever to the ones you ate at that cute little Tex-Mex cocina outside of Houston, or the ones they deep-fried and served from oars on the beach in Ixtapa, doesn’t mean that this isn’t a taco. In fact apart from the tortilla press churning out 5 inch discs of flattened maza at the edge of the bar, there’s absolute nothing authentic about April Bloomfield’s Murray Hill Mexican gastropub Salvation Taco. And you know what else? I don’t care!

Located on the ground floor of the Pod Hotel, Bloomfield and partner Ken Friedman have put together yet another reservation-less hangout for food freaks amongst a cacophony of loud colored walls, noisily tiled tables and apple green ceilings – with the odd quasi-religious deity here and there. There’s definitely something enjoyably naughty going on here – and everyone seems to be in on it. If you’re stuck for conversation, just point at something around the room and trust me, the rest will happen.

While many of the items sound Mexican, they only bear a distant relationship to their forebears. The menu starts off coyly enough with a dozen “Snacks” from Spicy Nuts to Chips and Guacamole and before you know it – you are staring down at the cutest little torpedo-shaped dough wedges filled with gooey Chihuaua Cheese and Serrano ham. Unlike any other Empanadas you’ve ever tried, the good news is: these will explode in a single mouthful. The bad news: too few mouthfuls to go around! 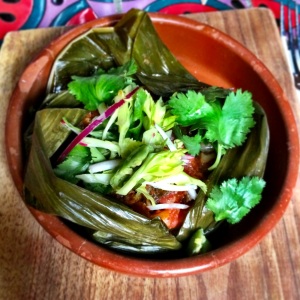 We skipped over the Pig’s Head Tostada (with crispy ears and pan-seared cheeks) and tried the Mexican Sticky Rice Tamale instead. Surrounded by a banana leaf, little chunks of aromatic Chinese sausage and morsels of pulled pork are dotted over a small, hot square of rice cake in a sublime sauce.

Under the “Taco Dinners” it was a tough toss-up between the Roasted Lamb Shoulder, that the couple next to us were busy tearing apart and shoving into fresh tortillas topped with Cucumber Pico de Gallo and Crema, or the Beer Battered Fish Filet with Tartar and Mayan mayonnaise, (our enthusiastic and bespectacled waitress’s favorite) but we finally settled on the Korean BBQ. This prompted a visit from one of the kitchen staff who proceeded to cut a large and delectably marinated, fire-roasted loin with a large pair of scissors, while firing off a barrage of questions about our heritage, our commute, our love life and other vital curiosities as she explained the tray of flavor accoutrements: crunchy pickled Daikon radish, fresh scallions, house-made Kimchee, Furikake and seaweed spices and a thick (and liberally salted) hot sauce – all the makings of the most inauthentic Taco ever. 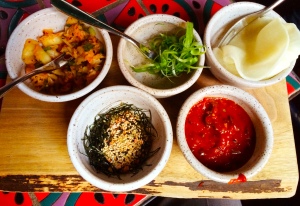 Thereafter the menu shrinks again with half a dozen different kitchen-assembled Tacos – yielding 3 per order. From the Carne Asada with sweet and spicy grilled Nopales (prickly pear), peppers and onions, to the Roasted Cauliflower with baby Farro held together by the most unbelievably delicious curried Crema – the kind that could easily transform anything into a delectable delight – backpacks and roof-tiles included.

For desert I only managed to get a whiff of the steaming hot, freshly fried and sugared Churros with a little pot of hot Mexican chocolate for dipping as I lingered (probably a little bit too long in retrospect) at the table next to us on our way out. 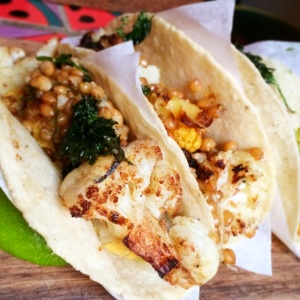 This might be Bloomfield’s irreverent salute to all things south of the border, but south of my midtown office after a long day at work, it is without a doubt my salvation (and I didn’t even mention the cocktails!)