Ok, so I couldn’t get a table at Noma. I tried multiple times under multiple pseudonyms, using any number of different email addresses at ridiculously inconvenient times of the day – but all I got was older. So instead, I made do with a handful of Rene Redzepi’s many talented proteges who have all crisscrossed the Danish capital to create their own successful versions of New-Nordic cuisine.

For the unfamiliar, New Nordic principles include: Foraged or home-grown ultra-local, seasonal, organic ingredients that are sustainably raised by the chef’s own hands (or by the hands of those they trust). Gallons of bottling, pickling, fermenting, curing, smoking and preserving from bountiful seasons past, plus any number of animal, vegetable or mineral oils, not to mention a very staunch stance on repurposing any left-overs – even burned wood and coffee grinds. The good news: there’s no trash for anyone to throw out. The bad news: it’s up to the chefs to figure out how to repurpose it over and over.

And so, the main difference between the 4 restaurants below, is the extent to which their toques applied unique twists and turns to re-spin and re-jigger the identical ingredients in outrageously different ways. So, prepare yourself for a Danish version of Iron Chef played in very slow motion.

Californian-born Matt Orlando spent 2 1/2 years as chef de cuisine at Noma before opening Amass in 2013. It took him less than an hour to catapult the mural adorned, cinder-block loft onto the World’s Best 50 list. The 20 tables are luxuriously scattered yards apart with views of the open kitchen below the staircase, and the prolific herb and vegetable garden out back. Thanks to the generous spring harvest, the majority of the staggering 13-course Amass Menu was green forward with a couple of seafood photo-bombs. Instead of waiters, each dish is presented by a different member of the cooking staff who sported accents that ranged from Sicily to Sydney to Singapore.

The highlights included a flame grilled green asparagus in a deliciously creamy, salted lemon-skin sauce with lobster oil, which was covered by a what looked like a giant mushroom. As we smashed our way through, it turned out to be a cracker made from fermented “left-over herbs”. There was somewhat of a lengthy pause before we received a chilled, salty and savory curry-oil broth with magnificently crunchy young peas and sea snails, and without saying a word, the kitchen seamlessly adapted to our embarrassingly unbeatable pace, and shifted their prep and cooking into roaring high gear for the rest of the evening.

I lost count after we received the umteenth serving of untouchably hot, yet astonishingly morish fermented potato bread, paired with the most scrumptious onion, sunflower seed and rocket lettuce spread in the north. 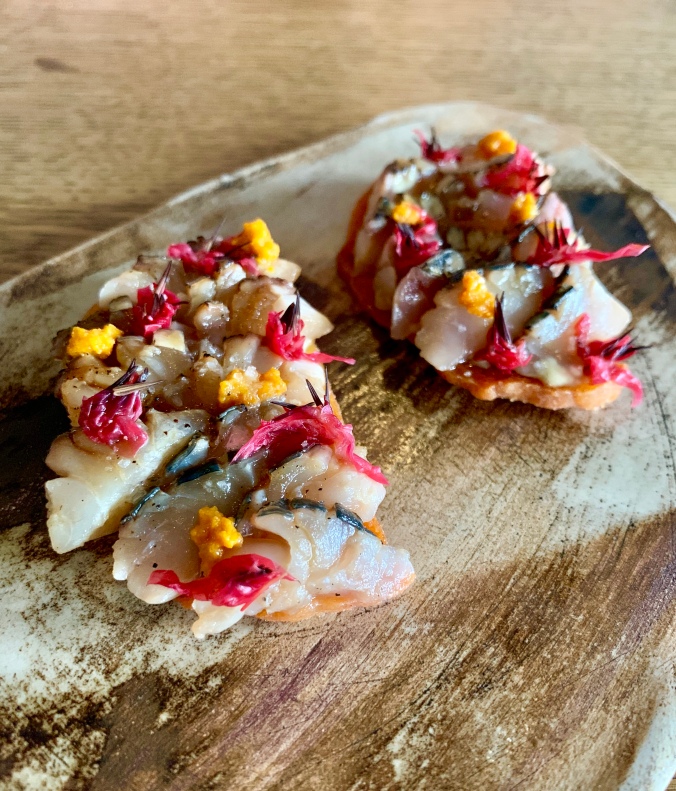 A fragrant slither of torched Danish mackerel arrived on a crisp cracker (yesterday’s potato bread, I’m told) with pickled borage flowers, yeasted citrus and a mere hint of heat from clementine chilies. Not just pretty – but pretty amazing too. There must have been at least 3 different twists on the turbot, but the one I still can’t quite get over, was a show-stoppingly flavorful horseradish-spiked turbot and mushroom broth. And what did they do with the fish bones, you might ask? Chef Orlando cooks them down for hours and hours, blends them into a mush and then somehow magically transforms them into ramen noodles. Same taste. Same texture. Brilliant execution.

Equally mystifying was how they candied the slimy “mother” from their home made kombucha into a sort of chewy, sweet-and-sour gummy-bear buried inside an almond sorbet with smoked malt. And a special mention for the ubiquitous and refreshing rhubarb juice which was infused into milk ice-cream, topped with a yummy crumble made from acidic yogurt and yesterday’s coffee grounds.

32-year old Kristian Baumann worked his way up the Noma ladder from intern to business partner. And in 2016 the Korean-born protege opened a Michelin star winning kitchen at 108, sporting a surprisingly short menu in a design-ery casual-chic room with bulbous light fittings suspended from a concrete ceiling. One of many interesting aspects of the Copenhagen food scene is how each restaurateur dispenses silverware for each course. Baumann commissioned a gorgeous custom-leather pouch from one of Denmark’s foremost design schools – just snug enough to hold a couple of knives, forks and spoons, but just too large to become a pocketable souvenir.

I came close to making an entire meal of their house-made crispy, fluffy, brown sourdough bread with salted cream – which has to be the frothiest, smoothest, most magnificently whipped butter you could ever stab a designer knife into. Being mid-season for white asparagus, Baumann served his 2 ways: thinly shaved and raw, covering a cooked version with a delectable sturgeon cream, pickled fennel and pumpkin seeds. More asparagus showed up with monkfish in a sumptuous sauce of elderflower, garlic and fennel.

The only major miss for me was the highly recommended lobster claw, which despite having its subtle flavors bolstered with lobster oil and lobster sauce, was completely out-punched by a disc of Instagram-ably beautiful, but pungent raspberry vesicles, which felt a bit like trying to hear a violin solo during a hurricane.

Two Noma acolytes who decided to look further afield than Copenhagen’s backyard to augment their supply chain are Christian Puglisi and Jonathan Tam. Relae, their 9-year old team endeavor with its heavy “lean into green” tasting menus, incorporates Italian olive oils and other bespoke items from foreign soils, is also on the World’s 50 best list. 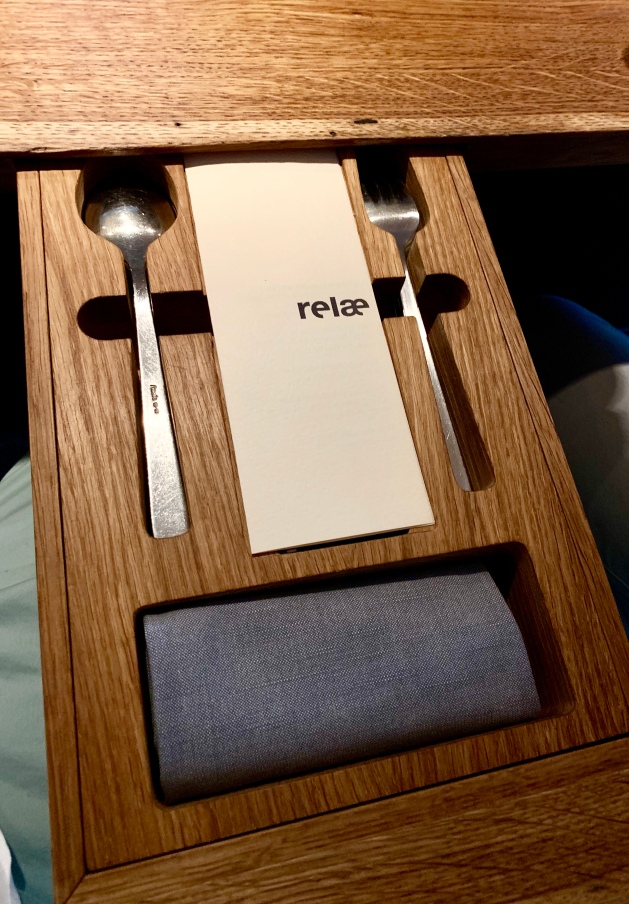 Their unique utensil-dispensing system via a secret under-counter drawer within reach of each diner, snugly houses a napkin, menu and bottomless supply of silverware in adorably carved-out cubby’s. The slightly-below-street-level corner bistro space feels intimate and charming with brick and dark wooden accents and picturesque views of an inner courtyard garden. Perched at one end of the prep area, we had a good vista of the goings-on (and off) of the young, energetic and international line crew. 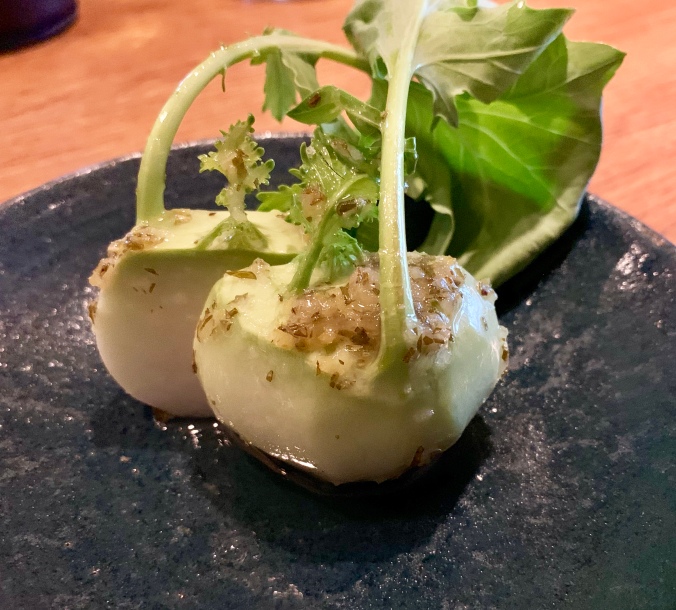 After staring at the raw food assembly line as countless lemon soles marinated in coriander oil were plated, we had a pretty good idea of what each savory and delicate layer would taste like, but the combination of just these few ingredients was where acidity meets sweetness in a heavenly marriage.

Other magnificent highlights included a miniature cannonball stack of new potatoes cooked with barley and then topped with a yummy, creamy barley sauce, spiked with a highly unexpected (yet thoroughly sapid) dribble of coffee oil.

Rhubarb made a couple of anticipated appearances. First as a compote with a delectable mousse concocted from an almost hay-tasting woodruff and then topped with a rhubarb gelée. And in a Nordic twist on the Lisbon classic Pasteis de nata, it sat on top of the tartlet made with choux pastry for an extra flaky crunch and a splash of balsamic vinegar, which sent it into another dimension of the deliciousphere. 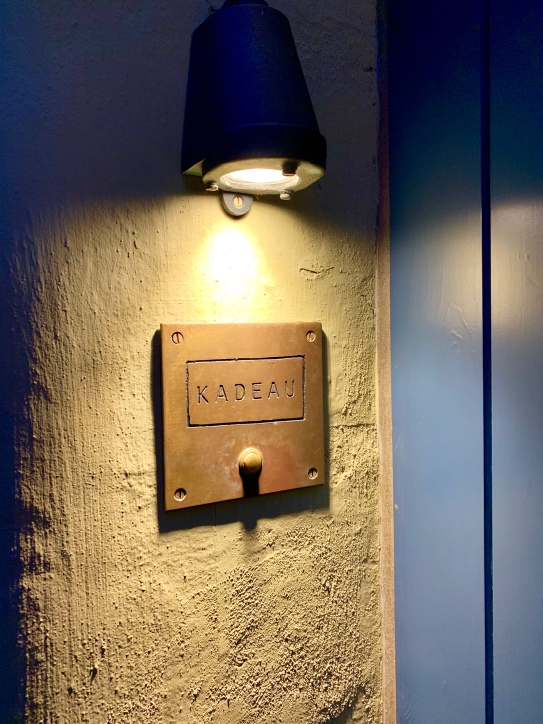 Unlike his fellow Danish toques, Nicolai Nørregaard did not fall from the Noma family tree. In fact, he opened his first version of the now legendary and 2-star Michelin Kadeau on Borhnholm Island, about 100 miles off Copenhagen’s coastline. Having already set up a sustainable supply-chain of fresh and foraged ingredients on the island, he now ships them in to his very understated 10-table bistro in Christianshavn.

The 2 ½ hour, 18-course tasting menu was as surprising as it was entertaining, where (once again) an attractive and cosmopolitan team of fastidious chefs presented bite after bite from the mundane to the exotic, mixing and matching seasonal meats, fruits and vegetables of the land and sea – a tribute to the smells, tastes and textures of his island heritage. To say that everything was perfection on a plate is an understatement (but at $325 a seat, it probably better be!) 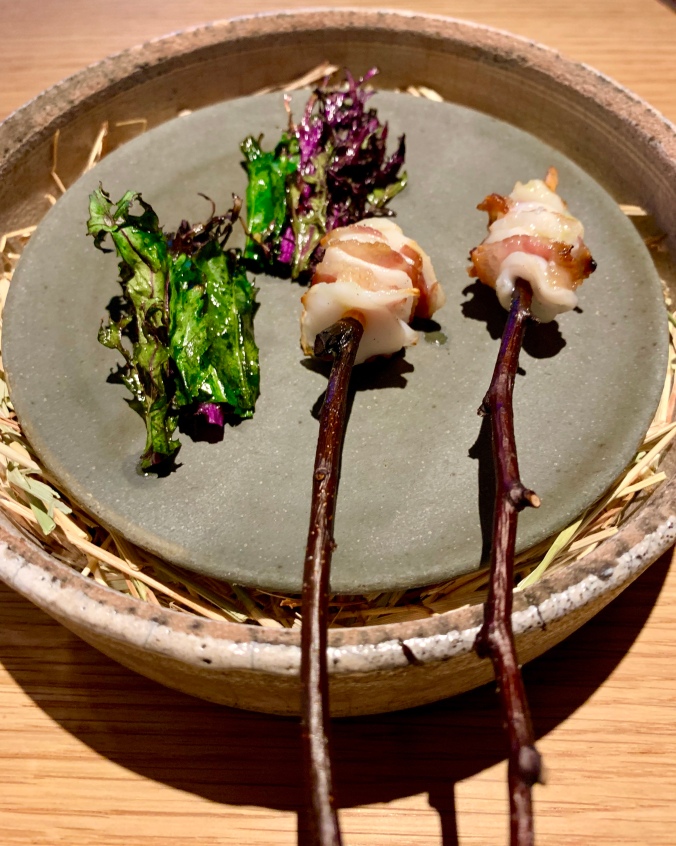 Standout servings include two skewers of Danish squid and lardo, a duet I would never have matched on the same plate – let alone on the same twig. 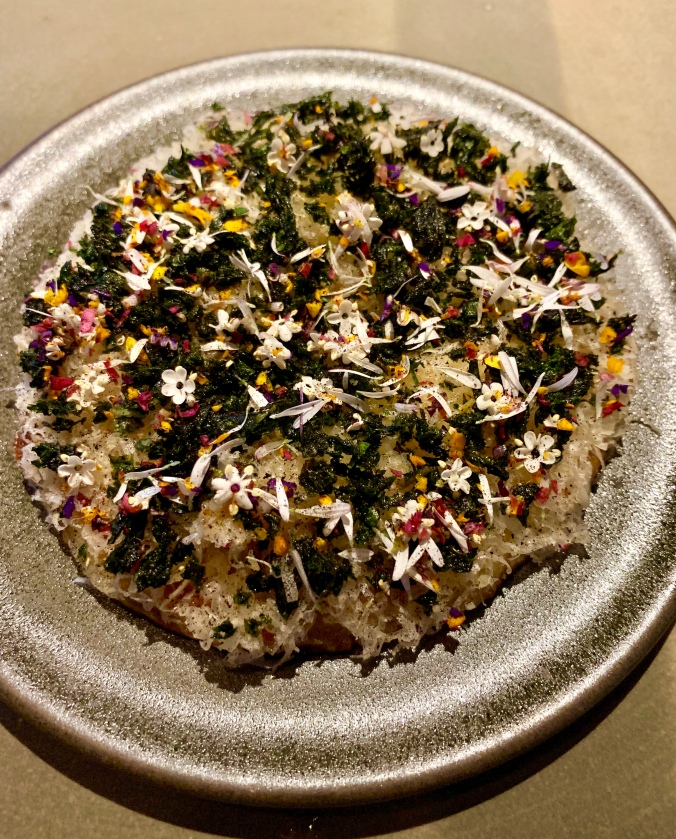 Equally heavenly was something called a porridge pancake (think – Danish taco), smeared with beef fat and splinters of steamed king crab, sprinkled with aged goat cheese, toasted flowers and herbs which had to be rolled up and then gulped down.

In retrospect I wish I would have taken even more time to savor the monumentally flavorful 2-year old Horse mussel from Faroe Island, that had been brined in salt for 2 days, then smoked and fried in brown butter with cider vinegar before being decorated with dollops of preserved beets and pine fir. Both Michelin stars, right there. 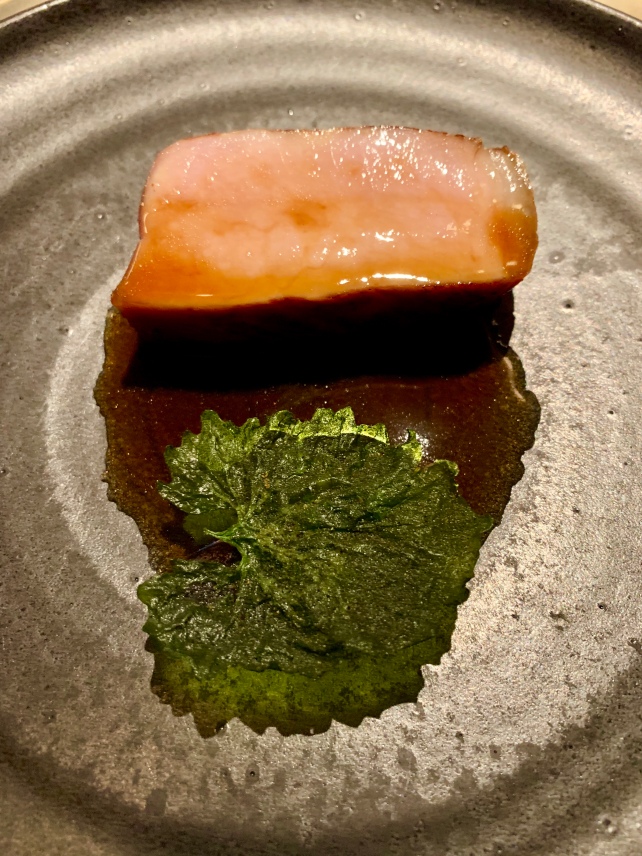 Can’t not mention the 4-week aged slow-roasted pork loin with a magical pesto of black garlic and pumpkin and the most staggeringly delicate sauce from roasted chicken wings. 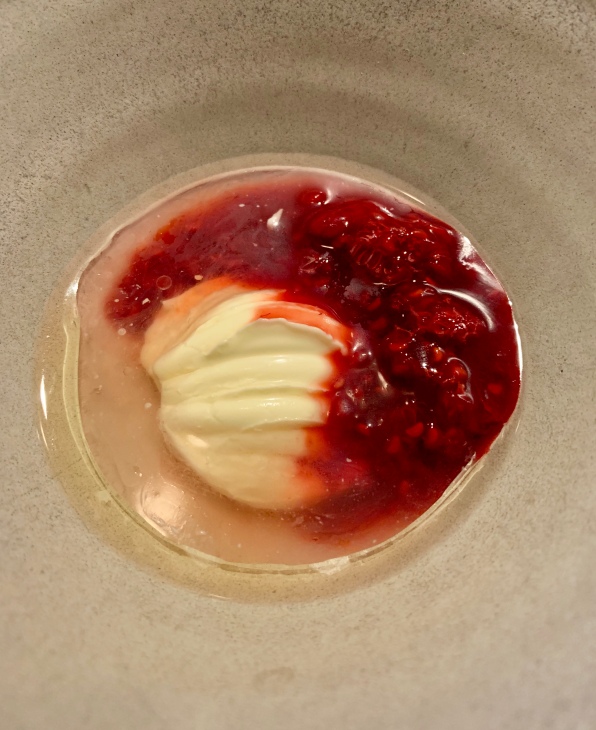 Of the 5 desserts, a thunderous applause for the smoked wood-oil crème-fraiche and raspberries laced with golden raspberry and gooseberry juices plus a few splashes of walnut Akvavit for the back of the throat, but a standing ovation for every crumbly bite of the warm honey cake served with acculturated butter. OK, and maybe the milk ice-cream in brown butter toffee too. So, don’t cry for me, Noma.