Is it just me who finds it rather bizarre that even though the Wright brothers pioneered flight on these very shores, or that the world’s first commercial airline began operations in this country, why then are US carriers so embarrassingly dominated and overshadowed by their international counterparts? Whether it’s the aircraft livery design, crew uniforms, cabin interiors and comfort, or service in the air and on the ground, United/Delta/American seem stuck in a decade-long taxiway before finally pulling up to match that ever-rising standard. There’s hardly a passenger who would disagree that the worst part of air travel starts and ends at the airport: You can miss at least one birthday standing in the bounty of lines. There’s nowhere to sit. None of the phone chargers work. Vintage dust abounds. There’s never anything to do when your flight is delayed. And who can tolerate those dysentery-inducing food-chain options? 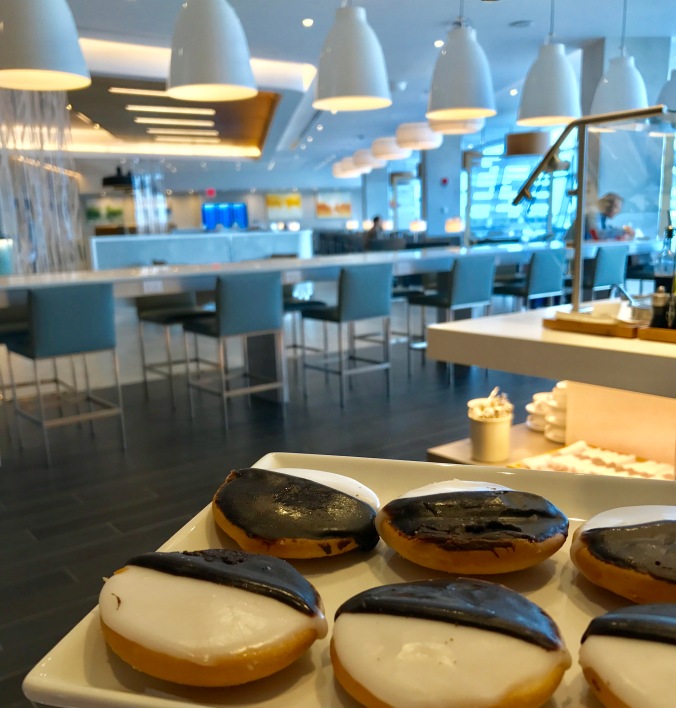 Well, there certainly is a better way to get through it all. For those flying first class on American Airlines transcontinental or international routes out of JFK, the airline unveiled their new Flagship Lounge today, which will elevate the nations’ largest carrier to share similar airspace with the popular British Airways Concorde Lounge at Heathrow, or Cathay Pacific’s The Wing at Hong Kong International.

The Flagship Lounge is replete with the expected comforts and conveniences, like a separate check-in facility, charging stations never more than an elbow away, the latest in electronic barista stations, a self-service bar, a perpetually refreshed buffet with 5 hot and more than a dozen cold dishes, a quiet room, a fancy cocktail station and a wide variety of seating from loungers to diners to booths and even a row of adorable, semi-private beehive pods. But unlike some international lounges, you’re not going to find a private cabana, a shoe-shine, a haircut, a massage (or any other indulgent services of a personal nature). 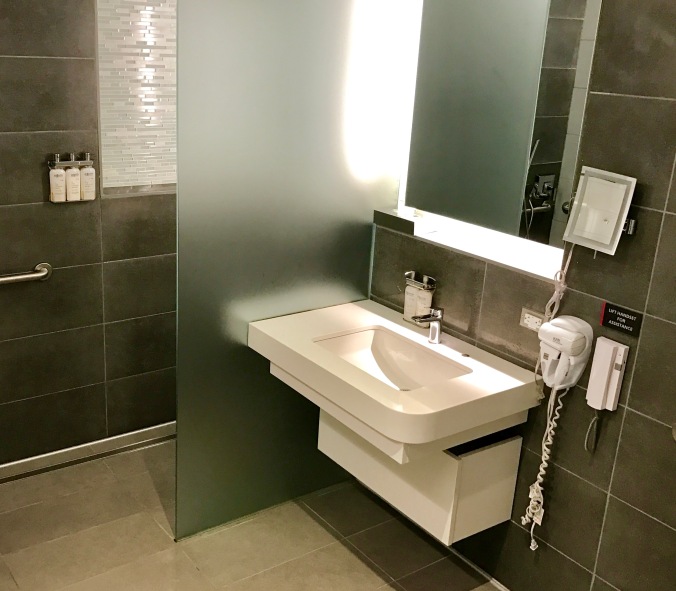 Despite the fact that the décor is almost entirely color and warmth deprived (would it have killed someone to shlepp in a palm or a vessel of succulents, or anything green other than that bottle of Chartreuse between the Campari and the Bourbon?), it certainly makes up for in space and light. The generous, but highly considered variety of textures and finishes from leather to mosaics, bright woods to shiny pressed metals are all offset by the pervasive plethora of durable fabrics (in what seem to be limitless shades of gray, fawn and brown), built to withstand the impending avalanche of traveler abuse. And while the 8 bookable showers are spotlessly modern, I challenge the design team to find somewhere to spread their belongings out, while washing away a virtual thrombosis after 13+ hours of mid-Atlantic turbulence.

But none of that should overshadow the real moment of truth in what is without doubt another aviation first: American Airlines has dared to install the first ever, fully functioning restaurant kitchen inside an airport terminal. In a nutshell, there is no better meal to be had in any of the 8 terminals surrounding JFK airport than Flagship First Dining. With (mostly) locally sourced ingredients and a menu that extolls the virtues of regional flavors with some international destination-inspired dishes, chef Scott Keats has created the first gourmet airline dining experience before you even leave the ground.
There has been endless dialogue about the state of our taste buds at 35,000 feet, prompting airline catering programs to introduce highly sophisticated flavor profiles that continue to push the envelope within the limitations of what can be re-heated in the galley of a 777. But let’s say your flight is delayed until the storm passes and you are stuck at the airport for another 3 hours. You snag one of the 10 single seat window-facing tables or a 4-person booth and sit down to real cotton linens and regular sized flatware as you peruse the menu of a dozen options – all complimentary, of course!

It only takes one bite of the perfectly tender Smoked Duck Breast with a deep, rich, woodsy flavor, wonderfully accented by the fruity-jammy au jus and punctuated by the chef’s take on a colorful succotash to realize that this dish wasn’t cooked last month, flash-frozen and trucked in from Minneapolis. The roasted tomato coulis anchoring three Arancini is delectable, but the “rice balls” (as the waiter referred to them) could do with a sprinkle of seasoning.

Chef Keats makes a passionate argument about environmental impacts and sustainable farming, but then the other shoe drops when the magnificent Loch Duarte Salmon gets flown in daily from Scotland! He presents it medium-rare with a splash of broth along a soft pudding he calls “cauliflower risotto”, which is nice and rich and indulgently cheese-laden, but probably requires more of a spoon than a fork to reach the mouth with any dignity. 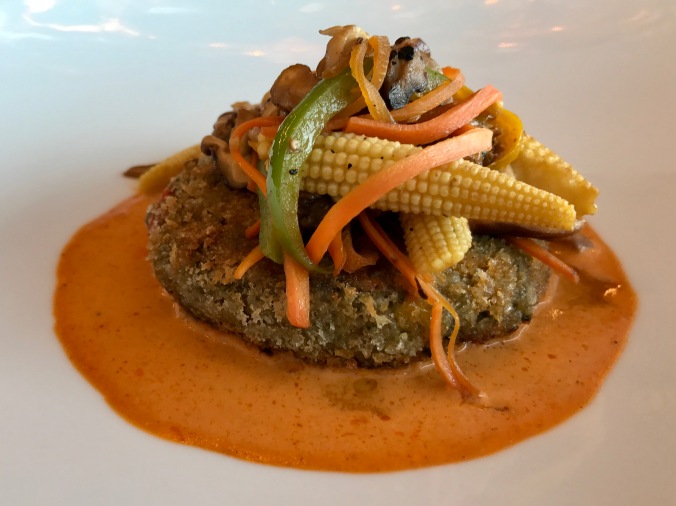 While there is only one vegetarian entree, it’s a damn good one. I used the last remnants of what was one of four bread roll options (that were offered without name or description) to mop up the delicious ginger sauce surrounding the Lentil cake covered with sautéed mushrooms and baby corns.

And probably the most traditional of all entrees – the one that’s impossible to serve at altitude – will become the signature dish on all future Flagship First Dining menus in Miami, Los Angeles, Dallas and London – the Flagship Burger. “I really wanted it to be…unctuous,” Keats proudly declares of his moist, 1.5” thick sirloin patty, cave aged cheddar melt and immaculately sweet-and-spicy maple bacon marmalade.

Despite the unavoidable first day service jitters with wait staff who have yet to find their hands, feet, eyes and ears: when to refill a glass (before it’s empty), when to serve the condiments (before the dish has been consumed), or when to remove the silverware (not moments before they are about to be needed), this first foray into gate-side dining is bound to catch on at supersonic speed. I also predict some edits to the menu based on popularity and demand. (Did I hear someone ask for a pasta…?)