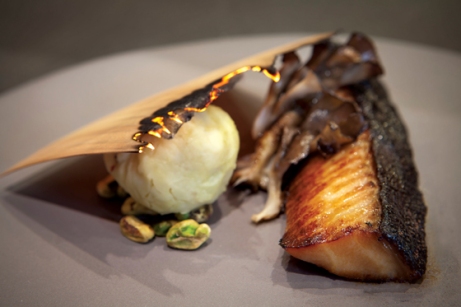 Tucked away beneath a condo tower just beyond the eastern edge of the 20th Century Fox backlot, you might discover one of the greatest stars this town has ever unveiled. Hinoki and the Bird – brainchild of Sona and Comme Ca chef David Myers and Kuniko Yagi, (a waitress-becomes-a-chef success story of her own) is a surprise-filled candy-box of an east-meets-west bistro defying any other SoCal dining experiences heretofore.

Hinoki and the Bird, Los Angeles

As my eyes adjusted to the darkness, I was struck by the expanse of unfinished Japanese cedar wood planks (Hinoki) lining the walls, doors and floors, that under less subtle direction might have resembled the inside of a cuckoo clock or the Unabomber’s cabin, but Myers’ attention to detail and the pools of amber light and shadows creates a formative oasis – just rustic enough for an after-work foo-foo cocktail – yet utterly sophisticated enough for an original and transformative dining event.

Chef Yagi’s varied menu bounces between the familiar and the exotic like a restless ping-pong ball, from all across south-east Asia, with dominant overtones of her Japanese heritage to her adoptive California. Things start calmly enough with a raw bar including a silky Beef Tartare spiked with pickled jalapeño, and a couple of sashimi’s. Not being a huge fan of raw fish with fruit, the popular Hamachi seemed a touch out-powered by the intense sweetness of persimmon and pomegranate, but who cares when you practically gorge yourself on a milky, cheesy, yoghurty Japanese ranch dip on the backs of Dutch Potato Chips?

We were issued deliberate instructions along with the nugget-sized Lemongrass Lamb Sausages, to tear off a piece of the hoja santa leaf they rode in on, bundle them up, and then dip them into the chili-lime sauce. As the complex flavors and textures began to unfold, from the furry aromatic leaf to the citrusy sauce surrounding the succulent meat, even the avid non-lamb-eater at the table couldn’t resist but to reach for more.

I couldn’t contain my curiosity as to why a sub-section of the menu is called Inspiration! I was politely informed that “those are dishes inspired by flavors from around the world.” Hmmm, which would suggest that all the other dishes must have been inspired from…someplace else? Regardless, this menu-within-a-menu includes notable signatures such as Coconut-curried Mussels with shaved cauliflower and crumbled sausage, and the conversation-stopping Hinoki scented Black Cod with maitake mushrooms and shishito peppers – which arrives with a thin canopy of burning wood, delivering wafts of smoldering cedar smoke over the delectably sake-laden and wonderfully juicy, miso-flavored fillet. Sake is also to blame for the fate of the impossibly tender and ridiculously delicious Drunken Duck Breast that could quite easily be sliced with the back of a spoon.

Of all the times I have ever enjoyed Short-rib (and there have been numerous), I don’t believe I’ve ever heard of it braised in cumin and coriander before. Chef Yagi if you’re reading this, please grant your Curry Short-rib special a permanent spot on the “Inspiration” section, as this has to be the most inspired and original execution of one of my favorite cuts of beef.

There is nothing particularly remarkable about the names of the ample side dishes, but their preparations are so astonishingly original, it felt as though our table clocked a million frequent flier miles into the future: the rice is neither steamed nor fried – it’s grilled, the roast potato with crème fraiche and crunchy lardons is a toffee-sweet yam, the bok choy is smothered in lemongrass and shallot, the swiss chard on steroids is all about the sesame. (Somebody, stop me!)

In addition to the Ice-creams, Sorbets and Mochi’s, desserts include a multi-textural death-by-chocolate Ice-cream Sandwich and the curiously salty and feather light-and-fluffy Miso Donuts with a sublime honey flavored caramel dipping sauce – the kind you can spread on an old shoe-brush and still enjoy.

Hinoki and the Bird, you are without doubt my restaurant of the month!