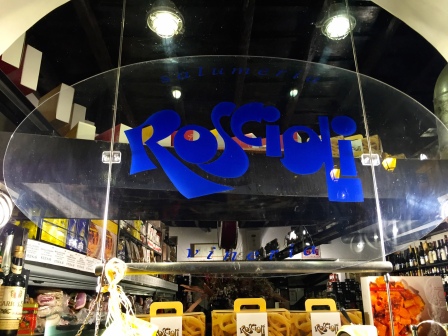 Rome is a city of many mysteries, but the biggest one has to be why it’s almost impossible to find a truly great meal here. It’s not that there’s anything wrong with Roman food. Quite the contrary. But it’s easier to find a noodle in a quarry, than a lazy trattoria that doesn’t just throw some dry Barilla into a pot and stir it up with a few pieces of burnt garlic and cheap olive oil, and convince the tourists that it’s the best Aglio Olio in town. But I digress. Regardless of all those other suggestions on your list from colleagues, in-laws or tennis partners, no trip to Rome would be complete without at least one meal at the utterly sublime and completely unforgettable Salumeria Roscioli, which is like being invited to the wedding of simplicity and quality. 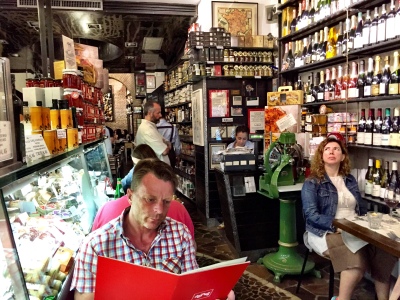 The establishment is principally a high-end purveyor of meats, cheeses and wines, but they also have 2 sittings of reservation-only tables for diners who promise (repeatedly) to arrive and leave on time. Once you get over the fact that you are sort of in the way of a bustling retail business that slices, weighs and sells hundreds of kilograms of antipasti and alimentari to Roman shoppers carrying babies, dogs and duffle bags, you realize two things: you are in very good company, and no-one gives a damn about anything except the food.

The menu rambles on for page after page of infinite preparations and combinations of many of the most famous local heroes: sardines, buffalo mozzarella, semi-dried tomatoes, prosciutto, carpaccio, crudo, artichokes, olives etc. By page 5, I became slightly concerned that all this time spent reading was going to cut into my strictly allotted 1 ½ hour time slot for eating. So I relinquished control to our curly-edged-moustache sporting waiter Salvatore. Sal personified your typical Roman, best represented by an Arancino – a hard, crusty, deep-fried shell with a soft, warm and creamy risotto center within. Our first confrontation involved his refusal to serve me the bottle of Amarone Valpolicella I had selected. (In my opinion a solid, fruit-forward wine with hints of raisins-in-the-sun that goes well with just about anything Italian.) “No. Not this one,” he snapped in his priceless accent. “Not good one. But this one…” he declared with a wry smile, pointing to a reasonably priced 2012 Barolo, “…this much better one. You trust me.” And that was that. He slammed the wine list shut and snatched it out of my mortified hands, disappearing behind a clutter of clients. 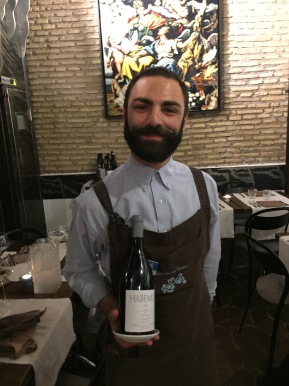 And so it turned into that kind of an evening, where our waiter clucked and scoffed at most of our suggestions – only to utterly charm, disarm and delight us like a magician with an endless litany of wondrous tricks that kept us ooh-ing and aah-ing in an Italian accent all night long. 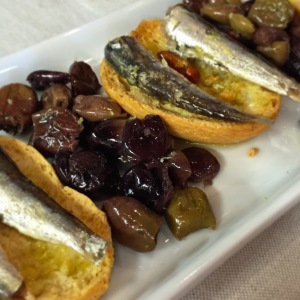 We started off with a very traditional Bruschetta topped with the most deliciously briny Cantabrian Sea sardines and olives on toast, with a thick layer of vanilla flavored sweet butter from San Maló. 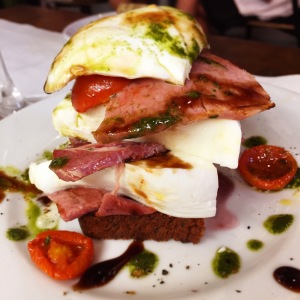 This was followed with the incredible Mozzarella “Hamburger” – an all-time favorite with three thick slices of fresh and fluffy mozz separated by seared, sweet ham, tomato and a yummy sweet-and-sour balsamic glaze. 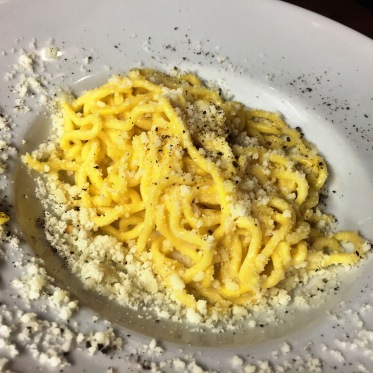 We knew we had to try the magnificently flavored and prolifically marketed Pasta Cacia e Pepe, which was as dreamy as any three-ingredient dish could ever hope to be. 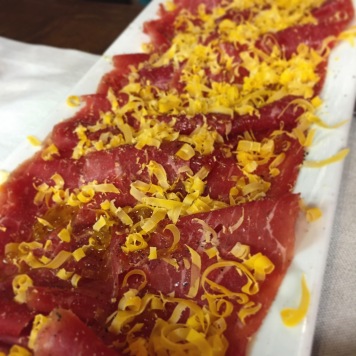 The curiously labeled “Nebraska” Beef Carpaccio was another rare intersection where heaven meets earth in the form of a semi-transparent, chianti colored slither of citrusy smoke-cured meat, littered with dark orange curls of 24-month aged Mimolette cheese. The worst part of this dish was that it eventually came to an end. 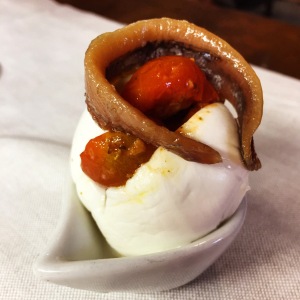 We couldn’t help noticing a pair of hands (and from where we were sitting, we couldn’t see who they were attached to) repeatedly slicing a small slit into the top of a ping-pong ball sized boconcino, and then jamming it full with semi-dried Pachino tomatoes before finishing it off with a curled slither of anchovy. Before I could ask Sal why we didn’t order one, he surprised us with a couple of samples. Each bite burst with a sharp, salty jab, followed by a milky cream and finally a sweet, caramelized tang. 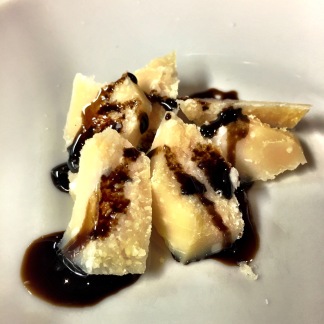 Our next course began with what looked like a virtually empty perfume bottle. “Don’t touch!” Sal commanded, before returning with a plate of cave-aged Parmesan chunks. He (ever so cautiously) splashed them with a few precious drops from the bottle – which turned out to be 20-year aged Balsamic. The utterly incredible combination of the salty, sharp cheese with the rich and tart vinegar left us breathless with wonder as to how something so simple could taste so incredible. 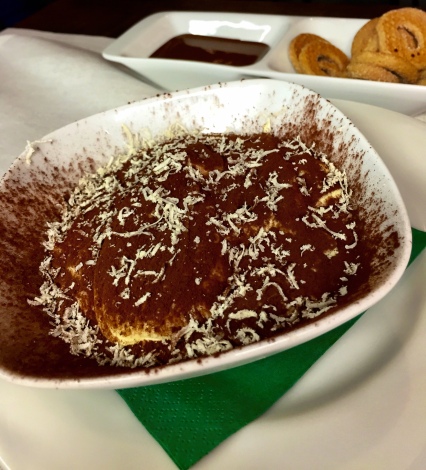 Tiramisu with Biscuits and Chocolate dip

According to Sal, our first dessert was going to be the “…best Tiramisu in all over Rome,” and he might very well be right. The shorter than normal slice almost completely sacrificed the biscuit layer for an espresso flavored, twice as thick (and decadent) mascarpone cream topping, which felt like a five year vacation on a private island where an ocean breeze gently wakes you at around noon.

And just before we surrendered, a small dish of home made ring biscuits showed up with a warm, thick, sweet and lusciously creamy chocolate dip. We’re talking about an instance of bliss where the noise of the world suddenly goes quiet. The traffic, the tourists, the music, the stock-market, even old Italian grandmothers rolling fresh pasta in small apartments upstairs have to pause to appreciate this incredible, edible moment.