In a world dominated by mega franchises and celebrity-chef chains, it’s refreshing to see a handful of new and original dining options emerging deep in the heart of Texas. Dallas might be proud of her storied reputation for Barbecue, but I stumbled upon a couple of culinary standouts that are taking the city of big hair to even bigger heights.

Curiously suspended in mid-air like a golden-tiled hornet’s nest clinging for dear life to the 3rd floor of a downtown office tower, is an oblique chocolate box that is home to Michelin star chef Bruno Devaillon’s newest bistro – Bullion. It’s hard not to wonder what a French bistro might be doing just a block-and-a-half from the Kennedy assassination site, and after overhearing a fellow diner climbing down from her white Yukon Denali proudly exclaiming: “I eat French food all the time. French fries. French toast. French bread. All of it!” I couldn’t help wondering just how much chef Bruno might have to “Tex-ify” some of his Franco masterpieces. But my fears were unfounded. After ascending the spiral stairway, you leave Texas behind you for an hour or so, and find yourself in a cruise-ship styled cocktail lounge that leads via the pastry rack to an ornate, yet unpretentious dining space with dark woods and golden trims, somewhere along the border of cosy and chic. 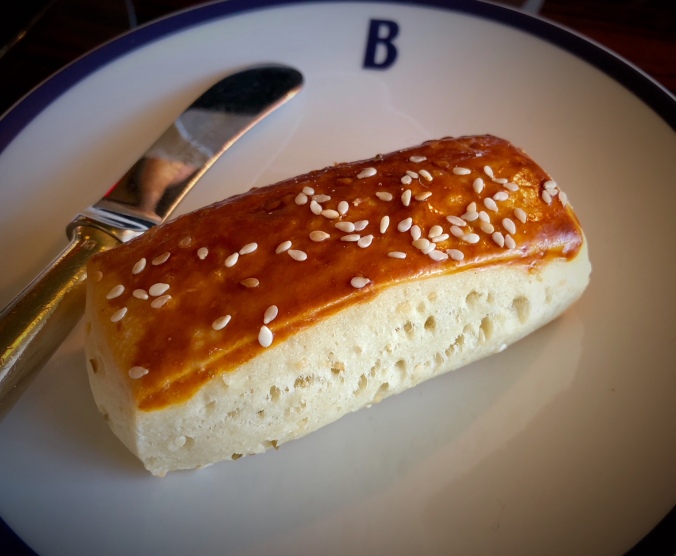 The menu reads like any you’d find along la rive gauche with a few contemporary items wedged between stalwart classics like a hearty saffron and tomato Bouillabaise with a mix of seafood shells and scales served with shards of grilled country bread, and an immaculately charred Foie Gras Torchon complete with berry marmalade and squishy brioche. But nothing gets a table arm-wrestle match going like a bowlful of the most amazing Gougéres au Gruyere. These caramel colored puffs are lighter and fluffier than a cheerleaders’ pom-pom. And as they go about their miraculous disappearing act, it feels like a kiss to the lips from a cheese-dusted feather.

I was intrigued by the notion of a leek salad and so had to try the Poireaux, which features a regimented row of steamed leeks trying their best to impersonate white asparagus, dotted with soft goat-cheese and roasted hazelnuts in a super light truffle vinaigrette.

Even though this is grill country, the sumptuous Tournedos filet mignon with potato gratin and a trickle of mild oxtail au jus is an extraordinarily smooth cut that submits its salty umami without resistance. 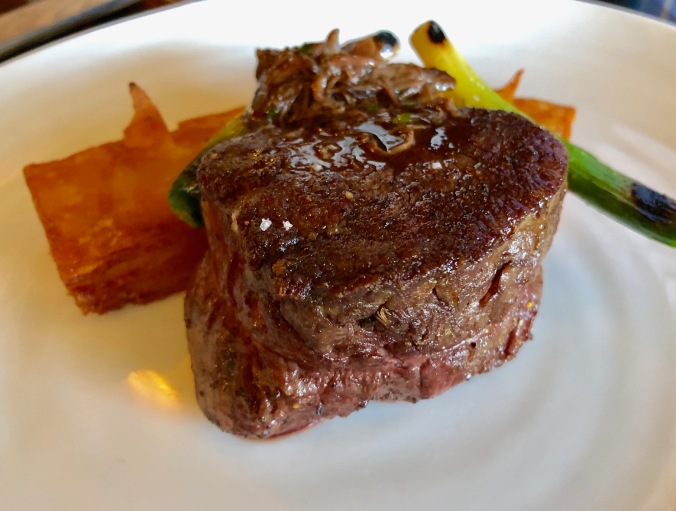 The Cabillaud & Brandade awash with a tart tomato and caper confit is just light enough not to kill the subtle cod flavor, and the Agneau is an incredibly toffee-tender lamb loin, very gently accented with a sparkle of anchovy vinaigrette, accompanied by a bright and crunchy summer succotash. If you haven’t picked up on it yet, there was enormous restraint from over-flavoring the food – true to the kitchen’s mission to prepare dishes that don’t overshadow the key ingredients. Even the table-side flambéed guava and coconut ice-cream centered Baked Alaska is meek, mild, subtle and delicate. 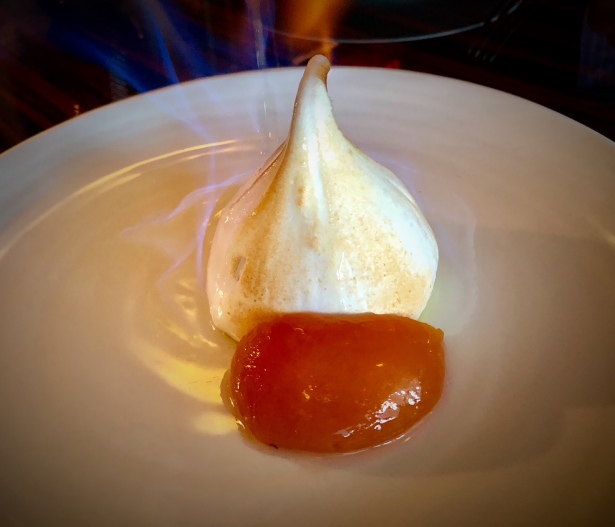 Foxyco, chef Jon Steven’s latest effort in the Design District, is anything but meek and mild. His 6-week old second act following nearby neighborhood darling Stock & Barrel is a bucking bronco of runaway flavor. He coyly describes it as “modern American”, but that seems far too reticent for his brave, adventurous and (dare I say) aggressive approach to breaking rules and ignoring conventions. Even as you walk into the monochrome open space flanked by a massive mural that could be the result of a toddler’s paint party or a wannabe tribute to Jackson Pollack, you smell wafts of hickory coals emanating from his open kitchen. He’s obviously having loads of fun flexing his dexterous abilities with a mélange of cooking styles ranging from sous-vide to wood-fire grilling, to both at the same time! 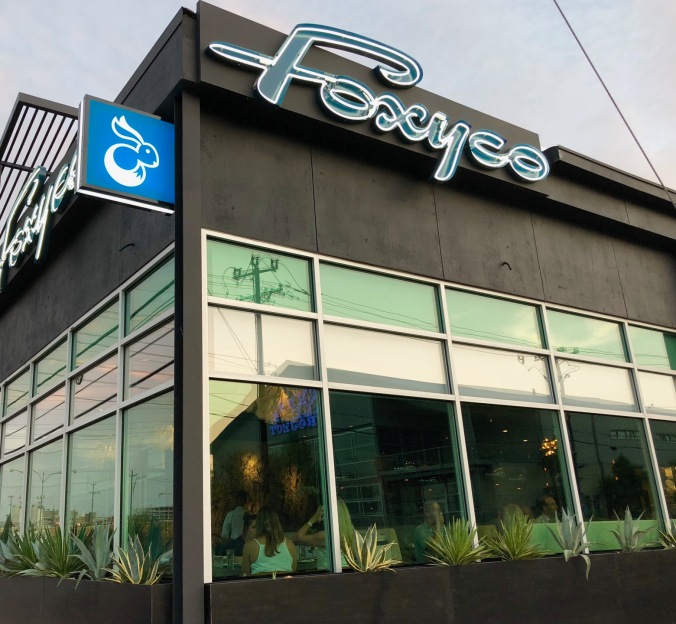 The menu is a tornado of way too many “must try” items like a red curry and Thai basil Warm Crab Dip, or a Farro Risotto, or perhaps a crab and hazelnut Squid ink Spaghetti (which will hopefully still be there on a return visit). I finally landed the plane on two starters, a main and a vegetable. 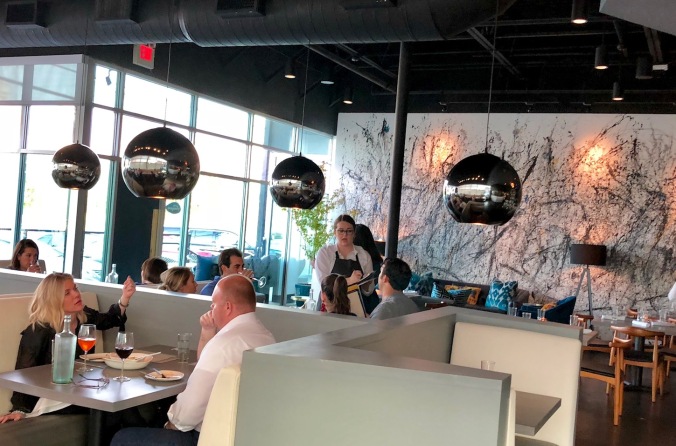 First to emerge was an astoundingly delicious row of 4 cubes of crispy rice-cakes supporting a mound of miso-marinated Big Eye Tuna Tartare topped with basil, cilantro and a grate of lemon.

Just as I was recoiling from the electric jolt of Asian flavors, a gorgeous snowball of scrumptious Burrata sailed in, surrounded by a bed of harissa and orange blossom infused olive oil. But the deal-clincher was the sprinkling of mint, salt flakes and honey-comb on top. That’s it. From now on, everything I eat will have to be topped with mint, salt and honey-comb. 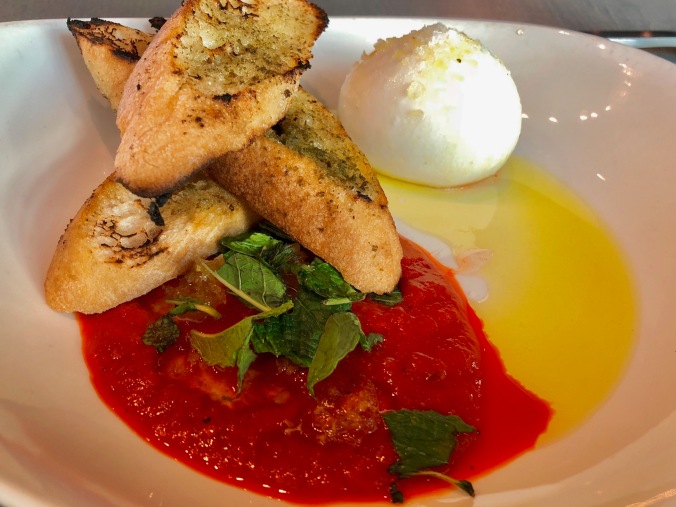 As I waited for my Wagyu Short rib, contemplating how slowly it must have cooked in a sous-vide bag for 72 hours before being espresso-rubbed and then flame grilled to fall-apart perfection, the three strands of saffron continued to stain my Canary gin and kaffir lime cocktail a soft and rosy shade of gold.

Needless to say, the combination of shaved horse-radish with pickled onions together with an anchovy salsa verde elevated the incredibly beefy flavor of the Wagyu – just the way meat used to taste in the olden days. Switching back and forth between the short rib and a heap of corn-flour dusted florets of Fried Cauliflower anchored in a spectacular cilantro-heavy green goddess dressing with parmesan and shaved dates felt like juggling between diamonds and rubies.

So next time you’re passing through the big “D”, consider a bold detour from in-room dining. Because there’s more than oil in them there hills.

One thought on “Good eating in Dallas”